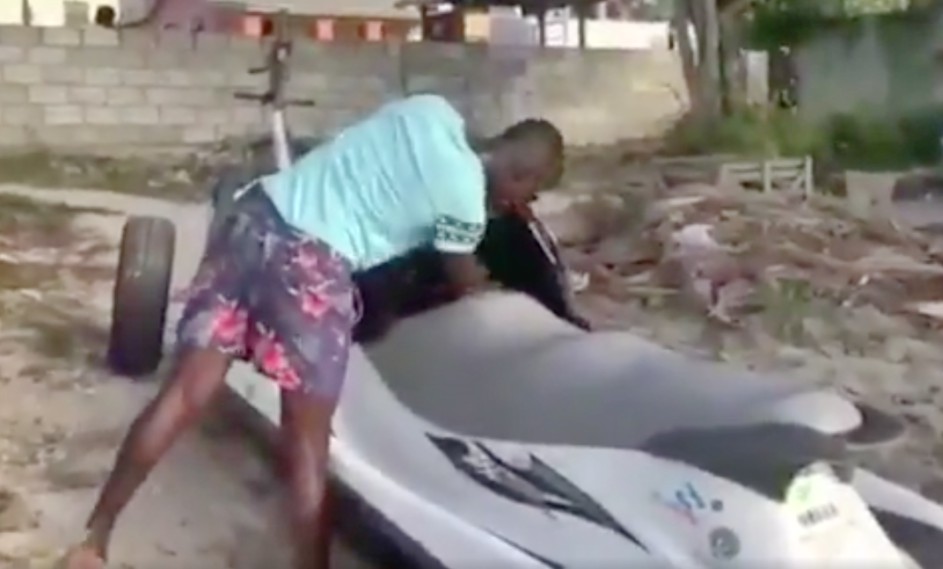 Still shot from the viral video.

Minister of Tourism and International Transport, Kerrie Symmonds has offered his two-cents on a video which has gone viral on social media involving a local jet-ski operator and two visitors to the island.

The video shows the operator and a man, believed to be Scottish, in a heated exchange of words on a West Coast beach. The operator is heard telling the visitor a number of obscenities to which the visitor responds,

“How do you think your Tourism Board is going to appreciate this?”

Minister Symmonds spoke to the media on the sidelines of the Grantley Adams International Airport Expansion Project launch at the Caribbean Development Bank today, where he admitted he did not have background information on the video but he is appalled that the situation escalated to that level.

He said he has heard of similar incidents which have occurred in doctor-patient and lawyer-client relationships which highlights a disturbing trend amongst Barbadians.

“I believe I will hear that there are extenuating circumstances … justifications which can be advanced but I believe what we are dealing with is a situation that goes beyond how you treat a tourist.”

The Minister said “none of us would want to go anywhere and be treated like that". He admonished Barbadians to learn to “disagree without being disagreeable” when interacting with each other as well as visitors to the island.

“If the sno-cone vendor puts too much syrup or the wrong colour syrup, he is likely to be greeted with a similar type of torrent of abuse or if the bread man has a dispute with his client, that too will happen and it goes right up the scale.”

He added the video shows a “display of incivility that went beyond that which is reasonable”.

Minister Symmonds did not reveal if complaints about the exchange were made by the visitors to the local tourism board or to the Royal Barbados Police Force (RBPF).