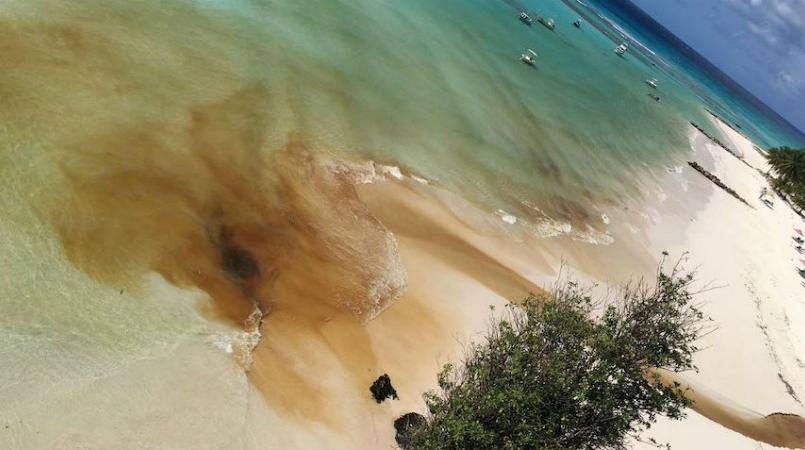 Water quality monitoring tests of Worthing Beach and Sandy Beach conducted by the Environmental Protection Department (EPD), show there are no adverse bacteria present in the waters.

Public health concerns over the safety of bathing at Worthing Beach have been addressed by the Ministry of Environment following a series of tests conducted over the last two weeks.

Acting Director of the EPD, Anthony Headley delivered the findings during a multi-sector press briefing held in conjunction with the Barbados Water Authority over the weekend.

Headley said the EPD took marine water samples on four occasions after the sluice gate on Worthing Beach was opened on December 2-4. The samples were taken on December 5, 7, 12 and 14 from three different sites- opposite the sluice gate, opposite Crystal Water Beach Bear and Sandy beach south.

The samples were then used to test for the bacteria enterococci and faecal coliforum both known to cause a number of stomach infections. Headley said according to the United States Environmental Protection Agency (USEPA) standards the average units present in marine waters for the enterococci bacteria should not exceed 35 colony forming units (CFU) for every 100 milliliters of water and the faecal coliform should not exceed 400 CFU per 100 ml.

“For the enterococci results for all four sites, none of the samples exceeded 16. For the Faecal Coliform results the maximum results we received from the sampling program was 220.

So it is clear that all of the beaches, all of the samples during the period after the incident were well within the USEPA standards we have adopted.”

Chief Medical Officer in the Ministry of Health, Dr. Joy St. John said environmental health officers have been doing on the ground assessments to ensure the sewage overflow posed no health risks to residents or employees in the Worthing area.

"We were especially concerned about any potential back up into any of businesses rather than just in the car parks. We were able to find out that that was not the case, there were no backup in any of the restaurants. That is why our only action so far was the closure of the beach.

There were a range of complaints that could have surfaced, none of them surfaced through our surveillance system.”

It was also announced during the press conference that the South Coast Sewage Treatment plant will be upgraded at a cost of $2 million.