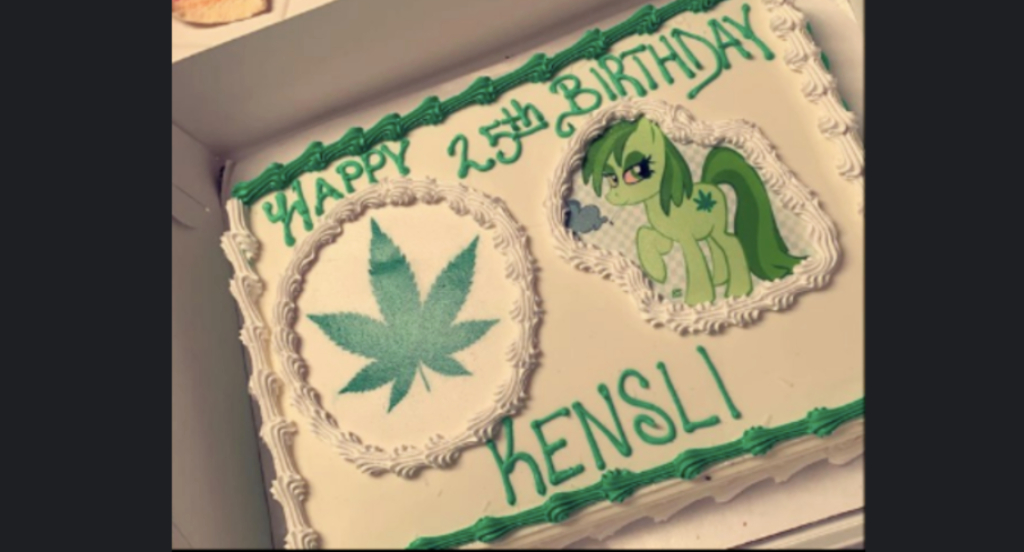 Creative marijuana designed cake for a client who loves cartoons.

"An honest mistake" led to thousands of laughs until a cake designer was fired for doing a Marijuana-themed birthday cake for a 25-year-old, instead of a Moana-theme as requested.

Seems that when Kensli Davis' mother called the Milledgeville, Ga. Dairy Queen to order the cake, the shop employee heard “marijuana” instead of "Moana".

The fast food restaurant served up a cake with a giant marijuana leaf design, green icing and a My Little Pony-style character with bloodshot eyes and a puff of smoke.

"I think they just misheard my mama when she ordered the cake, she has kind of an accent with us being from the south,” Davis told CTVNews.ca via Facebook messenger.

Davis said her sister picked up the cake and called their mom the minute she opened the box to let her know what had happened.

“They all started laughing. We weren’t mad or anything, that’s why we didn’t call back and tell them obviously a mistake had been made,” Davis said. “We thought it was the funniest thing that could have happened and we knew it would be a birthday to remember.”

But why the Little Pony?

“I think they put the little pony on there because my mama told them I loved cartoons so they thought to just throw a random cartoon character on there," she said.

Davis posted about the incident on Facebook, writing: “So my mama called and ordered me a cake telling them how much I loved Moana. (Because really I do) Well needless to say these people thought she said marijuana,” Davis wrote on Facebook.  “That ice cream cake was still good though.”

While the Dairy Queen workers apologised and offered to make another cake, Davis declined the offer.

She said despite the error the first cake was good.

Media reports, however, state that Cassandra Walker who designed the cake was fired for the mishap.

In a statement, Dairy Queen said:

"This was a simple misunderstanding from the beginning. Our cake decorator designed a cake based on what she thought she heard the customer order. When the customer picked it up and said it was not what she ordered, we immediately apologized for the error and offered to redesign it the way she originally intended. The customer said it was fine, paid for the cake and left."

Trinis win award for Best Tasting Cake in the World