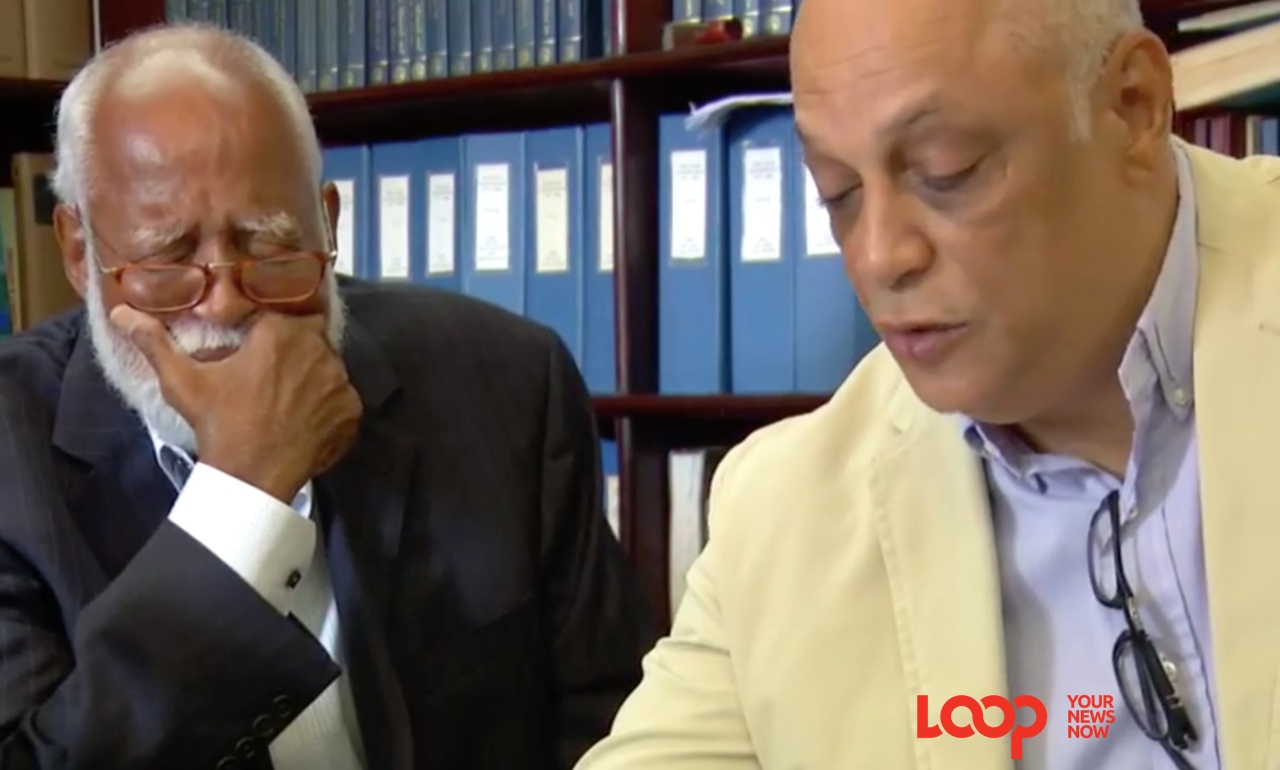 One father has swooped in to set the record straight and remove any shadow of doubt from around himself and his daughter's actions as it relates to a more than 20-year-old tax issue.

Sir Elliot Mottley Q.C yesterday called an emergency press conference at his offices in Strathclyde and as he read a statement he was so overcome by emotion that his son Warren Mottley had to complete the task on his behalf.

Opening the meeting was Mottley's lawyer Roger Forde Q.C. who made it abundantly clear to Loop that his client will be suing for defamation as a result of the statements made and published about his client and his daughter.

Related article :Lawyer says that defamation will not be accepted

Having took issue with what was said by Former Prime Minister Owen Arthur in his own press conference on Monday, May 14 at the headquarters of Barbados Today in Manor Lodge, Mottley took the mic and stressed:

"Mr. Arthur was clearly referring to the procedure for waiver for a duty or tax under the Duties, Taxes and Other Payments (Exemption) Act CAP 67B of the Laws of Barbados.

"I, Elliott Deighton Mottley, categorically state, that, at no time did I ever apply to Mr. Arthur for a waiver of arrears of INCOME TAX which I owed the Inland Revenue Department, as it was then called. In the correspondence to which I will refer you will note that no mention what so ever is made of a waiver of Income Tax."

"On 29 September 1995, Mr. Haynes wrote a letter to the Ministry of Finance and Economic Affairs applying under the INCOME TAX ACT, Cap 73 - not the Duties, Taxes and Other Payments (Exemption) Act - for a waiver NOT OF THE TAX DUE BUT of the INTEREST AND PENALTIES that had accrued and were causing the debt to mushroom."

Mottley said that he was granted permission and proceeded to repay his outstanding monies. He said, that in March 1997, his rep, Haynes received a letter from the Permanent Secretary, Finance, June Chandler stating that, "I am to inform you that the Ministry of Finance and Economic Affairs has considered the application and it has been decided that Mr. Elliott Mottley Q.C. will be allowed a waiver of the interest payable in respect of outstanding Income Tax on the condition that the outstanding principal and penalty is (sic) cleared on or before March 1, 1997."

By way of remittances from Bermuda he said he worked to put a dent in the debt. However, he "also took steps to repair and sell my house with the intention of liquidating the debt from the net proceeds of sale."

With the sale of the house taking longer than expected Mottley attained the services of a team of attorneys who once again wrote the Ministry of Finance for an extension on the waiver of interest to May 15, 1998. And the additional year was granted.

He said that the letter stated:

"I am to inform you that the Minister of Finance and Economic Affairs has approved an extension of the time period given to your client Mr. Elliott Mottley, to clear his income tax liability.

"You are hereby advised that Mr. Elliott Mottley Q.C. will be allowed a waiver of the interest payable in respect of outstanding income tax on the condition that the outstanding principal and penalty is (sic) deemed (sic) on or before May 15th 1998.”

Related article :WATCH: The BLP will not be distracted, stresses Mottley

On completion, he said that "15 May 1998 the acting Commissioner of Inland Revenue, Mr. Frank Forde issued a Memorandum of Satisfaction, witnessed by Miss Jennifer Edwards, Deputy Solicitor General, acknowledging that he “received a sum of $585,280.28 in satisfaction of the sum of $1,031,284.37 due under a judgment obtained herein on 23rd day of January, 1995, the interest thereon having been remitted in accordance with the provisions of the Income Tax Act, CAP 73 of the Laws of Barbados.

Mottley said that those two Memoranda, together with the letters sent on behalf of the Permanent Secretary of Finance, are clear evidence "that the Minister of Finance, as he was empowered to do under the INCOME TAX ACT, waived the interest BUT NOT THE TAX OR PENALTIES. I wish to reiterate that at no stage did I make any request of the Minister of Finance to waive any tax on my behalf and at no stage did I receive any waiver of tax."

Therefore, as he made his case and sought to further put to bed all uncertainty, Mottley teared up when he spoke to assure that his daughter is not caught up in this fiasco in any shape or form.

Mottley tried to finish his statement saying, "and for the avoidance of doubt, I also wish the Public to know that at no time during the period 1994 to 1999 did my daughter ever act..." Here he lost his composure, hitting the table with his fist as he fought back tears and was overwrought with emotion.

Warren took a seat quickly, took the script from his dad and read, "And for the avoidance of doubt, I also wish the Public to know that at no time during the period 1994 to 1999 did his daughter, my sister, Mia Amor Mottley, ever act as Minister of Finance and Economic Affairs of Barbados. Copies of the Official Gazette will corroborate this statement."

Stewart, Mottley's other son was present at the press conference as well.

Mottley not taking anything for granted in upcoming Election