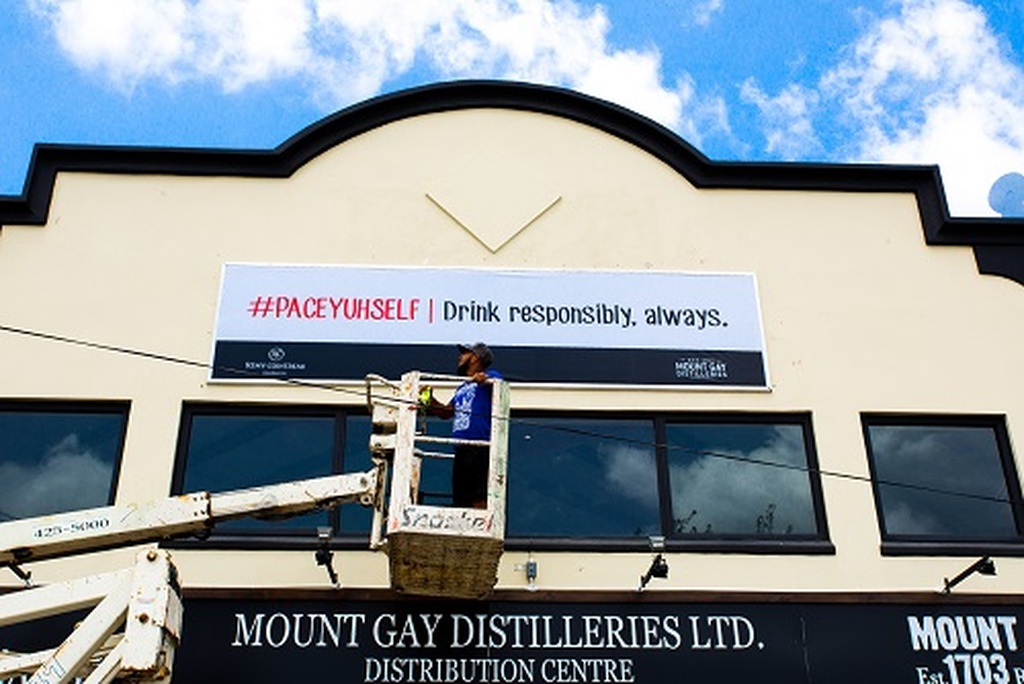 An extensive campaign to encourage Barbadians to drink responsibly titled ‘#PaceYourself’, has been launched by Mount Gay Distilleries for its current financial year.

Commercial Director for Remy-Cointreau Barbados, David Sealy, said that as the oldest rum producer in Barbados, now celebrating 314 years, Mount Gay decided it had a responsibility to ensure that the society is consuming its product responsibly.

He noted, “One of the biggest challenges that we face in Barbados is that there are no real national monitoring systems for alcohol consumption or alcohol purchase. As a result, we have decided to launch a campaign that is not necessarily a Mount Gay rum campaign but a Mount Gay Distilleries.”

“One of the communications that will be seen in the press, on television, at bus stops and all over the country will be the message ‘Make the good moments last forever, know when you’ve had enough, good memories, good times, good vibes. ‘#PaceYourself. DrinkResponsibly’.”

He said that social media will be used to reach the younger target market, the 18 to 25-year-olds, and in the marketing of the campaign they will also take some key influencers in society and ask them to speak about social responsibility and responsible alcohol consumption. Already on board for this purpose are Stiffy, Toni Thorne and Salt, whose message to young people will be to enjoy themselves but to do so responsibly.

Sealy also revealed that they are already taking the message to all Mount Gay-sponsored events going forward including during Crop Over by providing organisers with biodegradable cups bearing stickers with the hashtag #PaceYourself. The aim is to have that hashtag engrained in everyone’s mind.

He added, “We will be launching two other initiatives along with the campaign. One will see us teaming up with the substance abuse organisation and going around to schools and tertiary level institutions to talk to students about alcohol consumption.

Mount Gay rum production started in Barbados in the year 1703 and has been produced with passion and unparalleled craftsmanship since then, earning for itself the title “the rum that invented rum”. Expertly crafted from the rich sugar cane and pristine, coral-filtered water, it is a spirit with a rich history and true character.

Mount Gay continues to 'give forward' to the community