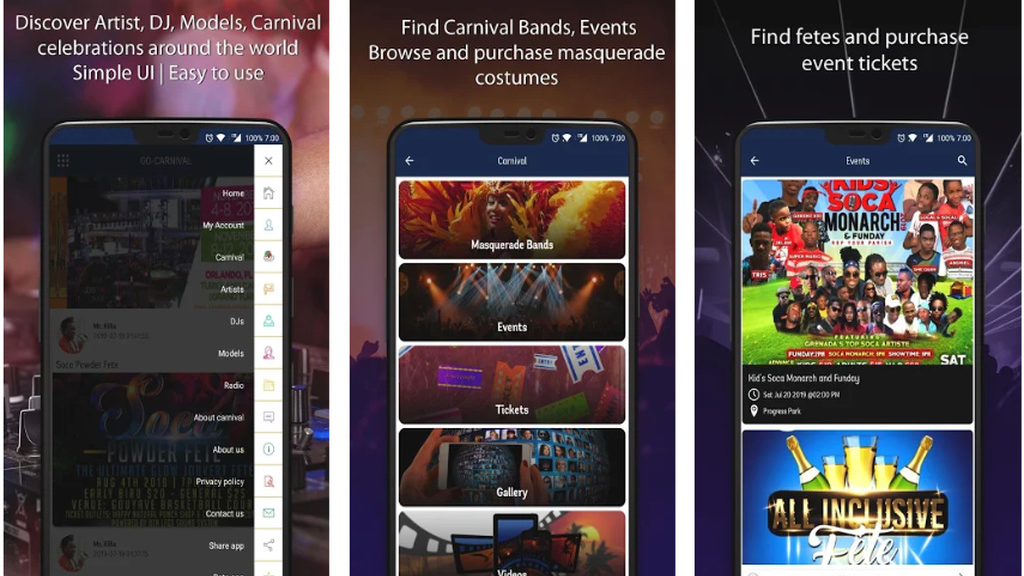 With his Go Carnival app, Mr Killa has provided a platform where people can learn about Carnivals all over the world and stakeholders in the industry can benefit financially.

The app which was launched on Tuesday night at the Hideaway rooftop in True Blue, Grenada, is being billed as the world’s first Carnival app.

It allows users to click on individual countries where there is a Carnival to get information about the location of bands, purchase tickets for events and costumes and get familiar with the music, among other things.

The app also gives service providers such as artists, models, DJs, and others the opportunity to upload information to advertise their services, post their videos and ultimately monetise their content.

A unique feature of the app is the ability it gives users to connect with service providers via Whatsapp. If you click on a Whatsapp number, the app directs you to the platform where you can personally interact with the provider you are trying to reach.

Speaking at the launch, Mr Killa, real name Hollice Mapp, said after years of suffering and working hard to make it as an artiste his dream of being to help others achieve their goals is coming through.

Encouraging all the artistes in Grenada and the Caribbean to use the app to start monetising their pages, Mr Killa said artistes are suffering by not being able to monetise and copyright their music properly.

“So I created an app that will give you the opportunity to upload your songs, your videos from your own page and all of those views will go towards your page and help you grow revenue as an artiste instead of putting it on someone else’s page,” he said.

The International Soca Monarch said a lot of artistes don’t know how to go about monetising their content and he believes they are ready to receive that information because they want to be paid for their work.

Killa told Loop he decided to include all Carnivals such as Brazil’s on the app because he believes West Indian culture is spreading wide.

“I see Carnival different places and I feel if they had more West Indian people that do Carnival in their islands coming together it would be even bigger and greater and expressed differently. Artistes look for the opportunity to perform internationally so wherever there is a Carnival then we are booked so automatically it benefits the artistes. it spreads the culture worldwide and it doesn’t matter who else is doing a Carnival, no Carnival could compare to the islands’ Carnivals,” he said.

The Go Carnival app was developed by Pieces Technology in conjunction with Promo Caribbean, companies owned by Nigel Jones who is Grenadian by birth.

Jones, who is passionate about using technology to promote the Caribbean, said he had approached Killa two years ago with a concept but the singer had another idea.

“He said Carnival and we started brainstorming and here we are right now and this is just the beginning,” he said.

Walking Loop through the app, Jones said it is free for users but for service providers, there is an annual subscription fee which would allow them to create a profile and upload unlimited content.

He said they have approached people such as DJ Puffy and DJ Young Chow who have come on board and are helping to market the app. He said they will roll out social media marketing and will be on the ground in various cities and Carnivals to promote the app.

Jones revealed that following the launch of the app on Tuesday night there were over 300 downloads by the next morning.

Mr Killa focuses on business to push soca to the world