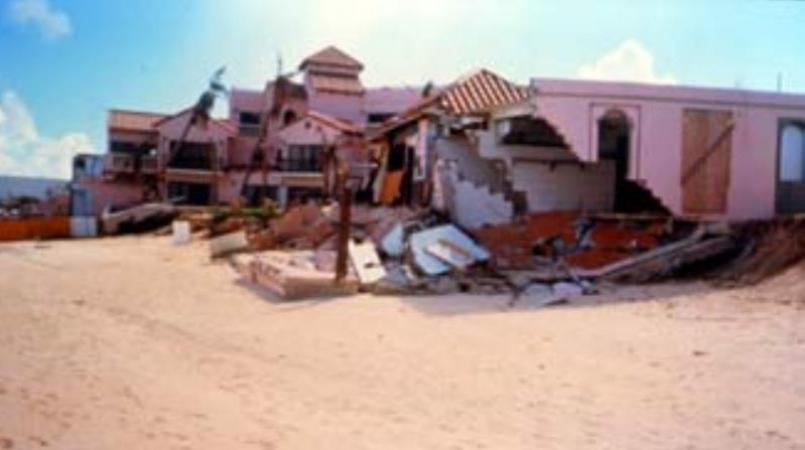 As Barbadians weathered the passage of Tropical Storm Matthew this week, one man recalled his experience with a Category 4 hurricane in 1995.

Related article :Barbados and September hurricanes have a history

Earlier this week, Barbados’ meteorological personnel had been monitoring an approaching weather system and by Tuesday afternoon a national shutdown was put into motion.

The weather system was expected to pass Barbados around 2 a.m. on Wednesday morning and bring with it at least 4 to 6 inches of rainfall. However, the system slowed down overnight and when many Barbadians woke on Wednesday morning to what appeared to be a typical overcast day, some criticised the decision to implement the national shutdown. Some businesses reopened their doors and people began to move around, despite not receiving the all-clear from the authorities.

As the day progressed, northern and eastern parts of the island were lashed with high winds and torrential rain, while flooding occurred in several areas. The all-clear was eventually issued early on Thursday morning and the island gradually returned to a state of normalcy, having incurred little damage.

Despite warnings to stay indoors, some ventured out during the storms – including the daredevils.

Barbadian Matthew Jordan is one who understands the human curiosity to witness the power of Mother Nature, but he told Loop that after experiencing a hurricane first-hand just over 20 years ago, he would never wish to live through it again.

At the time a young, green officer in the Anguilla Police Force, Jordan kept around 30 people safe during Hurricane Louis (Luis) – a Category 4 storm that pounded Anguilla for two days and caused an estimated USD$55.5 million in damage to the tiny Caribbean island in 1995.

He was later awarded a Commissioner's Commendation for his efforts during the hurricane.

This week, he shared his gripping account of living through the devastating storm:

“I was 19 years old and had just joined the Anguilla Police Force the year before.

Hurricane Louis had not too long developed and was headed towards the Leeward Islands. Anguilla hadn't seen a hurricane for decades and we were extremely underprepared for what was about to hit us. They posted me at a Hurricane Shelter in a primary school along with a nurse and a few supplies but I had no idea what was about to happen."

On September 5th, 1995, Louis hit Anguilla. According to the US-based National Hurricane Center, there was a leadtime of about 29 hours from the time warnings were issued until the onset of gale-force winds.

“To be honest, at first I was excited about it – 19 years old, wide-eyed and inexperienced, lots of responsibility put on me.. so was feeling confident, curious and proud. I had to grow up quick in that hurricane!” Jordan exclaimed.

During the first night, 26 people came to the shelter where he was posted – 20 elderly people, one middle-aged man, one wheelchair user and the rest were children. As the storm worsened, the situation became frightening.

“I saw aluminum windows ripped from the cement walls and tossed across the room like a textbook, doors ripped off the hinges and spiral into the air and disappeared, debris flying into the school hall where we sat and smashing against the walls.

“Don't ask me who taught me this, I do not have an answer for my actions after this point but somehow I managed to figure this mess out. I ran across the hall and opened the door on the other side and the debris started to blow straight through the building. That gave me enough time to gather all the people and moved them to a book closet – 26 people inside a small book closet. People were crying, praying, screaming....you name it. I didn't know what to do.”

As the building began to deteriorate, Jordan said he knew he had to find an alternate location for the people under his care.

“I told the nurse that I have to go outside to find somewhere to shelter because the police radios are down and there's no help coming. With a flashlight and a pair of handcuffs (don't ask what they were for) I went outside and immediately knew it was a terrible up idea!

Things were flying everywhere. Things that you don't expect to be airborne were flying like kites. I saw the entire side of a house with window and door skipping down the street and smashing into a tree. I saw the heat extractor from a restaurant kitchen ripped off and tossed through the air. Garbage cans, galvanize, furniture, telephone wires, beds, clothing... you name it – everything was loose and unpredictable. I had no choice but to wait...

Eventually the winds started to die down and the debris wasn't blowing as much as before so I went outside and went up the street and I found a house at the corner that had people in it and I told the lady that I have some people in need of shelter and I have to bring them there.”

Transporting the people from the shelter to the house was another ordeal, as he had to shuttle them in groups of eight or so, battling high winds and poor visibility due to sand from the beach being whipped into the air.

Everyone eventually got to the house safely and Jordan and one of the occupants spent the night standing with their backs braced against the glass sliding door to prevent it from shattering from the immense pressure of the strong winds.

“When the night passed and daybreak came, the winds died completely down. Like nothing was even moving...literally. We thought it was over…” said Jordan.

However, he suddenly remembered the advice from the disaster officials about the eye of the storm and that the winds before and after the eye would blow from opposite directions. He concluded that he needed something to fortify the glass door and asked the homeowner if there was anything they could use. One woman said she had some wood in her nearby home and Jordan “foolishly” decided it was worth the risk to attempt to retrieve it.

“Walking across to the house, the winds started to pick up again – not bad but noticeable. Then all of a sudden these strong gusts started... they were so strong I could hear debris colliding with the house on the outside. No warning at all.

I took cover inside the house in a corner and looked up to see a completely grey sky and some things flying through the air. I figured I would have to go through this because I can’t stay here and I have people depending on me back at the house.

I went outside and started to make my way back, when I felt some extra strong gusts hitting me. A mind told me to grab hold of a pole – the only pole it seemed like on the street and I put both arms around it and locked my hands.

The winds were blowing past and in them was all types of debris including three or so goats that were blown straight over the cliff! I was never so afraid in my life! The other half of the hurricane had started and I was out in the blasted thing!

Eventually those gusts died down and it got tolerable enough for me to scamper back to the house – without any wood, of course!”

Jordan and the other occupants barricaded themselves in the house using whatever large objects and furniture they could move and successfully weathered the storm for the rest of the day.

The hurricane finally passed and Jordan and his charges emerged safe and with no injuries.

On his way to make contact with another shelter, he observed the devastation left by Hurricane Louis.

He recalled that the entire road was blocked with poles, galvanize, garbage bins, pieces of wood, half a boat, branches and whatever else Louis put there – nothing was untouched. Public buildings were damaged and flooded, with records destroyed. Forty-foot containers were scattered across a field, vehicles extensively damaged. Large cargo and fishing vessels had washed ashore and the list of destruction went on and on.

The British sent marines to help police the island, but according to Jordan, there wasn’t much trouble with looting or serious crime.

“Everyone was still in shock to see the devastation Louis caused and already we felt fatigued from thinking about cleaning up the mess!”

As he remembered, it took six to eight weeks to restore electricity throughout the island again and much longer to clean up all the debris.

And while he understands the curiosity some may have to see the power of Mother Nature up close, Jordan is no hurry to live through another natural disaster.

He concluded, “Hurricane Louis was no joke. I was curious about the experience before, but I don't want to live that reality ever again.”

It’s not only hurricanes that can cause great destruction, as the Caribbean region learnt last August with Tropical Storm Erika.

It caused havoc in parts of Dominica after heavy rains caused rivers to burst their banks. Buildings collapsed and homes, bridges and other property and infrastructure were swept away or buried by mudslides.

A week after the storm hit Dominica, 11 deaths were confirmed out of the 20 feared dead, while another 35 persons had been reported missing. In addition, 574 persons were reported homeless, over 600 evacuated and 267 in shelters. Preliminary estimates had placed the total damage at US$370 million.

So deadly and devastating was Erika, especially to the island of Dominica, that the name was retired by the World Meteorological Organization.

Meanwhile, Tropical Storm Matthew claimed the life of a 14-year-old in St. Vincent on Wednesday night. The day after passing Barbados and the Eastern Caribbean, Matthew was upgraded to a hurricane.