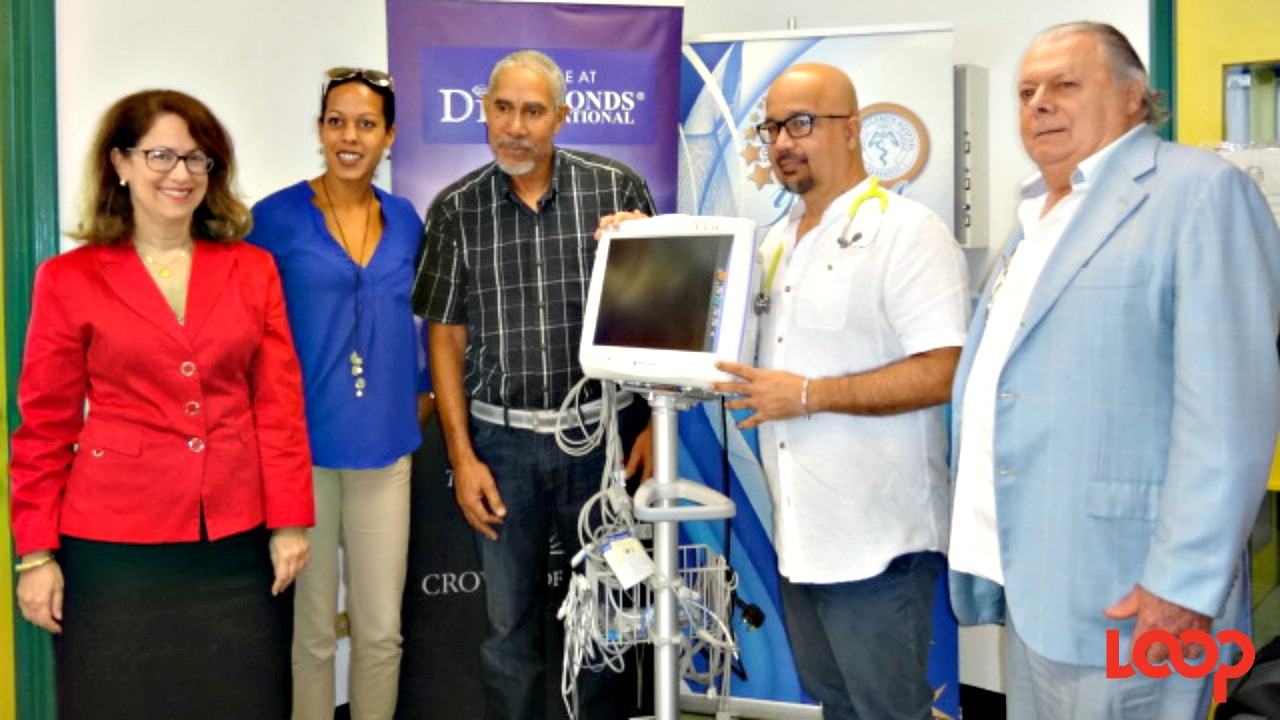 Dr. Clyde Cave, Consultant Department of Paediatrics (second right) accepts the new monitor on behalf of the QEH. He joined members of the Broadway to Barbados Charitable Trust, including Executive Trustee Robert Bourque (right) and Lisa Cole of Scotiabank (left).

Efforts to transform the quality of care being offered by the Newborn Intensive Care Unit (NICU) at the Queen Elizabeth Hospital (QEH) have been bolstered with a donation of a Nihon Kohden Monitor.

The monitor was jointly funded by The Broadway to Barbados Charitable Trust and donor-designated contributions from Scotiabank and in the name of Dr. St. John.

The equipment, which costs close to BBD$40,000, will be used for children requiring the most intensive care in the unit.

According to Dr. Clyde Cave, Consultant Department of Paediatrics at the QEH, within the NICU there are plans to have five Level 3 beds, which have the highest level of support, including ventilation and monitoring of brain, heart, lungs and oxygen among others.

Before handing over the monitor, Robert Bourque, Executive Trustee of the Broadway to Barbados Charitable Trust, said the charity was happy to continue to be able to say yes to the QEH in any way it can and will continue to do so.

“Over the last five years, the Broadway to Barbados Charitable Trust has raised nearly $2.7 million and closing in on $3 million. From my understanding we would be the largest single donor to the Queen Elizabeth Hospital, not just by way of one contribution but by way of the various contributions that have arisen through the effort of all of our partners,” he disclosed.

He said the $2.7 million has helped to purchase vital medical equipment, improve patient care services and upgrade facilities at the hospital.

Dr. Cave explained that the NICU, which has been in operation for close to 20 years, is vital for newborn babies who are in need of that extra care because of a number of medical issues.

Noting that intensive care, especially for children, is an expensive proposition, he outlined, “We depend on large donors, corporate Barbados and individuals who help us out in the things that we do. It is an intensive care unit which means it is highly specialised and with the development of nematology worldwide there is a call for more intensive monitoring and more intensive care which involves equipment and personnel, both of which we are constantly trying to develop."

Dr Cave noted that while there were five children in the unit up to Monday, June 19, three joined the unit overnight. These children, he added, needsall the care they can get.

$20,000 in neurosurgical equipment for QEH through Rotary Club West

QEH receives US$200,000 in equipment from China

Over $20,000 donated to Geriatric Hospital