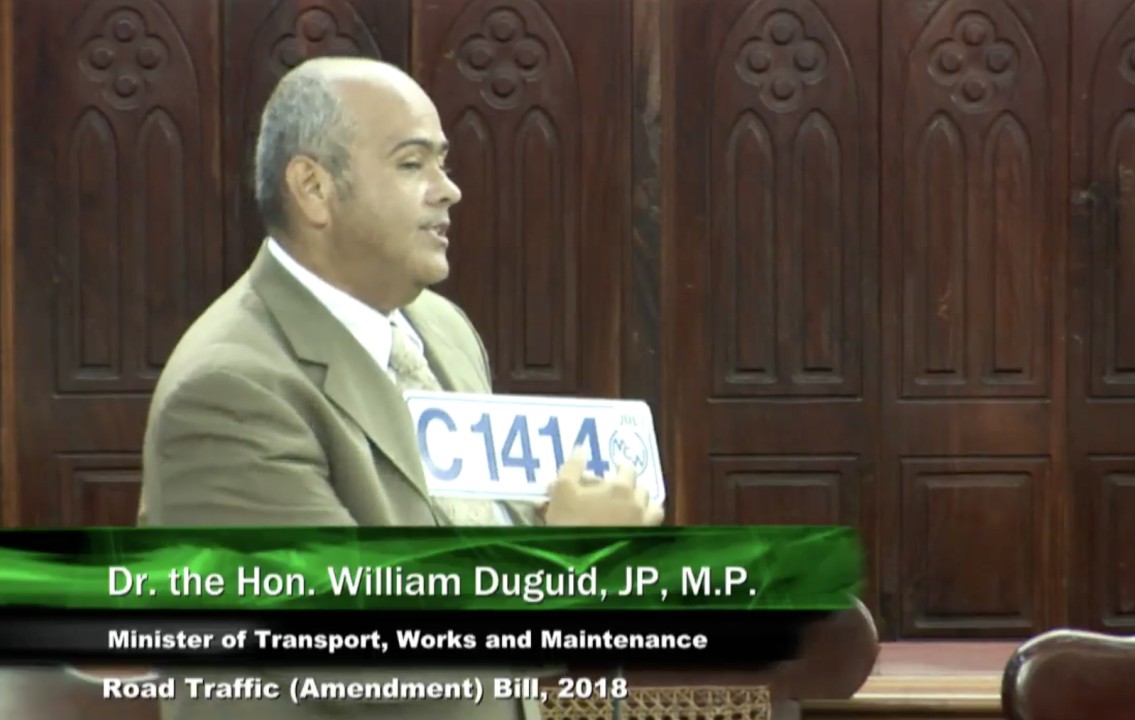 A whopping 38 amendments have been put forward by the Minister of Transport, Works and Maintenance for the Road Traffic Amendment Bill, 2018.

Minister Dr. William Duguid led off the debate today in the House of Assembly where he announced the amended legislation includes changes to the way in which vehicles are classified and licensed for road use.

He said, based on the new policy for commercial vehicles to pay an annual registration fee of 50 per cent of road tax, clearer definitions were needed for this category of vehicle. Therefore, commercial vehicles will now be listed as a vehicle or trailer that is used for hire or reward in a business enterprise and private vehicles are those for personal use.

As such, commercial vehicles will now be required to carry license plates denoted by the letter ‘C’ with blue numerals on a white background. Private vehicles license plates will remain the same.

Minister Duguid also spoke to stiffer penalties for road users who are non-compliant with insurance.

He noted that with the removal of the Road Tax requirement, some insurance companies expressed concern about persons trying to avoid insuring their vehicles.

As such, Dr. Duguid said the penalty for failing to secure third-party insurance will be increased from $1,000 to $5,000.

Government will also be seeking to change the old system of displaying insurance tags and introduce a new system where insurance stickers are displayed in the top right-hand corner of license plates.

The insurance sticker will bear the year and month of the insurance and the Minister gave the assurance that stickers are tamper-proof and will bear the word ‘VOID’ if a person attempts to remove it to transfer it to another vehicle.

He spoke to a new amendment for visitors who wished to travel to Barbados and use their vehicles here. These persons, travelling for six months or less, can register the vehicle with the Ministry and be granted temporary road use. He stressed this arrangement will only be granted for countries which allow Barbadians to do the same when travelling overseas.

The Minister also revealed that the revenues earned from the measures under the new Road Traffic Act will “put our country back on sound footing” and allow the Ministry to operate more smoothly.

Courtesy has alternatives to help skip the fuel tax