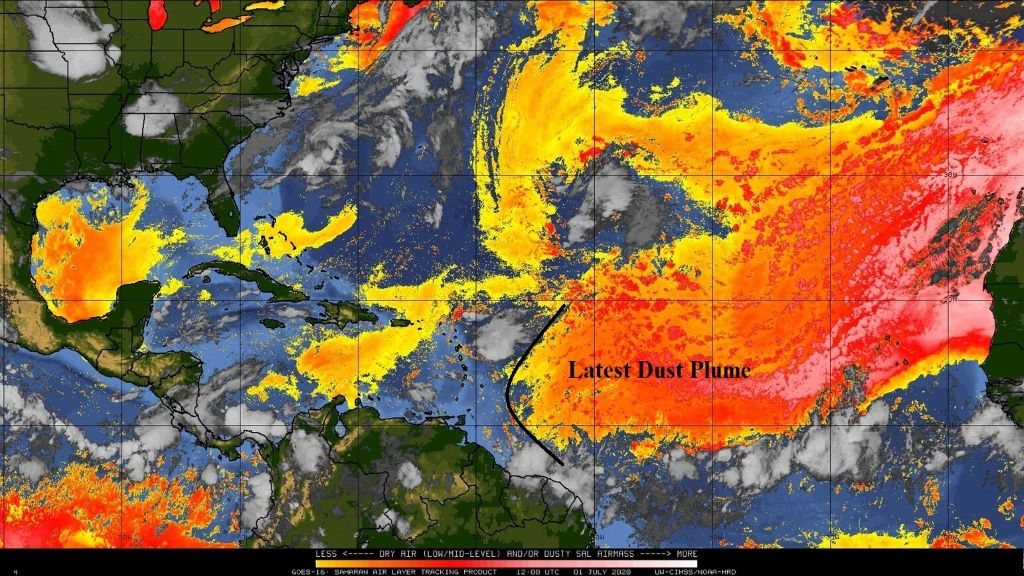 A new Saharan dust haze alert has not been issued for Barbados, but one is in effect for neighbouring Trinidad and Tobago.

In spite of rains across Trinidad and Tobago associated with the passage of a tropical wave, asthma and allergy sufferers should prepare themselves as another Saharan dust plume is making its way across the Caribbean.

The T&T Meteorological Service (Met Office) in an update today Wednesday (July 1) advised that the moisture associated with the passage of the tropical wave has kept the Saharan dust at bay, but a new plume is expected to affect T&T by this afternoon.

While it’s expected to be less intense in comparison to recent Saharan dust episodes the Met Office said current data indicates it won’t be too subdued.

The Met Office said the latest data analysis suggests that this new dust plume will remain in the atmosphere in significant amounts for at least the next four or five days.

Those with respiratory ailments are advised to take the necessary precautions.

Protective measures include: covering the nose and mouth when outdoors; protecting eyes using sunglasses when outdoors; and keeping inhalers and allergy medication on hand.

Saharan dust is a mixture of sand and dust from the Sahara, the vast desert area that covers most of North Africa.

Citizens can monitor the air quality, in real-time, here: http://ei.weblakes.com/RTTPublic/DshBrdAQI

Saharan Dust and haze predicted to increase across Barbados