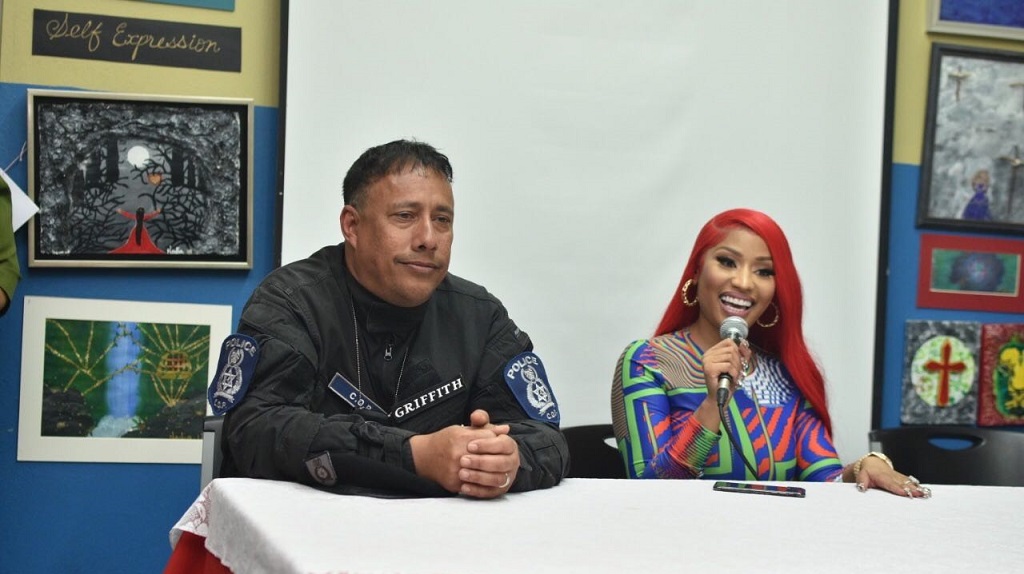 A far-fetched dream became a reality for wards of the St Jude's Home for Girls in Belmont, Trinidad, after they received a surprise visit from the international award-winning rapper, Trinidad-born Nicki Minaj.

The 'Monster' songstress was born in Trinidad and Tobago and raised at Bournes Road, St James, before she and her family migrated to the United States when she was still a child.

Sitting alongside Trinidad's Police Commissioner Gary Griffith, Minaj gave a heart-warming speech to the girls, opening up about previously living in a home due to domestic violence. She urged the youngsters to dream big and have faith that things can get better.

“I don’t know what is going on in your life but I know that it feels so difficult when you’re going through it but you will get through it, you will get out of it."

She also disclosed that she got pregnant as a teenager and kept it secret from her mother as she felt ashamed. Minaj went on to admit that while it was a difficult moment in her life, she still persevered and pleaded with the residents to believe that there is light at the end of the tunnel.

“I want you guys to be encouraged, I want you guys to know that God didn’t promise us a problem-free life; we ain’t never gonna have that. You’re never gonna experience life and feel like you know what, everything is good all the time. But there has to be something inside of you even right now, today, that decides you’re gonna win no matter what; no matter what comes at you, no matter what was already said about you, no matter if you don’t have your parents, no matter if you don’t have family. You have to know and decide today, right now, that you are gonna be one of the ones in this room that wins.”

The highlight of this Thursday's event was Nicki Minaj hosting a mini-concert for the beaming youngsters at the St Jude's Home for Girls.

Seeming genuinely interested, she opened up the floor to allow three of them to sing.

The first performer was Shantelle who was cheered by her classmates. Overwhelmed, she broke down in tears. Eventually, receiving support from one of the girls who stood beside her, Shantelle turned her back to the audience, faced the wall and sang Halo by Beyonce.

The second resident sang Minaj’s Pills N Potions from her album, The Pinkprint.

Last but not least was a girl who intended to rap but felt nervous and opted to do a spoken-word piece. The powerful poem spoke about equating love with sex at the tender age of 13. The rendition utilised popular local songs which had the other girls singing along. Minaj seemed genuinely impressed.

After the mini-concert, she praised the girls for not being judgemental

“It’s very important that as young women, we don’t point the figure at each other. We all make mistakes, nobody’s perfect. When you can acknowledge that you made a mistake and you know that it was wrong, you learn from it and you keep it moving. We’re not living in the past. Anybody talking about your past is just jealous of your future.”

The conversation couldn't end before she spoke to them about "boys" like a true Trinidadian would.

“Anybody that really loves you is willing to wait. Anybody that’s forcing you or pressuring you into anything does not love you.”

At the end of the intimate talks, Minaj pledged USD $25,000 to assist the girls.

She also expressed that they've given her ideas to fund a building for recreational activities for young people.

Earlier, she'd asked the students what they wanted in their communities.

One girl said a library or homework centre while others spoke about learning how to style hair, do nails and cook.

Clara Lionel Foundation continues to give back