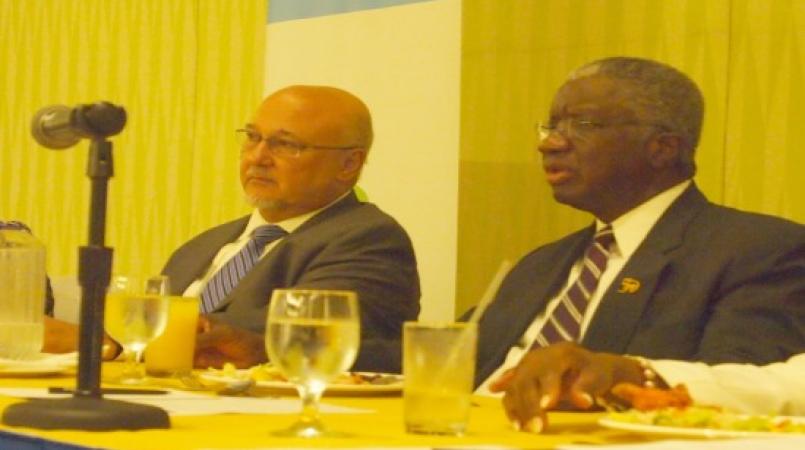 Concerns by those in the business community about the declining foreign reserves and possible dollar devaluation are being put to bed by Prime Minister the Rt. Hon. Freundel Stuart.

His comments were made during the Barbados Chamber of Commerce and Industry (BCCI) monthly luncheon, which was well attended by members of the public and private sector as well as senior government officials.

The 2016 economic review released by the Governor of the Central Bank (CBB) revealed Barbados’ foreign exchange reserves stood at $681 000 000 at the end of December which equated to 10.3 weeks of imports, two weeks below the accepted standard.

In his presentation, Stuart told the gathering fluctuations in the economy are expected as Barbados is heavily dependent on other international economies for trade and imports.

He said the low level of reserves is no reason to believe that the country’s dollar will be devalued.

“So it cannot be that every time there is an adverse movement in our foreign exchange or foreign reserves situation, whatever the reason, the only solution to put forward is that we should devalue the currency of Barbados.”

He went on to say there is little evidence in the CARICOM space to confirm that dollar devaluation produces ‘any spectacular results’ or achieves the desired outcome.

Stuart also said the fluctuations in the earnings of foreign exchange are ‘part of the economic reality of Barbados’, adding the government has developed a ‘well-honed system’ of monitoring and managing foreign exchange and reserves.

“As we go through the months of any year, we can reasonably predict how much foreign exchange we are likely to earn… and down to the floor below which we do not expect to fall. It is expected that we will not always perfectly predict the outcome, but to the extent that the system allows us a degree of control over what happens – and more importantly how to respond to what is happening.”

Out of the CBB 2016 economic review, Governor Dr. Delisle Worrell said there is an expected 250 million dollars of inflows which will be used to bolster the country’s reserves. These inflows are to come from the construction of Sam Lord’s Castle, estimated to be 68 million, the sale of the Barbados National Terminal company Ltd (BTNCL), an estimated 100 million and 40 million from the sales of the Four Seasons property.

Sinckler to Opposition: No currency devaluation on DLP watch