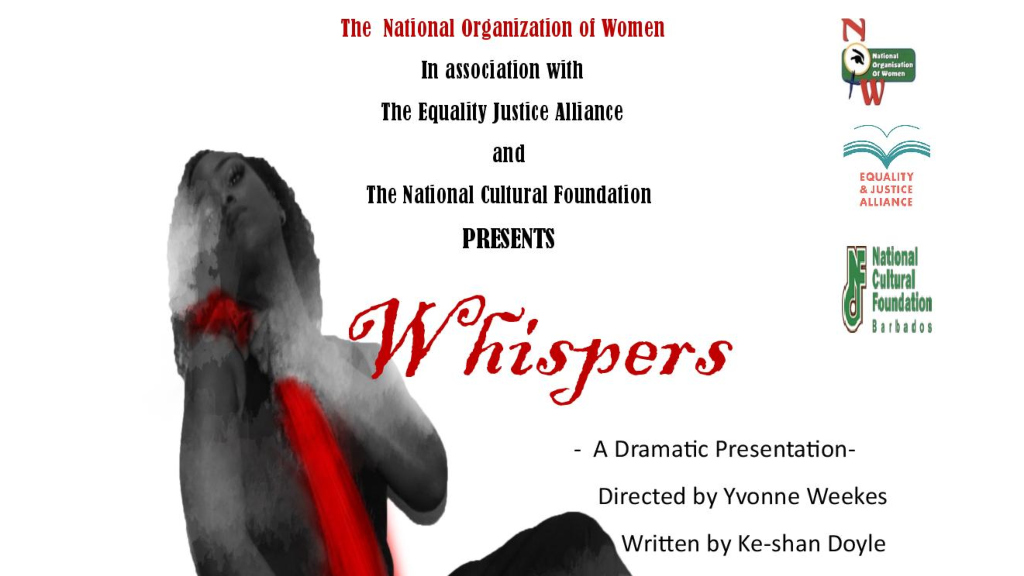 Abortion talks are going to go beyond whispers in Barbados in 2020.

With a brand new year upon us, the National Organization of Women (NOW) has decided to again use the theatre arts as a tool to inspire and educate women in Barbadian society.

"The National Organization of Women, recognizing that theatre in Barbados has always been a space dominated by women and one where difficult conversations were tackled and refined has embarked on an “Activist theatre space”. Activist theatre is an avenue for the National Organization of Women to commission various types of art that match with their work plan agenda intersectionally."

This year NOW will continue to use their Activist Theatre Space with another play in the pipeline entitled "Whispers". Their newest play speaks to the social issues that women, in particular, have to face in the negotiation of abortion services. It being staged in partnership with the Equality Justice Alliance and is not only focused on the issue of abortion but the debates still raging around the issue as well.

"Barbados is one of the territories with the oldest legalized abortion services. As other women in the OECS continue to fight for the right, the reflections on Barbados can throw up important dos and don’ts. Additionally, it provides the space for us as Barbadian activists to continue the fight against the cultural stigma of abortion in the Barbadian space."

"Whispers" is written by final-year student Ke-shan Doyle and directed by Yvonne Weekes and follows the story of a young Christian woman, Adelaide Bishop, a University student who was also a virgin and finds herself faced with an unwanted pregnancy. Taking her on a journey that will eventually lead her to make an informed decision regarding her pregnancy.

And with an incorporation of a question and answer section after the movie, NOW looks to give audiences a chance to hash it out. The organization feels that doing events such as this is the strong way forward.

The organization hopes to hold more plays this year and will look to support those in the arts fully as well.

Last year, the organization took the first step and embarked on using theatre as an educational and empowerment tool in December 2019 partnering with the Caribbean Development Bank (CDB). The play "Scars Beneath The Sun" focused on the topic of Skin Bleaching and was done in recognition of the 16 days of Activism for the Elimination of All Forms of Violence Against Women and Girls.

Frustrated! NOW upping its response to violence against women in 2020

Story time at The Gap Theatre