Obama endorses Biden as the best leader for 'darkest times' 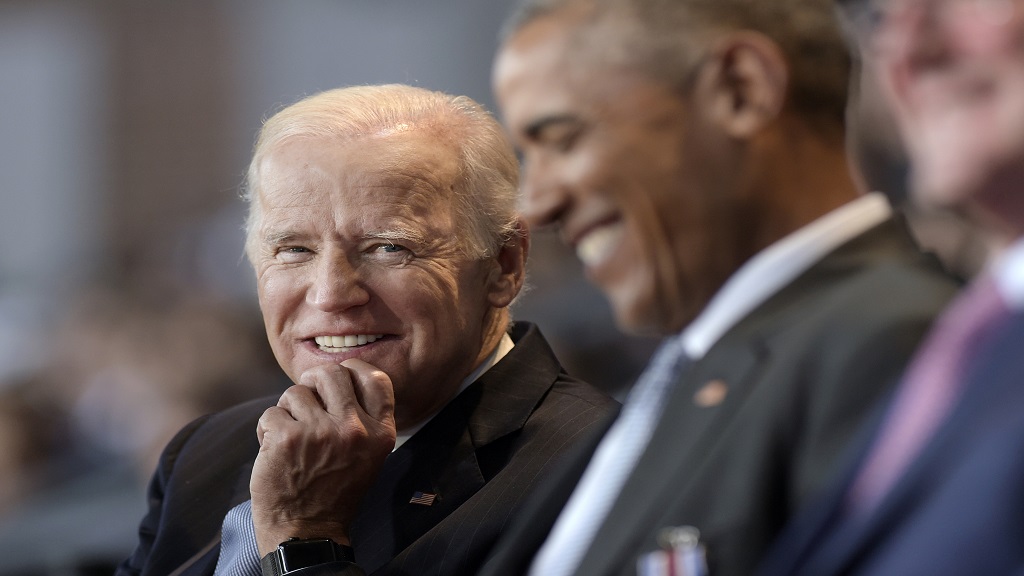 Former US President Barack Obama endorsed Joe Biden on Tuesday, giving the presumptive Democratic presidential nominee a boost from the party’s biggest fundraiser and one of its most popular figures.

“Joe has the character and the experience to guide us through one of our darkest times and heal us through a long recovery," Obama said in a 12-minute video in which he argued the coronavirus pandemic reinforced the need for better leadership.

The endorsement marked Obama’s return to presidential politics more than three years after leaving the White House. He didn't mention his successor, President Donald Trump, by name and instead sought to bridge the ideological divide among Democrats.

Obama commended Bernie Sanders, who was the leading progressive foil to Biden during the Democratic primary. The Vermont senator ended his campaign last week and threw his support behind Biden on Monday.

The former president called Sanders an “American original” and backed his frequent call for “structural change.” But he also said that while Democrats “may not always agree on every detail," they must unify to defeat Republicans.

Biden now has the support of all of his former Democratic primary rivals except for Elizabeth Warren. The Massachusetts senator is expected to formally endorse Biden soon, according to a person familiar with her plans who spoke on condition of anonymity to discuss her thinking.

Two other prominent Democrats who have yet to publicly back Biden are former President Bill Clinton and Hillary Clinton, the party’s 2016 nominee. Hillary Clinton has been in regular touch with Biden, including several times since Sanders dropped out of the race, according to an aide.

Obama avoided intervening in the Democratic primary, but followed the race closely from the sidelines and is eager to take a more active public role. He’s expected to headline fundraisers for Biden and public events in key swing states if such gatherings can still be held given social distancing guidelines during the novel coronavirus pandemic.

After his endorsement was released, Obama sent a fundraising appeal to Biden supporters, asking for donations ranging from $5 to $100.

The endorsement will test whether Obama can transfer his personal popularity to Biden. While the former president is seen favourably by a wide swath of Democratic voters, he was also a deeply polarizing figure during his two terms in office. During his presidency, Democrats lost about 1,000 legislative seats around the country, starting with disastrous 2010 midterms that also cost the party control of the House and many statehouses.

In 2018, he campaigned for some winning Senate and gubernatorial candidates, like Sen Jacky Rosen in Nevada and Governor Tony Evers in Wisconsin. But his influence seemed less powerful in other places such as Florida.

The Trump campaign noted that Obama tacitly discouraged Biden from running for president in 2016 and said the former president is only backing him now because everyone else has dropped out of the primary.

"Now that Biden is the only candidate left in the Democrat field, Obama has no other choice but to support him,” Brad Parscale, Trump's campaign manager, said in a statement.

Though Obama stayed out of the primary, Biden frequently pointed to their time together in the White House. Biden often spoke of the “Obama-Biden” administration when talking about various accomplishments and referred to himself as an “Obama-Biden Democrat.”

But he also insisted he was running as his own man, telling anyone who asked that he urged Obama not to endorse him out of the gate or even in the thick of the primary.

Obama’s tenure became a sort of punching bag for some presidential hopefuls in a primary fight that early on was defined by a debate over the need for generational and systemic change versus a return to normalcy after the Trump era.

Julián Castro pushed Biden repeatedly on whether he argued with Obama privately over deportations overseen by that administration. Pete Buttigieg and Beto O’Rourke jabbed Biden – and by extension, Obama -- by suggesting the party shouldn’t “return to the past.” Sanders and Warren said the 2010 Affordable Care Act hadn’t gone far enough.

But Biden was a staunch defender of that legislation and called it “bizarre” for Democrats, even faintly, to attack Obama’s record.

The conversation around Obama's presidency shifted as the primary wore on. By the time voting began, Buttigieg was almost explicitly comparing his youthful bid to Obama’s 2008 campaign, and the progressives were framing their health care proposals as a way to build on Obama’s legacy. Billionaire candidate Mike Bloomberg, meanwhile, featured Obama in his ubiquitous advertising effort, much to Biden’s chagrin.

For his part, Biden leaned even more heavily into Obama as primary voting began. Aiming at Sanders, the self-described democratic socialist, and Bloomberg, who’d been elected New York City mayor as a Republican, Biden said in a February 21 interview with The Associated Press that “they’re not bad folks. They’re just not Democrats.”

Campaigning before increasingly diverse audiences in Nevada and South Carolina, Biden ramped up his recollections of when Obama tapped him for the ticket in 2008. Biden recalled Inauguration Day 2009, waiting for the train in his hometown of Wilmington, Delaware, “for a black man to pick me up … for the two of us to be sworn in as president and vice president of the United States.”

Often drawing nods and vocal affirmation from his audiences, Biden said he had thought of that day as a national victory over institutional racism. Now, in the Trump era, Biden calls that conclusion a mistake.

“I thought we could defeat hate,” he said, but “it never goes away."

Biden vs Trump: US general election battle is now set

US expert says 'rolling reentry' of US economy possible in May