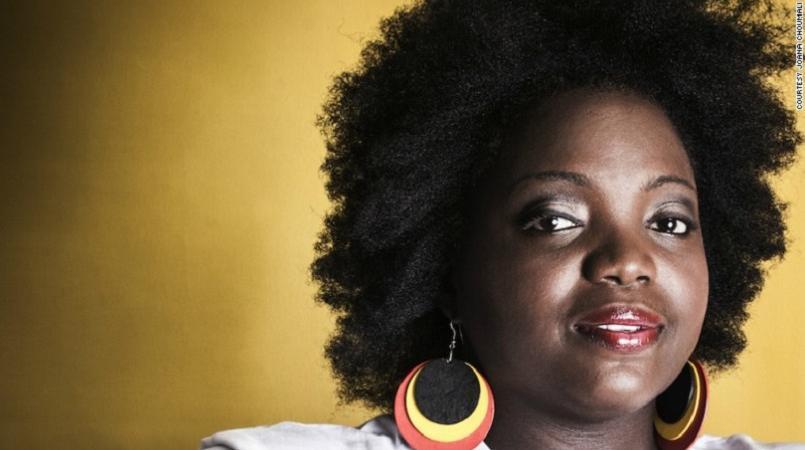 Growing up with afro hair can be a harrowing experience, especially if forced to chemically straighten it.

Her group, based in Ivory Coast's capital Abidjan, encourages and supports African women to wear their hair curly, instead of using popular chemical straighteners known as relaxers.

Diaby got her inspiration from living in Paris: "I was seeing women with big afros and thinking, my hair can be like this," she said.

"One morning I woke up and I said, okay this is enough! It was kind of a vindication."

But upon returning to Ivory Coast, after six months of avoiding relaxers, she found no salon that could cater to her hair. She thus decided to start Nappys de Babi, reclaiming a once derogatory nickname for 'natural' hair and Babi, an informal name for Abidjan. Started in 2011 amongst friends, it soon became a safe zone where participants could exchange stories and tips on how best to care for hair in its natural state, and boasts 17,000 members today.

"We specifically try to help women be proud of their hair," says Diaby.

In an atmosphere where western ideals of beauty prevail, change can be slow.

"Natural hair is more normal than it was before but it is not yet the norm," says Ivory Coast based Paola-Audrey Ndengue, editorial director for Fashizblack, a fashion magazine catering to African francophone readers.

"There are hair salons now dedicated to taking care of natural hair but the big majority is still weaves, wigs and relaxers in terms of market size" she explains.

Within a professional environment, an afro is rarely considered fitting. "Some people may think you didn't comb your hair and its not appropriate for this environment... they don't understand that this is actually your hair," highlights Ndengue.

The use of long weave extensions stitched onto hair has also left a lot of women with irreversible scalp problems, thinks Ayebobo Niang, owner of Naturellement, a salon dedicated to natural hairstyles.

She notes that 30 percent of women who walk into her salon are bald as a result. "When I opened this business I could see it's really common... when they take their wig off," says Niang. "People come here, they probably have hair just in the middle. Or they have lost it all."

Despite this, 'natural' hair fails to raise the eyebrows it once did. "A couple of years ago you were making a political statement, but now, if you wear your hair natural, people are less sensitive about it," Ndengue believes. "A lot of people are doing it now because they feel that it's stylish," she adds.

Within Ivory Coast, and elsewhere, Ndengue notes that multinational brands are starting to take notice. "Some of these brands are starting to bring out specific products catering to natural hair," she says adding a cautionary note: "The numbers they are pulling [compared to relaxer products] there's no comparison yet."

L'Oréal dominates the African market with its Dark & Lovely brand and recent additions such as SOS Hairline - cater to problems caused from weaves.

Yet the US offers an indicator for Africa, whereby relaxer sales have dropped 18.6 per cent between 2013 and 2015, according to research by Mintel.

Popularity for straighteners is dwindling within this market. Last month the Environmental Working Group in the US filed a lawsuit against the Food and Drug Administration for failing to respond to the dangers posed by chemicals in hair straightening treatments such as formaldehyde, a known carcinogen.

Mintel forecasts relaxers will move from the second largest segment of the $2.7 billion black haircare market to be the smallest by 2020.

"Five years ago you couldn't see a billboard with a woman with black skin and natural hair, now it's common," says Diaby.

"We played a big part in changing mentality in Ivory Coast, a big challenge now is to convince [companies] to let women express themselves [in their hair]. You still have some human resources directors who say to women, 'you should just relax your hair'...

12 Things not to say to naturalistas

6 do's for naturalistas to try