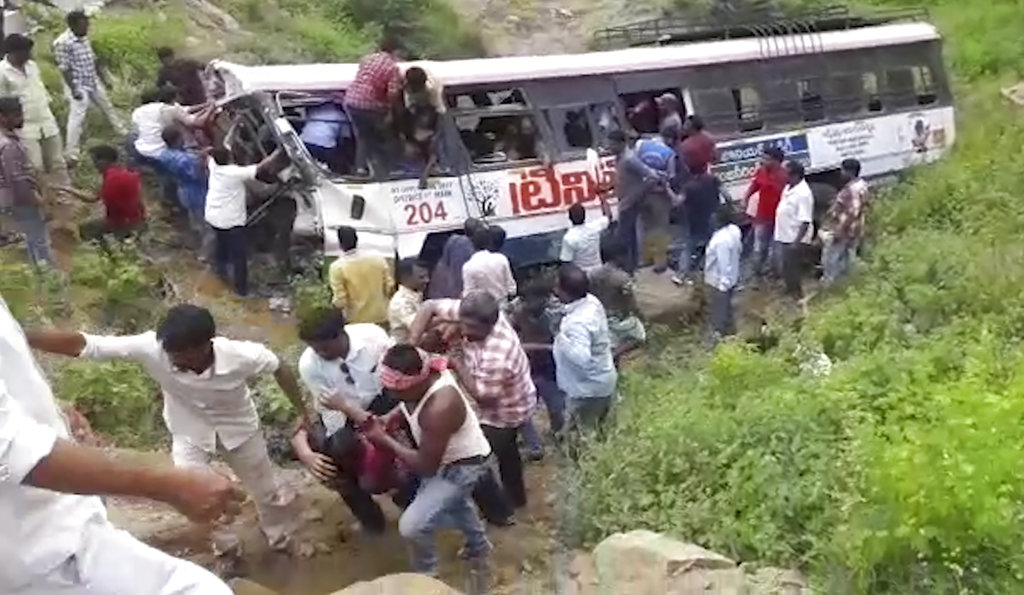 In this grab made from video provided by KK Productions, rescuers pull out passengers from a bus that fell into a gorge in Jagtiyal district of Telangana, India, Tuesday, Sept. 11, 2018. The bus was carrying pilgrims from a Hindu temple in the hills of south India when it plunged off a road killing several people (KK Production via AP)

A bus carrying pilgrims from a Hindu temple in the hills of south India plunged off a road Tuesday, killing at least 45 people, officials said. At least 25 others were injured.

The driver lost control as he tried to avoid another bus on the crowded road leading from the popular Anjaneya Swamy temple in Telangana state, said Narendar, a local official who uses only one name.

Crowds often throng the temple on Tuesdays. The temple is dedicated to the Hindu god Hanuman, and Tuesdays are seen as auspicious for offering prayers to him.

Passersby rushed to help after the bus crashed off the road, mangling the front of the vehicle. Volunteers crawled into the bus through broken windows, carrying the dead and injured through thick grass and up the hill to the road. The injured were taken to area hospitals.

An investigation has been ordered into the cause of the accident, Narendar said.

"Shocked to learn about the bus accident," President Ram Nath Kovind said in a tweet. "Thoughts with the bereaved families and those injured."

More than 100,000 people die every year on India's roads, often because of reckless driving, badly maintained roads and vehicles overcrowded with passengers.

Deadly bus accidents are common. In July, 48 people were killed when a bus crashed into a gorge in Uttarakhand state.