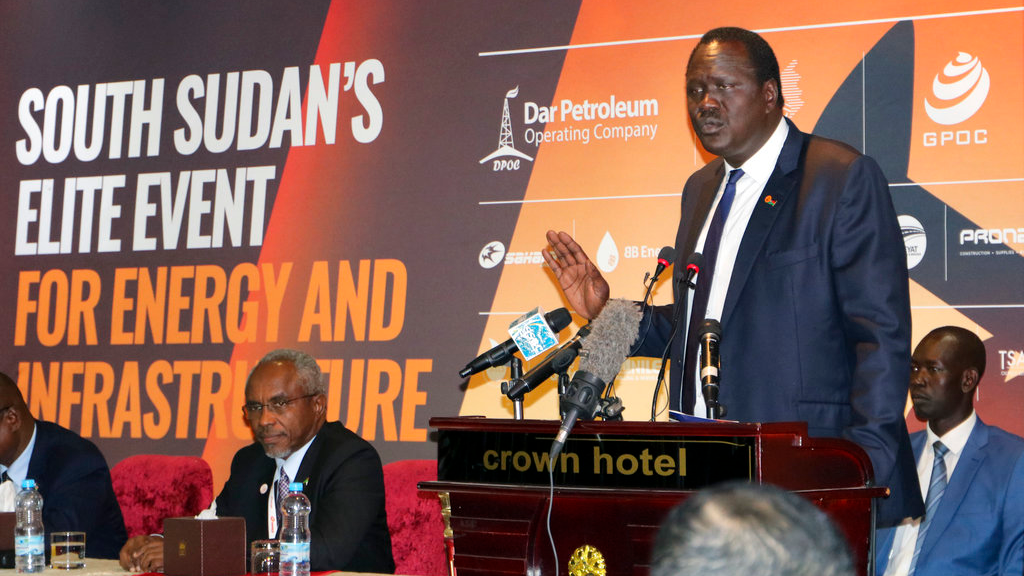 In this photo taken Tuesday, Nov. 20, 2018, South Sudan's Minister of Petroleum Ezekiel Lol Gatkuoth welcomes potential investors during the second Africa Oil and Power conference in the capital Juba, South Sudan. South Sudan is making its first big foreign investment pitch since declaring an end to its civil war, but the oil-rich nation seems to face hesitation from some companies that want to make sure the fragile new peace deal holds. (AP Photo/Sam Mednick)

South Sudan is making its first big foreign investment pitch since declaring an end to civil war, but the oil-rich nation faces hesitation from some companies that want to make sure the fragile new peace deal holds.

The country is eager to make up for $4 billion in lost revenue caused by the five-year conflict after the government and armed opposition signed a power-sharing agreement two months ago.

Tapping 3.5 billion barrels of oil reserves, the third largest in Africa, is the fastest route for South Sudan, whose economy is almost entirely dependent on oil exports.

"Do business or get out," South Sudan's petroleum minister, Ezekiel Lol Gatkuoth, said in an interview with The Associated Press on Wednesday.

More than 400 international and local companies are attending this week's Africa Oil & Power Conference in the capital, Juba, up from the 300 that attended the initial conference last year.

The government is offering prospective investors incentives such as a tax-free grace period of up to 10 years. It hopes to build on the momentum created in August when drilling resumed in key oil fields for the first time since 2013. The aim is to return to the pre-conflict production of 350,000 barrels per day.

Some at the investment conference expressed cautious optimism after preliminary signs of growth.

And early next year local oil marketing company Trinity Energy will begin building East Africa's only oil refinery, a $350 million project that will take about 18 months to complete. It will be able to produce 25,000 barrels per day. Currently South Sudan exports its crude oil, only to buy it back.

"South Sudan is a fantastic blank canvas ... because we see that the demand is here," said Pearl Uzokwe, director of governance and sustainability at the Sahara Group, a Nigerian energy and infrastructure company that recently signed a memorandum of understanding with the government.

However, she said, it's important for South Sudan's government to create an enabling environment.

Past peace deals, as well as power-sharing arrangements between President Salva Kiir and armed opposition leader Riek Machar, have collapsed amid fresh fighting.

One analyst said most of his clients, especially Western ones, are taking a "wait and see" approach even as the mood seems positive.

"They're not willing to commit to anything right now," Shawn Robert Duthie, senior analyst for Africa Risk Consulting, told the AP. Many are worried about their reputational risk, he said. South Sudan's oil sector has faced scrutiny for allegedly using oil revenues to fuel the civil war.

If the new peace deal can last a year without any huge flare-ups and if Kiir and his returning deputy Machar can work together it might help in bringing more people to the table, Duthie said.