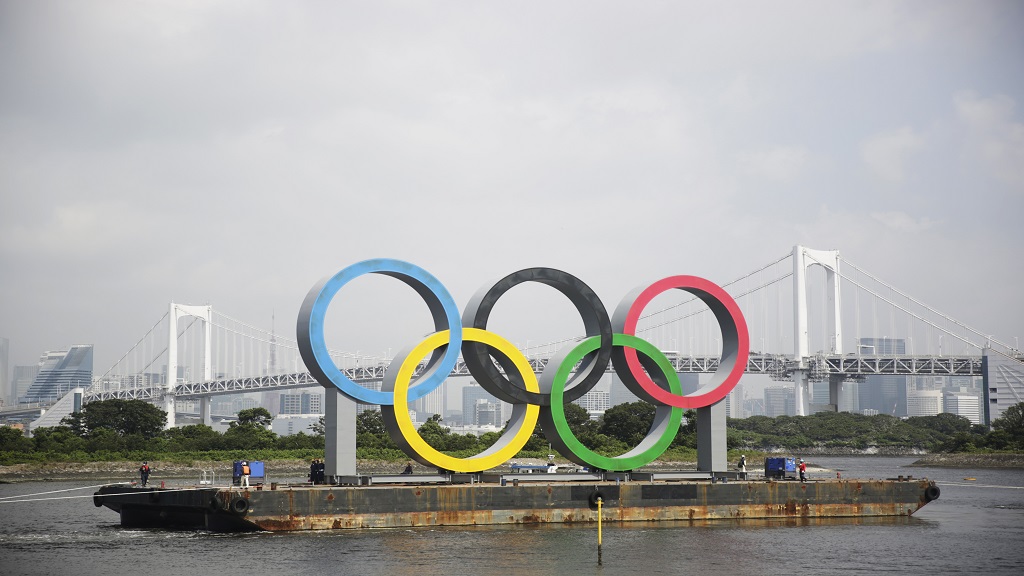 A symbol installed for the Olympic and Paralympic Games Tokyo 2020 on a barge is moved away from its usual spot by tugboats off the Odaiba Marine Park in Tokyo Thursday, Aug. 6, 2020. The five Olympic rings floating on a barge in Tokyo Bay were removed for what is being called “maintenance,” and officials says they will return to greet next year's Games. (AP Photo/Hiro Komae).

The five Olympic rings on a barge in Tokyo Bay were towed away for “maintenance" on Thursday and officials said they will return to greet next year's games.

The Tokyo Olympics were postponed for a year because of the coronavirus pandemic and rescheduled to open on July 23, 2021. The Paralympics follow in August.

“It's not a permanent removal,” Masa Takaya, a spokesman for the Tokyo organisers, said this week. “It's a temporary removal just for maintenance."

Atsushi Yanashimizu, who works on the project for the city government, said the rings will “be reinstalled after four months of maintenance work with the hopes of bringing excitement to the games, and to convey the appeal of the city of Tokyo and the games through this symbol.”

The barge was steered out of its mooring area by small tugboats on a warm, sunny morning.

Organisers are adamant the Olympics will take place next year but have given no specifics on how this can happen during a pandemic.

Few details are expected for months, including the health protocols for 15,400 Olympic and Paralympic athletes, and spectators.

The Japanese media have reported the delay will cost $2 billion to $6 billion plus layoffs at the organisers. No figures have been given by organisers.

The Olympic rings were floated in the bay this year, arriving to symbolise the games that were to have been taking place this week with the original closing ceremony set for Sunday.

The Olympic rings are gigantic, standing 15 metres and almost 33 metres in length (about 50 feet tall and 100 feet in length).

They were set up in Odaiba Marine Park, the made-for-television venue for triathlon and distance swimming with a view across the water of the Tokyo skyline and Rainbow bridge.