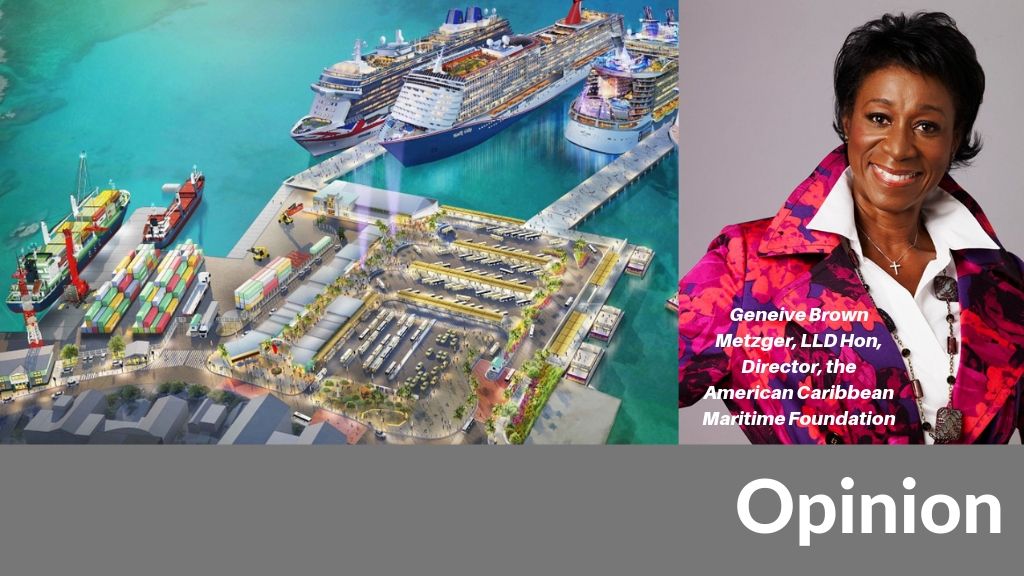 by Geneive Brown-Metzger
Geneive Brown Metzger, LLD is the Honourable Director of the American Caribbean Maritime Foundation and Former Consul General of Jamaica in New York

The Government of the Cayman Islands is endeavoring to bring the island’s tourism offerings into the contemporary world of massive cruise ships with an extensive build-out of its docking facilities.  The project is officially dubbed, Cruise Berthing Facility and Enhanced Cargo Port (CBF).

In the lengthy process of obtaining parliamentary approval  and reviewing competitive bids for the project, however, a serious opposition has emerged, largely based on environmental grounds.  And, opposition leaders have launched a grass roots campaign to have the entire project submitted to an island-wide referendum.

The proposed expansion of the George Town port facility in the Grand Cayman, which will enable the docking of giant cruise ships of the Onasis Class has all the earmarks of a classic and difficult decision between economic progress and environmental preservation.  Parliament gave the green light to the project in 2015, yet the project is still not underway and may well, as noted, even yet face an island-wide referendum.

The Cayman Islands Government makes the case that the expansion will enhance Cayman’s position in the cruise tourism market, with attendant significant increases in on-shore businesses catering to tourists, and avoid falling behind other competitive Caribbean destinations, which are building out and expanding their facilities.

A major aspect of the expansion issues throughout the Caribbean is the simple fact that cruise ships are getting substantially larger.  The Onasis class cruise ship is immense by any measure.  Its overall dimensions are 1,187 feet long, 208 feet wide (beam), and a draft of 30 feet.  The ship has just over 2,700 staterooms, arrayed in 16 passenger decks, capable of accommodating 5,400 double occupancy passengers.  Clearly, Cayman’s current docking facilities, which require ferrying passengers from ship to shore, are quite inadequate to handle the passenger disembarkment/embarkment of an Onasis class cruise ship.  On the other hand, to fully implement the expansion, dredging of the coastal seabed, including environmentally-fragile coral reefs, will have to be undertaken.

Environmentalists contend that the natural beauty of the coral reef and the amazing panoply of sea life supported by it will be irreparably  destroyed.  In a statement, featured on CNN, marine scientist, Dr. Ellen Prager, with colleagues, Dr. Steven Miller and Dr. Carl Shana, state, “What we see as a coral reef is the cumulative result of a special location, specific ocean conditions and the incalculable interactions of a diverse living community of organisms.  It is simply impossible to relocate a reef as proponents of the pier development plan suggest or imply.”  These experts  also point to the fact that the coral transplantation attempted at Falmouth, Jamaica, in that country’s port expansion, was largely unsuccessful.

The stakes are high, the irreplaceable beauty of the island’s coral reefs, as opposed to what the government described in its August 9 RFP for marketing support in its Berthing Facility and Enhanced Cargo Port Education Campaign, as “…the largest infrastructure project proposed by the Cayman Islands Government to date. It is also likely to be the largest single determinant of the future prospects for cruise tourism in this jurisdiction.”

The stark choice between economic progress and the endangerment of one of Cayman’s unique natural resources is clearly a very difficult one.

Travellers flying into the US on Friday ran into long lines