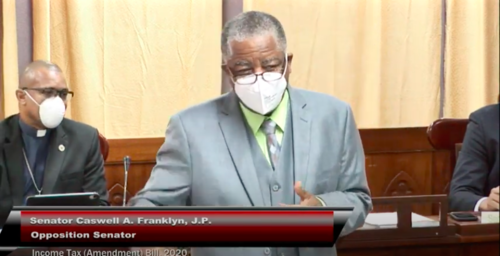 Opposition Senator Caswell Franklyn has given Government a tongue-lashing for their decision to convene Senate in one physical space still.

Describing the action as "reckless", Franklyn did not mince his words during the debate on the Income Tax (Amendment) Bill before he walked out of the sitting.

Related article :Gov't warned against using COVID-19 State of Emergency to cover up

The prominent opinionated trade unionist contended that Government presented legislation that has been on the agenda for months if not years, legislation that could have waited until after the COVID-19 pandemic.

"This government seems not to understand that we are in a crisis, a pandemic of epic proportions never seen before, a pandemic that is so devastating and you bring us here at the risk of my life to debate something that was pending since last year and the next one that we are going to do is a Bill that the last administration should have dealt with. This is three years ago so why are you asking me to come here, trying to make my wife a widow, to come and tidy up something that you could have tidied up years ago or after this crisis is over? You playing the fool!" Franklyn declared.

The Opposition Senator went on to lambaste the Government for promoting and enforcing the message of social distancing but disregarding the message in Parliament and Senate.

"Why are we here? It is not necessary! It is reckless, you have no regard. You tell people to social distance and don’t assemble in crowds." Turning and pointing around the room at his colleagues, he asserted, "This is a crowd! . . . .

"You are being reckless with my life and the life of each of us in here! I do not like it at all Sir and to tell the truth, I said I was going to speak on adjournment, but I’m not staying here this long. I gone,” Franklyn charged before packing his bag to leave.