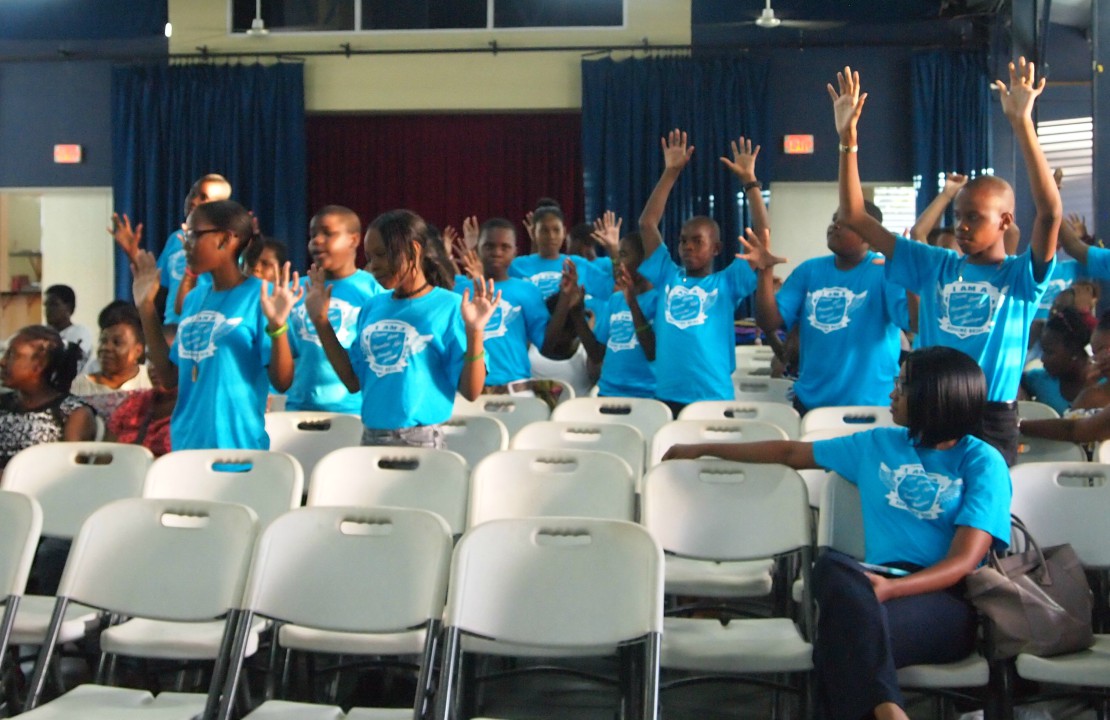 Some of the Supreme Beings taking the oath during the orientation into the Project Rescue program.

Barbadian parents are recognizing the challenges occurring with young ones and are seeking out channels to keep them on the right path.

This is the assessment given by Chief Executive Officer of Supreme Counseling for Personal Development, Shawn Clarke, as he spoke to the media on the sidelines of an orientation session for the newest class of Supreme Beings for 2017.

170 students from various secondary schools have been accepted into the Project Rescue program which runs from first up to fifth form. Clarke said from the program’s inception back in 2009 there has been high demand from parents who require additional assistance with rearing their children.

Clarke said Project Rescue has seen a total of 1012 students pass through the program over the last eight years, adding students are carefully screened through an application and interview process and are selected based challenges such as behavioural problems, low self esteem and those who may have experienced a death in the family and have trouble coping.

He admitted while it was not possible to “save all”, Project Rescue has been achieving great results with a 97 percent success rate.

Clarke also said Supreme Counseling is hoping to partner with government to make the ‘Safe Zone Reported’ smart phone app a national initiative to decrease the instances of bullying occurring in schools. The app allows the user to anonymously report bullying and is available to students of the Frederick Smith Secondary School, Lester Vaughan School, Wesley Hall Infants and Grantley Adams Secondary School.

He said the app along with the Olweus Bullying Prevention Program can provide great assistance in lowering the instances of negative behaviour of students.

“The unfortunate reality is that 75 percent of young people who are bullied don’t report it because they are afraid of further intimidation and then there is this thing about snitching and young people don’t want to be called a snitch. When the program is functioning as it should you not only see a reduction in bullying behaviours but there is also a decrease in other negative behaviours as well.”

During the ceremony, Clarke warned parents not to expect immediate change in their children but rather to work closely and consistently with the school and the facilitators of Supreme Counseling.

Walk and 'back your children' before gangs make them ‘family’

Give back to Supreme Counseling mentorship program