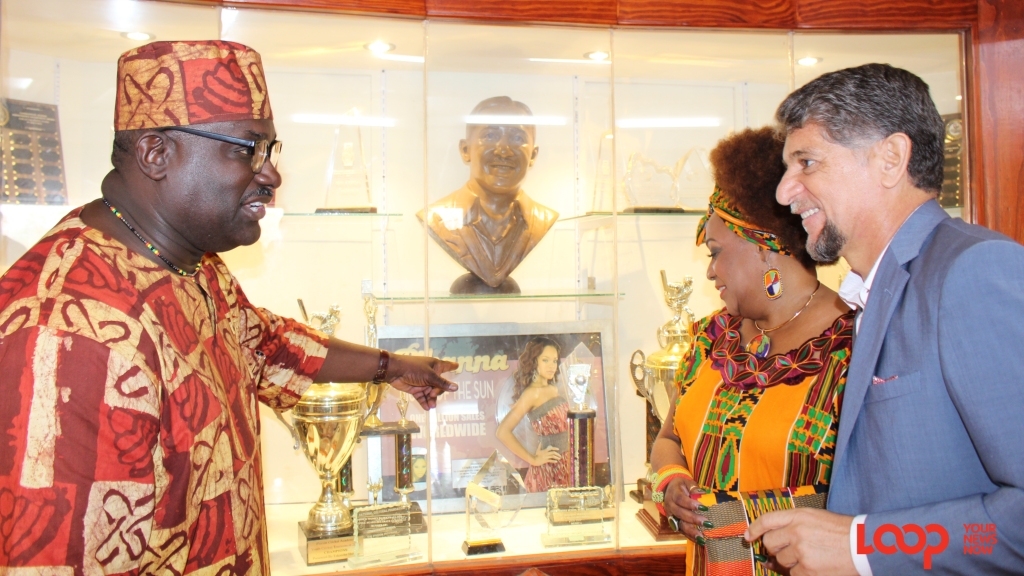 The principal of the Combermere School Vincent Fergusson (left) makes a point about the school’s most popular alumni Robyn Rhianna Fenty, to Ambassador of the Argentine Republic to Barbados, Gustavo Martinez Pandiani and Deputy Chairman of the school’s Board, of management Dr Allyson Leacock, as he took in Culture Day 2019 activities.

The Principal of one of the island’s older secondary schools wants Barbadians, before they jump into parenthood, to give more thought about what they are getting into.

Vincent Fergusson of The Combermere School says raising a child is serious business and he wants parenting education to start from early in schools.

“As a matter of fact, we have to get into the homes.  I have been preaching preconception where before the child is conceived, we have to deal with the parents and encourage them to think seriously about what they are doing.   Rearing a child is a major aspect of life.  It never ends once it starts.  It is not something to be trifled with.

“You must be serious; you must start before conception.  The Ministry of Education must be involved, the social services must get into the schools.  We have got to talk to our young men and women, so they understand this is an extremely mammoth task.  It is too flippant an operation to bring a child and the father and the mother is not there.  They don’t want the child and the child recognises that and becomes deviant.  We see it in the school all the time,” he told LOOP News as the curtain came down on the Waterford St Michael school’s activities to mark African Awareness Month 2019.

Addressing the uptick in violence in the country, especially those involving firearms, Fergusson said the principals and teachers were seeing it in the schools as well.

He noted that it was a touchy situation and [they] were doing the best they could to use the platform available to them to address the situation.

“But what is clear is that we have a contrary generation.  If you tell a fella to go across the road, he is not going to do it.  He is going to go along the road . . . and you will find that almost every direction you give they go contrary.

“As a young man growing up, I often heard my grandparents talk about people who were contrary...they will get themselves in trouble with the law.  They are hell-bent on breaking or circumventing the law.  They either break it or try to get around it and that is dangerous,” Fergusson suggested.

Churches urged to do to help curb gun violence