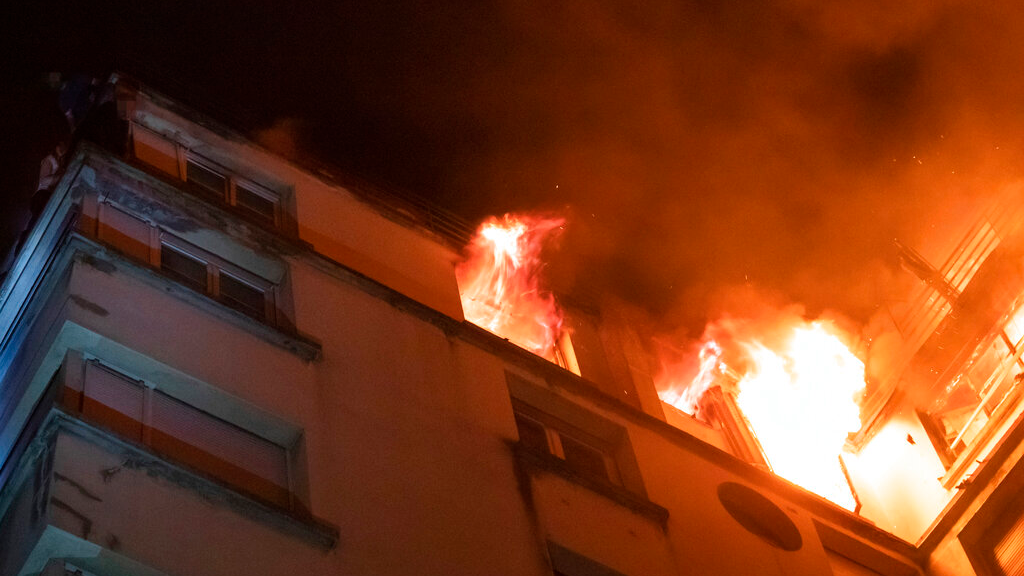 Paris' deadliest fire in over a decade claimed 10 lives Tuesday, sending fleeing residents to the roof as flames engulfed their apartment building before dawn.

A 40-year-old female resident of the building, said to have a history of psychiatric problems, was arrested as police opened an investigation into voluntary arson resulting in death. French officials said she was drunk when she was apprehended on the street near the eight-story building in the quiet neighbourhood.

It is the deadliest fire in Paris since the April 2005 hotel fire near the capital's famed Opera that killed 24 people.

Interior Minister Christophe Castaner was on the scene Tuesday morning, as plumes of smoke speckled the sky.

"I want to salute the huge mobilization of the Paris firefighters," he said. "More than 250 people arrived immediately and, throughout the night, saved over 50 people in truly exceptional conditions."

Firefighters rescued some people from the roof as well as others who had clambered out of windows to escape the flames.

Castaner said the blaze that started on the second floor had been extinguished, and that more than 30 people were being treated for "relatively" light injuries.

"I heard a woman screaming in the street, crying and screaming for help," said witness Jacqueline Ravier, who lives across the street. She saw a young man blackened by smoke and a woman motionless on the ground. She said flames were shooting out for hours from the top of the building and smoke-covered victims were fleeing.

She said shaken residents were brought to her building and the one next door while firefighters continued to fight the flames.

City fire service spokesman Clement Cognon told The Associated Press that firefighters went door-to-door to ensure there are no more victims and to prevent residual fires.

"The situation was already dramatic when the firefighters arrived," Cognon said.

Emergency workers are also seeking to shore up the building that was badly damaged after flames shot out of windows stretching across the upper floors, in images of the operation released by the fire service.

Castaner told reporters at the scene that authorities suspect the blaze was criminal in nature and that the detained female resident had "a history of psychiatric problems."

A judicial official, who spoke on condition of anonymity as an investigation was ongoing, told AP that the suspect was drunk at the moment of her pre-dawn arrest. She is currently in police custody.

The building is on rue Erlanger in the 16th arrondissement, one of the calmest and priciest districts of Paris. It is close to the popular Bois de Boulogne park and about a kilometre (less than a mile) from the Roland Garros stadium that hosts the French Open tennis tournament and near the Parc des Princes stadium that's home to Paris Saint-Germain, the country's top soccer team.

Paris police said the street was blocked off and neighbouring buildings were also evacuated as the firefighters worked to put out the blaze.

French President Emmanuel Macron took to Twitter to express that "France wakes up with emotion after the fire in rue Erlanger in Paris last night."

The fire comes a month after a deadly explosion and blaze linked to a gas leak in a Paris bakery.

In September 2015, there was a fire in a northern Parisian neighbourhood that left eight dead.