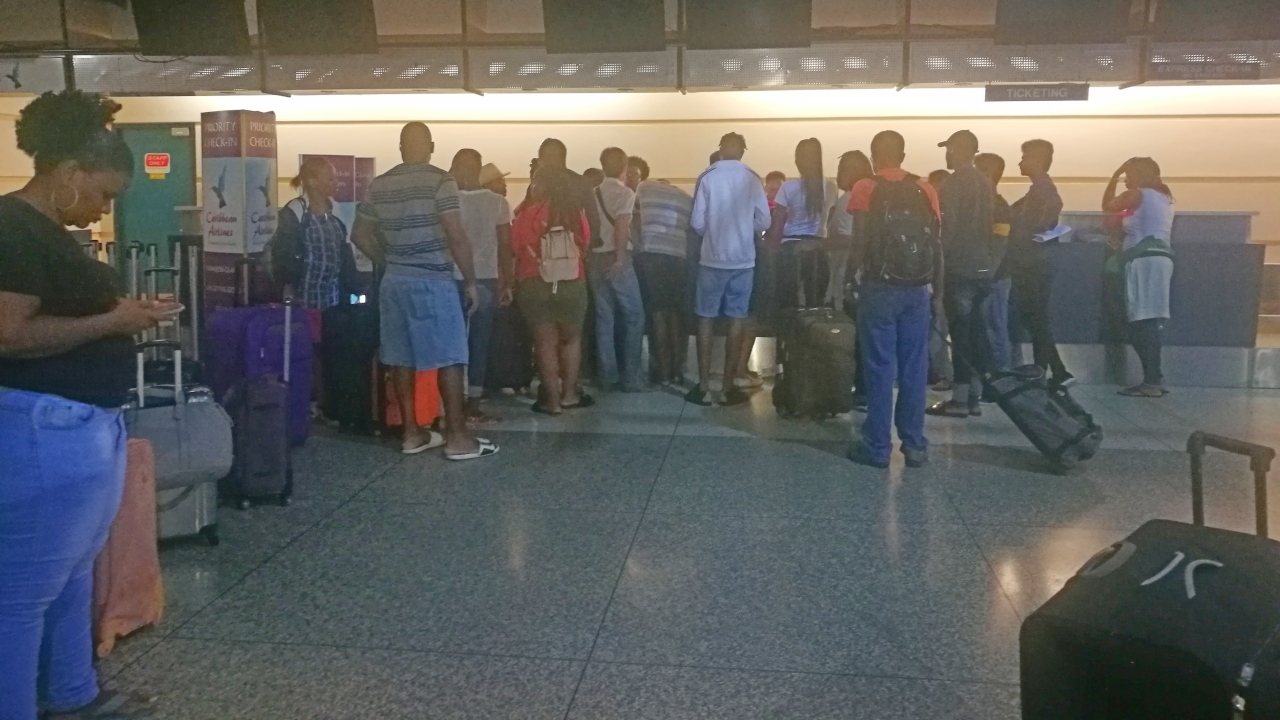 The scene at the Grantley Adams International Airport (GAIA) this morning.

There were angry scenes at Grantley Adams International Airport (GAIA) this morning after Caribbean Airlines cancelled flights without telling customers.

Up to 30 people were queuing from 4 am - when check-in was supposed to open - for the 6 am flight to Kingston, Jamaica - stopping in Trinidad and Antigua.
But they were left standing with no information and no CAL staff to speak to until 4.45 am.

Related article :Transport Board buses running but on alert

Confusion arose because online, there was no notice of any cancellation and passengers had been allowed to check-in online for the flight last night.
Indeed several passengers - including this writer - contacted CAL last night to find out if Tropical Storm Kirk would affect the 6 am flight.
But we were all told that the schedule was running as normal and that we'd be contacted via text message if the situation changed.

No such message was received by any of the angry passengers queuing at the airport this morning, and there were no cancellation updates on the CAL website or on any of the airline's social media platforms.

Calls to the customer service line also went unanswered.
When a CAL staff member finally arrived at the check-in desk at 4.45 am, she was met with anger and frustration at how passengers had been left stranded with absolutely no communication.

One irate man, who had been booked to fly to Trinidad, vented: "This is a complete lack of respect. Why weren't we told, where are the updates online?"
"To be left standing with no information as to what's happening and if we're flying or not is unacceptable."

Another man who was due to be in Jamaica first thing tomorrow morning for a meeting said there was no point him getting rebooked on another flight tomorrow as it would be too late.
And he fears he'll be left severely out of pocket as he booked his return flight to Barbados for Sunday through another airline.

It was not clear at the time of writing if Tropical Storm Kirk would cause further delays and cancellations this afternoon.

Ground staff in Grantley Adams Airport had no information about the CAL cancellations and were unable to ease the frustrations of angry passengers.  Moreover, public relations officer with GAIA, Sylvan Greenidge, could not provide any information on the cancellations:

"Our operations are as normal. The only disruptions we were notified of was from LIAT, which had said from as early as 5 o'clock yesterday that they were cancelling all of their flights - all the other flights have been intact.

"I would have to do some checking to see if subsequent to us being updated by the airlines yesterday if there have been any other changes."

He also noted that "certainly it wouldn't be from our end, it would be from the airlines' end".

Attempts to reach officials at CAL were unsuccessful.