Payne: White Hill will not be abandoned 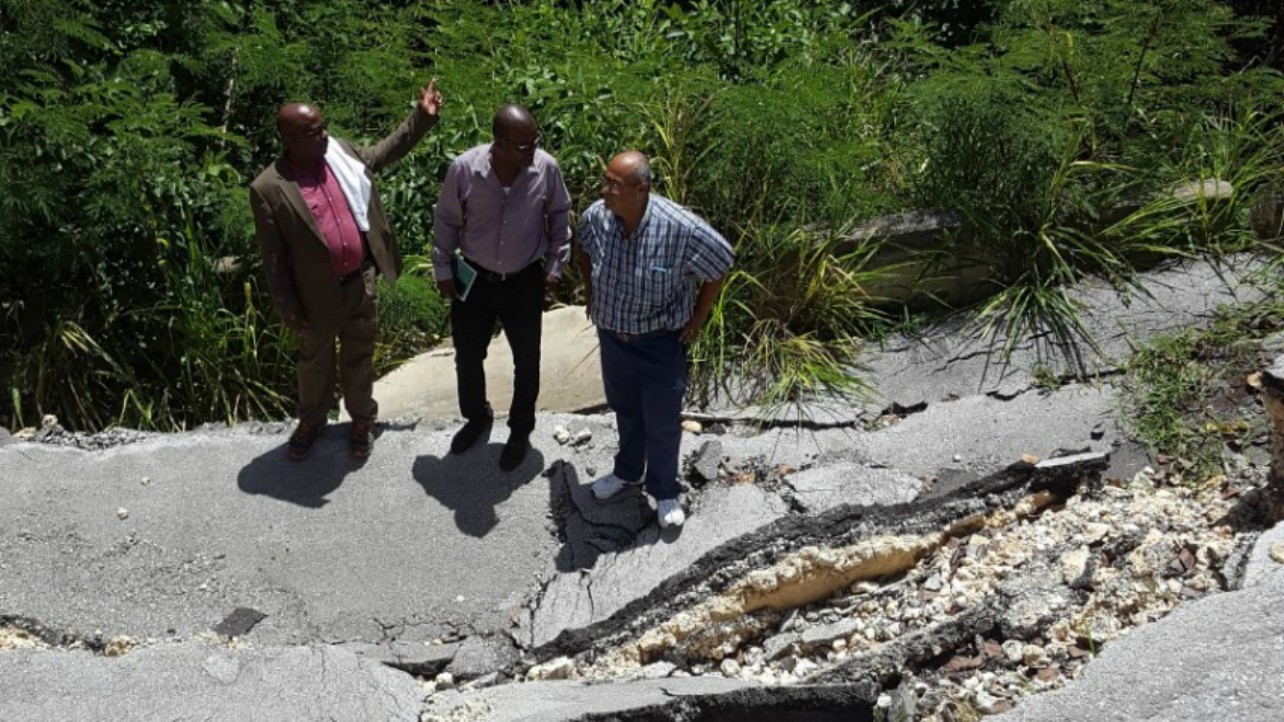 Minister of Housing, Lands and Rural Development, George Payne, today gave the assurance that government would be pressing ahead with remedial measures aimed at stabilising the road infrastructure at White Hill, St Andrew, and restoring normalcy to residents.

He was speaking following a tour of the area and its environs, which have, over the years, been severely impacted by land slippage.

The Minister was accompanied by Minister of Transport, Works and Maintenance, Dr. William Duguid, Minister in that Ministry, Peter Phillips, and other officials.

Payne stressed the issue at White Hill needed to be treated as “a matter of urgency” and welcomed the announcement by Dr. Duguid that a sub-committee would be established to determine suitable remedial options and requisite financing for the proposed undertaking.

The committee, which will be headed by Minister Phillips, is also expected to comprise representatives from the Soil Conservation Unit and the Ministry of Transport, Works and Maintenance.

Responding to a query from the media about the possible relocation of residents, the Housing Minister said officials had identified at least 10 homes that were “very near the road that must be, as a matter urgency, relocated”.

Payne further noted that there were a number of other critical roads in St. Andrew in need of repair, including Coggins Hill, St. Simon’s and Turner’s Hall.

Transport Minister, Dr. Duguid, while stating that White Hill was a priority, stressed that his Ministry was keen on carrying out repairs along the road network in St. Andrew.

“We started out in White Hill, which is an absolutely essential priority that the Ministry would be looking at to try to get rectified; and in fact, there’s a second area where we also saw that the road is about to collapse.

“So, we are going to work on that as a matter of urgency so that the White Hill area does not get stranded between two sections of roads that have collapsed. We also used the opportunity to look at Dark Hole and St. Simon’s,” he disclosed.

Pointing out that they were also working on a solution for St. Simon’s, Dr Duguid revealed that this would be done under the direction of Deputy Chief Technical Officer, Philip Tudor.

“We have a possible solution for St. Simon’s that we should able to get in about three to four weeks, which is called a bailey bridge and that should give a better footing, a better road in that area that has broken away…. There is a lot of work to be done out here in the St. Andrew/Scotland District area,” he stated.

Education Minister going beyond the surface