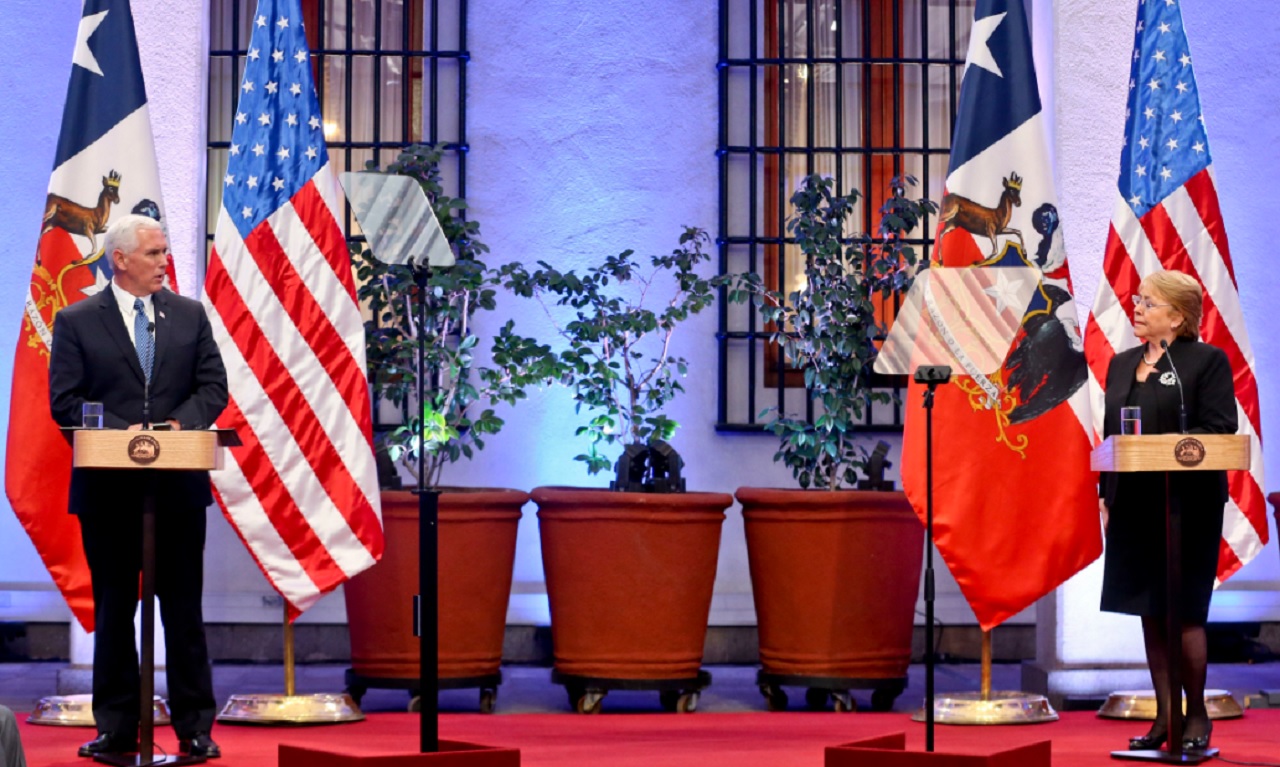 U.S. Vice President Mike Pence, left, and Chile's President Michelle Bachelet, take part in a joint statement at La Moneda government palace, in Santiago, Chile, Wednesday, Aug. 16, 2017. Pence is on a weeklong trip to Latin America that has included stops in Colombia and Argentina. He'll head to Panama on Thursday.

Pence wouldn't say during a press conference in Chile whether he agrees with Trump that there were "fine people" among the white supremacists, KKK members and neo-Nazis who took to the streets of Charlottesville, Virginia, over the weekend, and whether "both sides" were to blame for the deadly violence between white supremacists and counterdemonstrators, as the president claimed.

One woman died when a car plowed into a crowd of people protesting the white nationalist rally.

In a carefully-worded statement, Pence called what happened in Charlottesville "a tragedy" and said, "the president has been clear on this tragedy and so have I."

"I spoke at length about this heartbreaking situation on Sunday night in Colombia and I stand with the president and I stand by those words," he added.

Pence on Sunday called out white supremacists, neo-Nazis and the KKK, saying, "These dangerous fringe groups have no place in American public life and in the American debate, and we condemn them in the strongest possible terms."

During a defiant press conference in New York on Tuesday, Trump acknowledged there were "some very bad people" among those who gathered to protest Saturday, but added, "You also had people that were very fine people, on both sides."

Trump also expressed support for those seeking to maintain a monument to Robert E. Lee. Pence did not answer questions Wednesday about whether he believes such Confederate movements should be removed.

Instead, Pence reflected in personal terms, saying that although he was in Chile, "our hearts are in Charlottesville." The funeral for Heather Heyer, the young woman killed during the protest, was held there Wednesday. Pence said he has been praying for Heyer and her family, adding, "We will not allow the few to divide the many."

The vice president is on a weeklong trip to Latin America to build ties with the region and speak out against the growing crisis in Venezuela.

He spent most of Wednesday in Chile, where he met and had lunch with Chilean President Michelle Bachelet and planned to deliver a speech.

After the meeting, Pence said he will "return from this trip more encouraged than ever that not only will our commerce grow, strengthening jobs and opportunities in America, strengthening prosperity across Latin America."

He also called on Chile to "break all diplomatic and commercial ties" to North Korea, including the export of Chilean wine, and made the same request of Peru, Mexico and Brazil.

North Korea has no diplomatic offices or banking institutions in Chile, but the two countries do have a trade relationship. Chile's government has repeatedly condemned North Korea's missile program.

Pence said "we are beginning to see progress" when it comes to North Korea, but said "much more" must still be done. The Trump administration has been trying to pressure Pyongyang to halt its nuclear and ballistic missile program.

Bachelet did not address the request in her remarks, but did make clear that Chile "will not support" U.S. military intervention in Venezuela, which Trump last week said he would not rule out. Instead, Bachelet said Chile would do all it can "to find a peaceful way out."

Pence also announced Wednesday that he'll be cutting his trip slightly short so he can join the president for a meeting at Camp David to discuss South Asia strategy. Pence had originally been scheduled to return home Friday afternoon. Instead, he'll be leaving Panama late Thursday.

Pence is still scheduled to travel to Panama, where he will meet with the country's president and tour the newly-enlarged Panama Canal before returning to Washington.