The cost of intra-regional travel has become a pain for most CARICOM citizens and a huge talking point considering the financial crisis affecting LIAT airline.

In an effort to put pressure on governments, a petition was started in April by the Caribbean Citizens Against High Intra-Regional Travel Taxes, to force regional leaders to consider alternatives to the current taxes, fees and charges (TFCs) structure.

Noting that numerous studies have highlighted the link between high taxes and a resulting lower demand for travel, the group is of the view governments are in a position to lower the TFCs structure - but are unwilling to do so.

“Clearly, governments are ... hesitant because of the amount of revenue currently generated by these TFCs. We believe that existing revenue does not have to be foregone, but rather collected via different taxes already in place when visitors visit and spend money in the different economies.”

During the Central Bank of Barbados economic review last week, it was revealed that regional arrivals numbers have dropped significantly. Trinidad and Tobago, which is usually Barbados' largest Caribbean source market, registered a 10 percent decline while other CARICOM countries fell off by 4.6 percent.

With over 10,000 signatures already secured, the group has set a target for 20,000 signatures - after which the petition will be forwarded to the CARICOM Secretariat as well as the office of each country’s Prime Minister.

“When the signatures collected reaches a point where we believe that CARICOM Governments are unable to ignore the issue any longer, we will be printing hard copies of the petition including the names and origin countries of the thousands of Caribbean people who are demanding change. This will be accompanied by a compilation of the taxes and fees imposed by each government and a letter making the strong case for dialogue on the issue.” 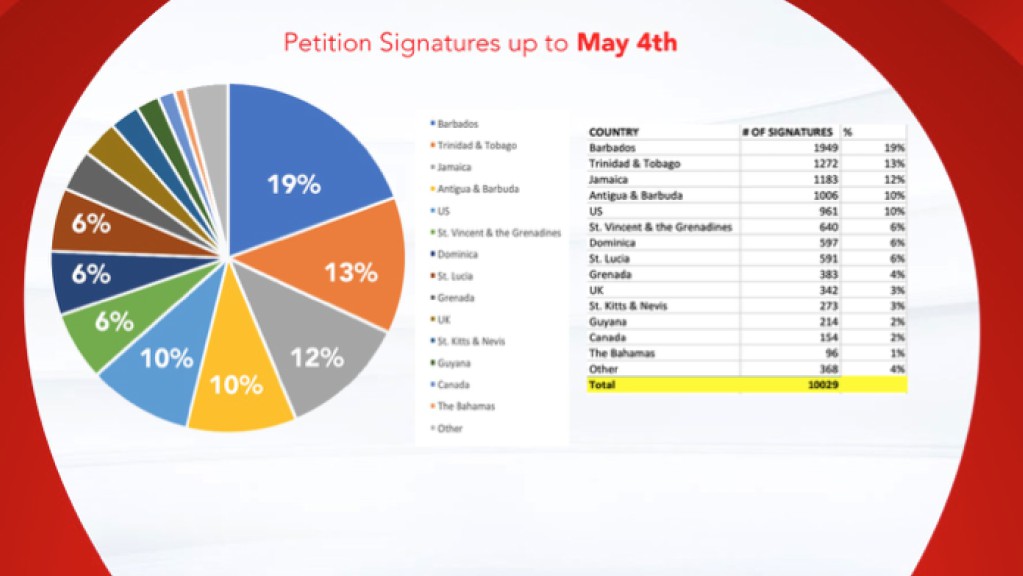 Link to the petition: https://www.change.org/p/caricom-governments-reduction-in-government-taxes-and-fees-on-intra-regional-caribbean-travel

So far, signatures have been pouring in from Caribbean territories as well the US, UK and Canada. Figures show Barbados has been leading the petition and the group noted this was most likely due to the fact that the country has one of the highest TFCs structures in the region.

“Trinidad and Tobago and Jamaica are second and third respectively, as they are among the biggest populations in the region. We assume they are showing an interest in reduced TFCs to facilitate greater movement north and south.

Antigua and Barbuda is the home of LIAT and given the current struggles of the airline, they may be signing in the belief that a reduction in government taxes and fees may improve the performance of the airline.”

The latest development in the LIAT saga has seen Grenada come on board as a shareholder government in hopes of saving the cash-strapped airline.

Region urged to find a solution for LIAT soon

LIAT looking forward to summer after an Easter without cancellations

US issues Level 2 Travel Advisory for T&T after Carnival