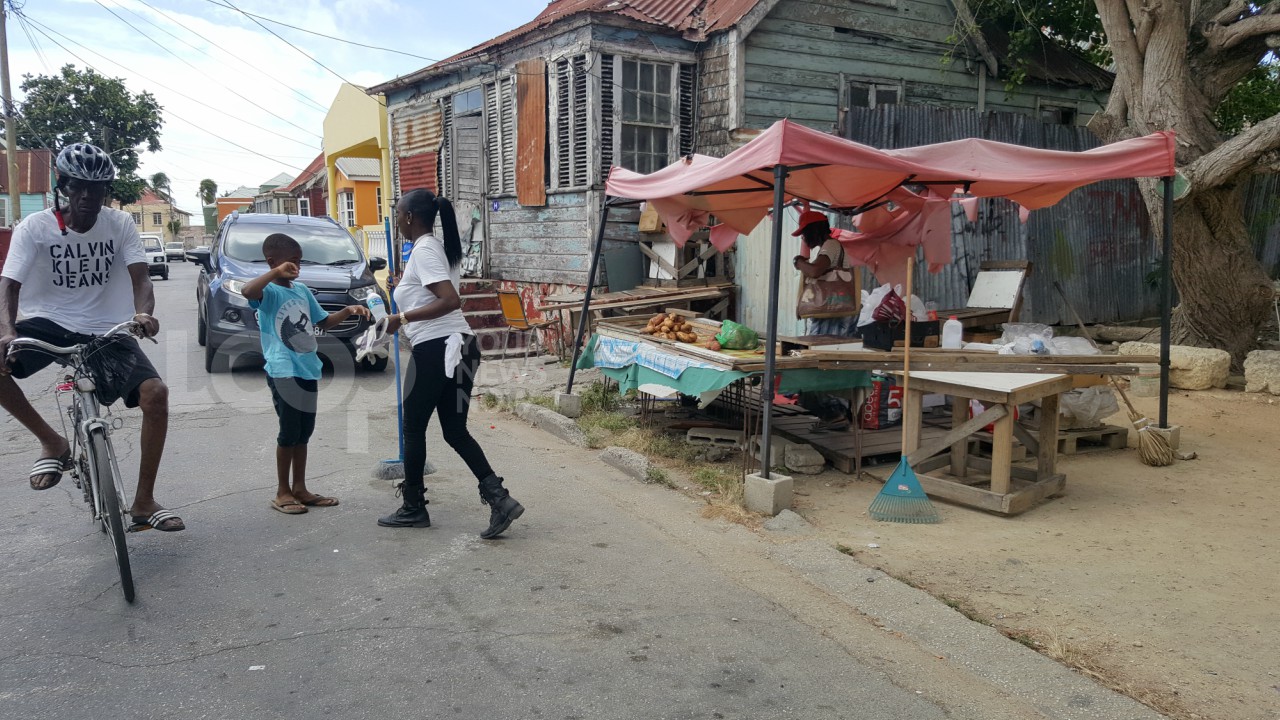 This little boy convinced Natalie Harewood to let him help.

The gloves were on and Natalie 'Natlee' Harewood, along with her team, contracted workers and residents in The City of Bridgetown constituency started to clean up their streets and community.

Harewood removed her mask, and spoke to Loop News as an abandoned jeep located along Oxley Street, was hoisted onto a wrecker truck to be dumped.

Asked what kind of response she’s getting from persons this morning, she said they are saying, “We never see somebody that is a representative for The City do anything like this. I say, ‘How you mean you never see a representative do nothing like this?’ Wuh he supposed to do these things for the people; come to the people and let we clean up and make out here sweet.”

Passing through Oxley Street on his bicycle, Mr. Boyce who has been in and around the town area since 1989 said that he does not lime anywhere else, and he stopped to hug Harewood.

After taking her photo as she raked garbage into a heap, he told Loop News:

“I’m so blessed and impressed with Natalie. You see, it’s not where you were, it’s where you’re going. Natalie has made a bold stance to represent or to come out and help in her community where she raised up and that is so wonderful.”

Harewood was able to make the ‘Clean Up Bridgetown’ campaign a reality today, Saturday, March 24, due to funds donated anonymously. She used the BBD $10000 to pay for the services of Recycle Barbados Ltd to remove and dispose or recycle all garbage in the Nelson Street area. However, residents including young children, came out and lent a hand, grabbing brooms, rakes and shovels to assist. Even her Campaign Manager Charlie Spice was getting dirty to clean up the area. One little boy was following Harewood up and down until she relented and gave him a broom. His smile was big.

Of all the efforts today though, most residents were delighted that the abandoned vehicles were being moved. Two cars were taken to the dump, while Harewood actually got the owner of a third car, which is located at the corner of Beckwith Street and Oxley Street to consent to move or have his car moved.

In addition to the vehicles and metals, Spice said that this morning they moved over a tonne of garbage.

Harewood told Loop News that the people in what she called the “ghetto” deserve better too. “I just want my people to see that I getting things done already.” She said the people are giving her love, “They wish me well and they got my back all the way.”

On Facebook, the story was shaping up just as she said. The Facebook Live video of Harewood cleaning in Oxley Street amassed 60 shares in 30 minutes, and in three hours it has hit 323 shares with over 8000 views and over 400 emotional responses.  Of further note, of the 400-plus responses all are positive likes and loves with six surprise faces and one laugh, but none are negative.

UPDATE: Natalie 'Natlee' Harewood ready to clean up The City