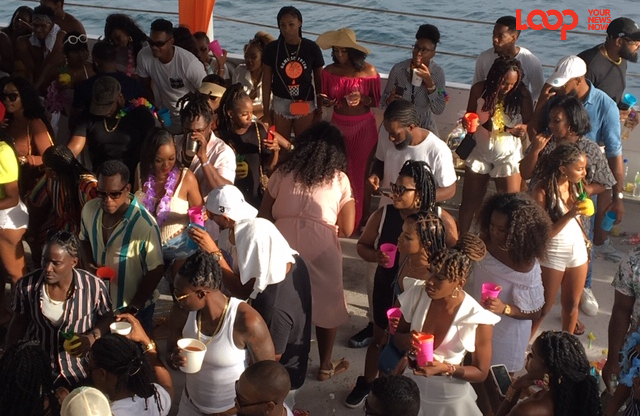 Torrential rains nor choppy waters could stop “bumpas” from rolling or rum from flowing as the fourth edition of the Bumpas and Rum (BRUM) cruise took place last Sunday evening onboard the MV Dream Chaser.

Hundreds braved the inclement weather to be a part of one of the Crop Over Festival's most anticipated events.

With a tropical theme, titled “Aloha Aloha!” represented in their decorative cocktails and the rhymic hip movements of many females on board the ship; it was non-stop vibes.

The island’s number one vessel deejay - Surf Rat was in his typical fine and commanding form as he directed the patrons’ movements and responses; Daddy Bubbles and Evolution, DJ Psalms, DJ Prim and Fullklipp Sounds, all received positive reactions.

The music for the 2019 Crop Over season was heavily rotated to the appreciation of the consistently energized crowd, who was reluctant to leave at the end of the journey.

Promoter of the event Lorenzo Thorpe told Loop he is extremely satisfied with this year’s turnout, so much that he and his team may have a surprise for their supporters before the end of the year.

Initially a November event back in 2016, Thorpe said his team wanted to pay their respects to the Crop Over Festival, hence the birth of BRUM in the summer. “Crop Over is everything to us, it’s our festival. We look forward to the season, where we showcase our talents and skills in various art forms.

Thorpe thanked all of those who supported the 2019 event, especially those who made it an incident-free experience and he had some cool parting words for patrons as they continue to enjoy the sweetest summer festival.

“Be safe, live life, BRUM - get with it”, was his message for the season.