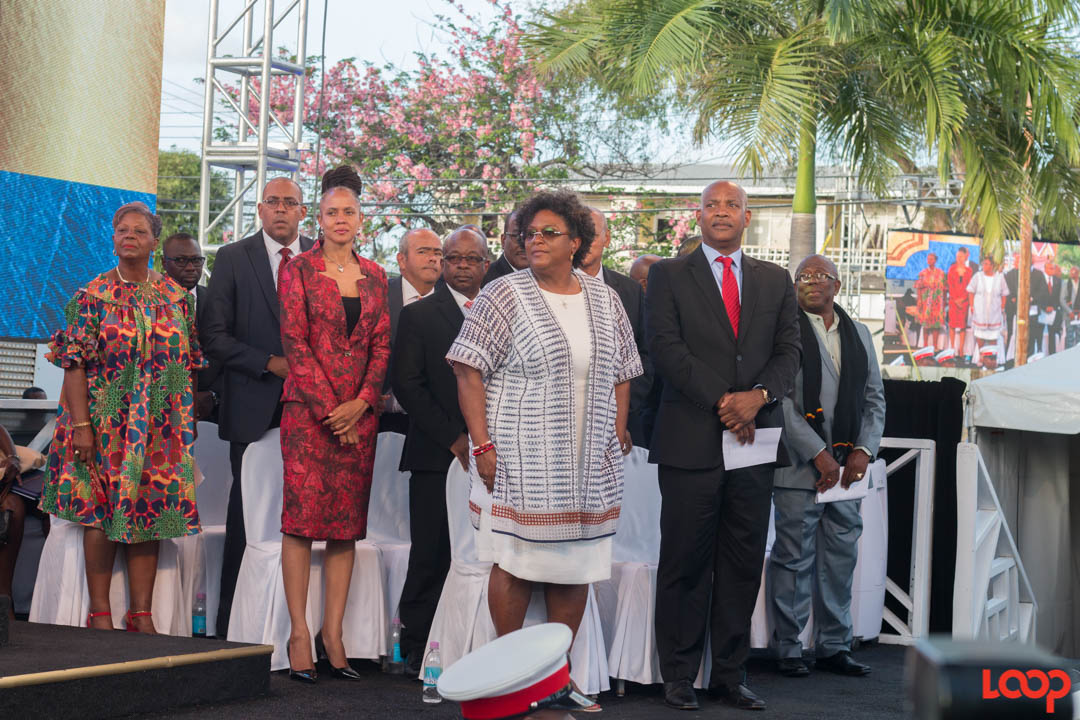 Hundreds of Barbadians from all walks of life joined with Prime Ministers from across the Caribbean, other dignitaries and specially invited guests, who gathered at the Bay Street Esplanade to witness the swearing-in of the new members of Cabinet and Parliamentary Secretaries.

They watched as  Governor General Sandra Mason swore in the Cabinet members one at a time, then were showered with the best of local entertainment, including performances from persons such as Nicholas Branker and Paula Hinds.

Bishop Gerry Seale told the newly sworn-in persons that, "If you have come for a piece of the fatted calf, may I suggest you’re at the wrong table," before Prime Minister Mia Amor Mottley assured Barbadians that she will demand transparency and accountability:

"I do assure the people of Barbados, that their recent generosity towards the candidates of the Barbados Labour Party, will not be misused or abused.

"We've seen that it is sometimes possible, even without commanding the totality of the membership of the House of Assembly for dictatorial and law-breaking tendencies to emerge. I give you this evening, my solemn word, that it will not be so under any Government under my leadership."

Outlining some measures to ensure this she stressed that there will be "an innovative use of the committee system of Parliament to co-op external participation and input, and an enhanced consultative process with an expanded and reenergized social partnership - and through the structure of our proposed People's Assemblies and national dialogues.

"We will also consider the introduction of question time, where Members of Parliament will respond to pertinent queries, not only by Members of Parliament, but those submitted by members of the public... In short, the checks and balances function that is expected of a Parliamentary Opposition can be carried out by you the people of Barbados."

Senior public servants will also be encouraged to engage with the public:

"We will enact fit for purpose freedom of information legislation and will remove the current provisions in the general orders that effectively prohibit senior public servants from engaging with the media - our people must respond to the people of Barbados."

Mottley added that her government will "welcome and encourage the active public scrutiny of our performance - both in the legislative and the executive branches of government:

"And let me turn to the executive branch that has brought us here this evening - the swearing in of a Cabinet... There will be deadlines for action and constant followup and evaluation. And I have made it clear and do so again, that I will be holding the ministers of the Crown of Barbados to the highest standards of efficiency and productivity - the people of Barbados will accept nothing less, neither will I....

"No ministers will be signing important deals or contracts on your behalf behind your back or behind indeed, the back of Cabinet or without the relevant advice or opinion of the relevant public service professionals... We will institutionalize the holding of post Cabinet meetings, to keep the public informed and up-to-date on all major decisions - not only after they have been made, but where possible in the process of consultation in the making of decisions.

Swearing in of the Members of Cabinet and Parliamentary Secretaries

"All Cabinet Ministers and indeed all Members of Parliament will subscribe to a code of ethics, that will guide us in the performance of our duties.

Noting that her government has already started to get down to business, she emphasized their commitment to engaging and reaching agreements in relation to wage negotiations for public servants:

​​​​​​"One of the items of my Cabinet's meeting - and we will have two this week - the first one on Tuesday will be to ask this BLP team 2018 to continue to share in the sacrifices being made by our public servants and other sectors of this society.

"For the last year as a matter of principle, these men and women joined with me, as BLP Parliamentary representatives, and declined to accept the 10 percent pay which the previous government took back by legislation. We took a decision to have our backpay and our continuous 10 percent monthly pay goes to charitable organizations such as the Salvation Armey, the Diabetes Foundation of Barbados and a number of other entities on one simple principle, that we will not accept it until the public servants issues relating to terms and conditions are appropriately resolved in this country.

"Consequently, I shall similarly recommend to my colleagues, a continued commitment that that 10 percent will not be accepted until the public servants of Barbados receive their due."

The Prime Minister reinforced her point that "transparency" will be paramount under her leadership:

"The hallmarks my friends, therefore of this Cabinet, will be accountability, transparency, fairness, discipline and unity. We do not and will not subscribe to the notion of government by stealth.

"As we declared in out Covenant of Hope and I quote, 'you should always have the confidence knowing, how we as a government will take the decisions and how we will act in your name'."

PM Mottley hits the ground with transparency and public swearing-in