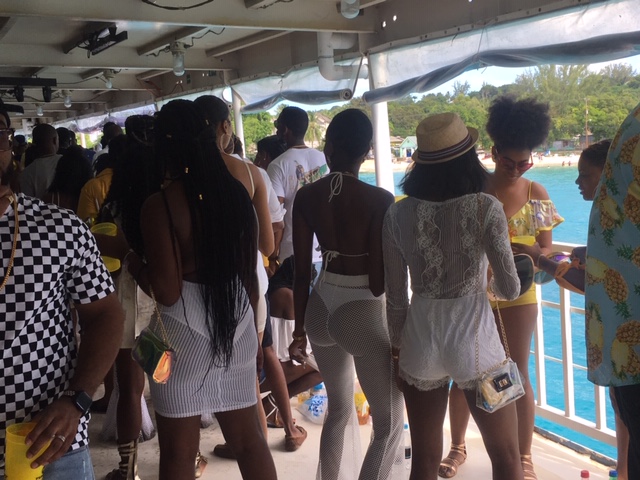 Nature played its part last Sunday morning - the blue skies, clear waters and the golden rays of the sun provided the perfect ambience for the third edition of Turnt Barbados’ Golden Rays cruise.

Despite an uncharacteristic late departure due to another vessel being in the bay of the Shallow Draught, hundreds of patrons including West Indies cricketer, Carlos Brathwaite and tennis sensation, Darian King, still enjoyed the vibes on board the MV Harbour Master which returned “home” for the Independence celebrations.

The management of the Harbour Master presented the perfect gift to the locals and small band of visitors when they reimbursed for the initial lost time, a gesture that was duly appreciated by the crowd’s harmonious singing and non-stop jamming.

From the initial motion of the boat, there were non-stop vibes inspired by deejays DJ German, Jus Jay, Vibe Nation and Jagwa the Champ who kept the crowd moving with the latest soca, reggae and hip-hop tunes. But the greatest reception came during a “vintage” Vybz Kartel and Movado session.

Turnt promoter Dario Burgess said the team was really pleased with the turnout as well as the return of the Harbour Master which has been with Golden Rays from the inception, but missed 2018.

Burgess said the extra space was praised by those on board, especially the ladies who were not dance-shy and managed the heat with their ideal and stylish Turnt fans.

“The ladies had definitely liked the Turnt fans, which is a part of the Turnt merchandise and then Ciroc also gave fans and gold visors, which the ladies definitely were dying for”.

To complement the party vibes and beautiful patrons, there was a culinary fair which featured cuisine from Flavors Catering, Farmers Choice, Lemongrass Express and Wibisco.

As the saying goes, those present “got good value for their buck”.

Burgess expressed gratitude to all of the sponsors and said the Turnt team is already getting prepared for season 2020.