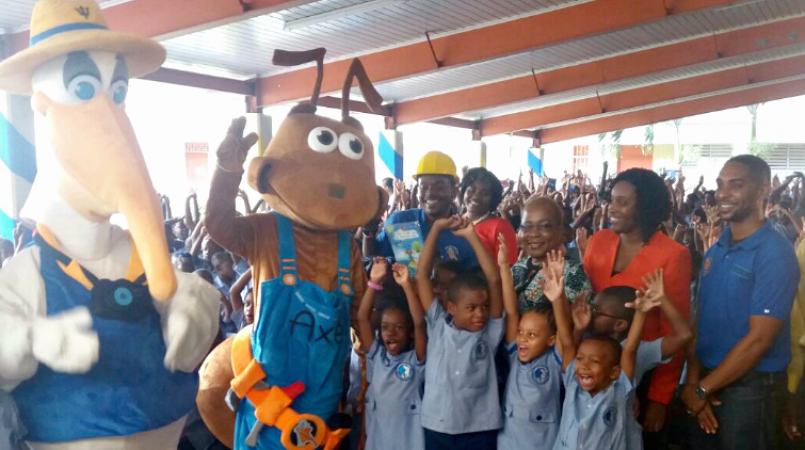 A senior educator is begging for the Father of Independence the Rt. Excellent Errol Barrow and other national heroes to be portrayed in local children’s books.

The Principal of Blackman and Gollop Primary School, Patrona Holder told local author Gregory Skeete, “I offer a suggestion to Mr. Skeete to make Mr. Barrow and all of the other national heroes come alive through his stories which would excite, stimulate and interest our children."

Her wishful words were uttered when the author visited the school recently after Skeete chose to commemorate Errol Barrow Day with the launch of his ‘Pilly Pelican presents 50’ children’s book.

Skeete who was an engineer by profession engineered the launch in a very timely manner and the students and staff of the Blackman and Gollop Primary School were the first out of three lucky schools to cop the first copies of the Pilly the Pelican book series.

Students of the Blackman Gollop primary school were wowed during the school's assembly by a presentation from Skeete and The Pilly Pelican team as they launched the children's book series making the school their first start.

The presentation, which began quietly with a prayer from head boy Khairi Thorpe and head girl Maleigha Roach, soon transformed into a hall of excitement as Skeete and mascots arrived on stage.

The two mascots, which embodied ‘Axel the Ant’ and ‘Milk Making’ which are the names of two of his books, chauffeured Skeete on stage as he taught the students three core principles.

He encouraged them to take with them for the rest of their lives, “Never stop learning. Readers are leaders and follow your dreams”

Holder welcomed Skeete with opened arms and told the students, "Today we are witnessing a presentation from Gregory Skeete, a very young man who has decided that The Blackman and Gollop be the first school to be part of this event."

"Tomorrow Barbados will remember and celebrate the life of Barbados' first Prime Minister and national hero the Rt. Excellent Sir Errol Walton Barrow. Children you might not live to do all the things that Errol Barrow would have done but you can live his experiences through reading.

Immediately following the presentation representatives from McBride Caribbean Limited along with Gregory Skeete, donated 50 books which they are certain will aid in the students’ development as people, leaders, future employees, entrepreneurs and good citizens.

Vaxhall Primary and St. Bartholomew's Primary are the two schools up next for the island tour.