Plans on for annual internships under Ministry of Energy and Water 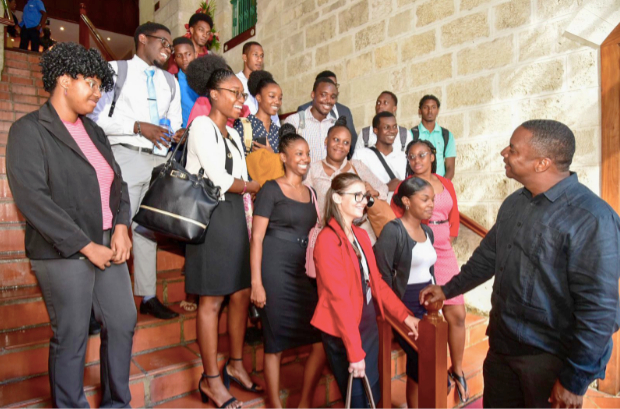 Minister Wilfred Abrahams and the BWA interns when they toured the Parliament Buildings.

The Ministry of Energy and Water Resources (MEWR) will be hosting an annual internship programme, building upon the lessons learnt during its just-completed pilot.

Minister Wilfred Abrahams knows it will take greater planning but says that his Ministry is up to the task having seen the outcome of this year's internship programme.

According to a press release from the Barbados Water Authority (BWA), of the group of students who participated in the Ministry's Summer Internship Programme, 15 were hosted at the Pine-located organisation.

The BWA interns were given an opportunity to observe the operations and garner hands-on experiences as they were
involved in several active projects. The process brought interesting perspectives and a fresher outlook into the departments to which they were assigned and their contributions to the working teams were invaluable.

Abrahams explained that the Ministry planned to host this internship programme annually. He said:

"The positive feedback received from the interns on their experiences and the exposure they have gained have been very encouraging, and my team will commence early next year with a greater specified and established structure.”

While their two-month attachment was focused on gaining job experience and training, the interns also participated in an Effective Communications training seminar. There were taken on a number of tours to several related locations and areas. These included the Solar House in Queen’s Park, the National Petroleum Corporation (NPC); the BWA’s two Sewage Treatment Plants; the Barbados National Terminal Company Limited (BNTCL); sections of the Scotland District including the Shale and Sand Quarries and The Houses of Parliament.