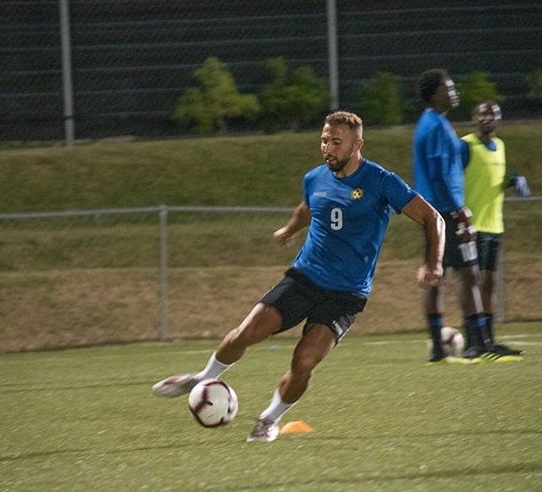 After narrowly missing out on qualification for this year’s Concacaf Gold Cup due to a technicality, the Barbados senior men’s football team is full of optimism and hope ahead of their opening match in the Concacaf Nations League.

The senior Tridents will kick off their League C campaign tonight at the Barbados Football Association (BFA) at 6 pm against Group A opponents St Martin.

A huge part of the positivity in the camp is due to the return of Carlisle United forward Hallam Hope who scored two goals on his international debut last September in Georgetown, Guyana to help the Tridents to a 2-2 draw.

It would be Hope’s first game in front of the Bajan supporters, a special moment for him, specifically because it would be the first time his local family would have the opportunity to see him play live.

Despite being just 25 years old and earning a mere two caps, Hope is considered a senior member of the squad, due to his six-year professional career which has seen him play at clubs such as Everton, Bury and Sheffield Wednesday, experience which he believes the team can benefit from.

“I can bring experience and I can hopefully bring goals and set up some goals as well”, said Hope.

Hope has practiced twice with the squad since his arrival and he stated he is extremely pleased with what he has experienced, especially working with new coach Russell Latapy, who Hope said is very detailed and specific about what he wants from each player.

“We have a good squad (and coach), we have good technical players and a couple of new players who look good as well and I’m looking forward to it (the game)”.

Employed as a center forward for his previous two games with Barbados, Hope is quite versatile as he has played anywhere across the frontline for Carlisle United and is prepared to do the same for the Tridents.

“I don’t have a preference really, anywhere attacking is fine.  Anywhere I can help this team, I’ll play and hopefully get some goals and win the game”, Hope said.