PM: 11-plus replacement to be discussed soon 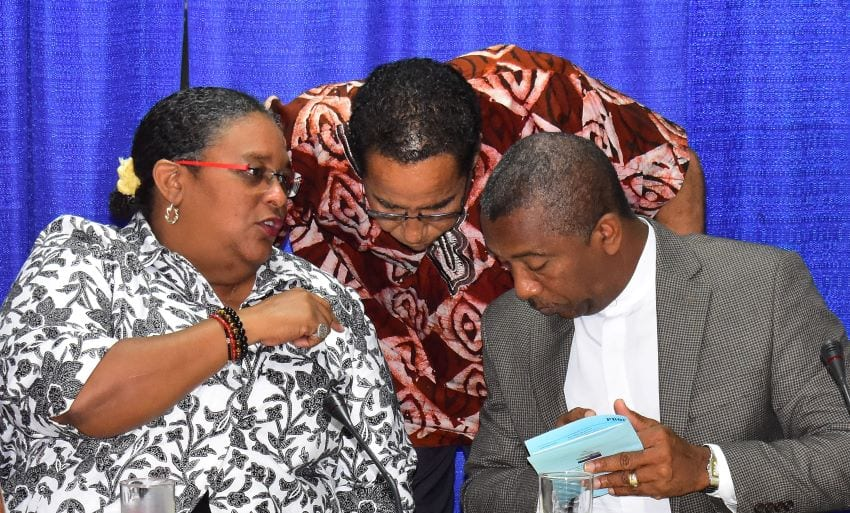 Government will soon begin the conversation about the replacement for the Barbados Secondary Schools’ Entrance Examination.

Prime Minister Mia Amor Mottley made the disclosure on Wednesday as she addressed the media launch for the Thorne Commission on Local Governance, at the Lloyd Erskine Sandiford Centre, Two Mile Hill, St. Michael.

Mottley underscored the importance of Government empowering its people, so they could be the best.

“It is why I expect my Minister of Education [Santia Bradshaw] to start the conversation, very shortly, on the replacement of the Common Entrance Exam because this country can no longer carry the burden of the discarding of 60 per cent of its population at 11 and 12 years old, as a result of a British colonial reform of the 1940s, in education.

Related article :Minister: Too many students falling below average

“And you and I know…everybody has a talent and it is for us to be patient enough and to be nurturing enough to allow every talent to shine and blossom.  That is what our educational system ought to be designed to do, and not simply to shuffle people to make them orderly and amenable to direction, law and order,” Mottley said.

The Thorne Commission on Local Governance, which is being chaired by Ralph Thorne, has been set up to oversee the process of establishing community-based people’s assemblies.

Mottley emphasized the importance of the commission and its work, which would lead to 20 community-based, people participatory governance structures.

She expressed the view that the people’s assemblies would lead to the deepening of democracy, while giving citizens an opportunity for their voices to be heard.

She told the gathering: “I stand as Prime Minister of this country, saying to you, that the days of all roads leading to the Prime Minister cannot be the model of development that this country must pursue.  I am prepared to accept that for Barbados to develop, we need to empower our people; we need to include our people and we need to create the platforms for participation.

Related article :PHOTOS: All smiles; 2019 Common Entrance results are back!

“That does not mean a government does not govern, because at the end of the day the executive…is required to execute.  It is required to take decisions, but taking decisions in a vacuum, without consultation, without caring, without sensitivity to our reality is not the model of development that we want to pursue.”

In talking about enfranchisement, Mottley said it was necessary to create the platform for ownership for workers, especially if government was not in a position to deliver a service.

She continued: “We have to create that platform for it. It is against that background that my Government believes that the participation in renewable energy must reflect at least 30 per cent local ownership, if not, we are not ensuring that the people of Barbados share in the patrimony of Barbados.”

The Prime Minister stressed that this was not Barbados’ first journey to local governance, stating that she was prepared to start to devolve some power to help the country develop.

Over the next year, the commission will consult with the public and private sectors, trade unions, educational institutions and members of the public to inform the process.

Stakeholder consultations will begin with governmental agencies in August, while town hall meetings will be held in each parish, commencing the first week of September.

Public school principals as pleased as punch with 11+ results