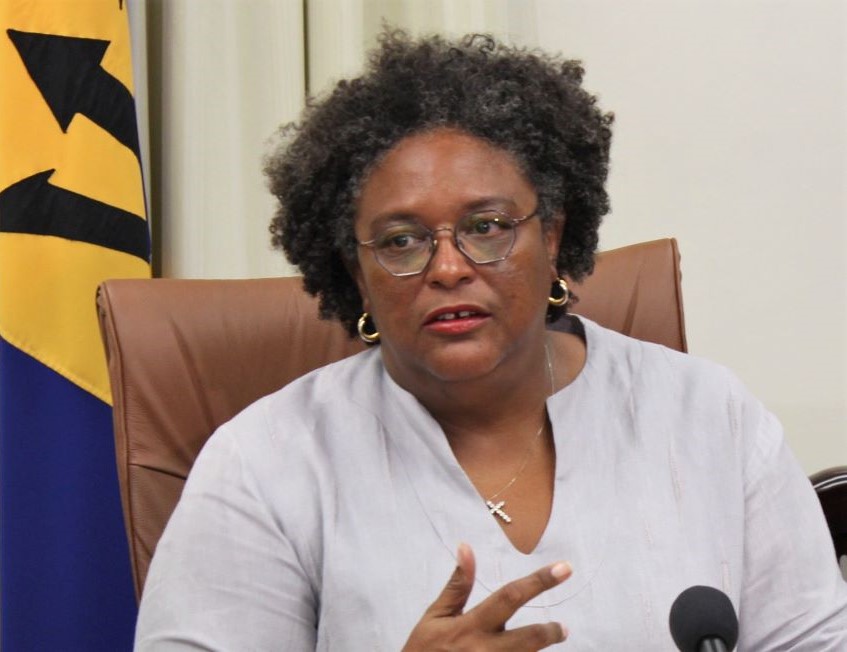 Prime Minister Mia Amor Mottley is pleased and thankful that Barbados has been removed from the European Union (EU) list of non-cooperative tax jurisdictions.

Mottley made the comments following the announcement made by the Council of the EU, and as she addressed a press briefing at Government Headquarters, following the exit of the IMF Mission.

Explaining the significance of the removal for Barbados, the Prime Minister said: “It means insurance companies that could have left us will now not do so because they will not be prohibited from doing business in Europe, [as would have been the case] as a result of the blacklist.

“This has tangible meaning for us as we go forward.  It does not mean that the battle is over because we live in a world where persons will want to continue to extract every competitive advantage that they can.”  She added that the imposition of rules and bureaucracy would act as a non-tariff barrier to keep some countries uncompetitive.

Mottley said the world was evolving and expressed the view that within the next 20 or 30 years, corporation taxes might not exist in the same way because they were too difficult for governments to track.  She opined that governments would tax transactions and assets.

“Estonia does not have corporation taxes at all; they tax dividends and…in this battle, you are going to see an evolution in how governments relate to companies and what they can tax because of the ease with which companies can move,” she stated.

She noted that the island’s international business sector had evolved over the last 40 years to respond to the changing world.

“We had foreign sales corporations in the early 80’s and early 90’s that no longer exist; we had international business companies up until December last year.  We have had so many different iterations of vehicles that changed because of the changing environment in the world.  Our ability to be nimble, flexible but always sound on the core principles to be a well regulated but competitive jurisdiction, is what will make Barbados different,” she stressed.

Mottley thanked all involved, including the Minister of International Business and Industry, Ronald Toppin, and his team, as well as Ministry of Finance officials for working so diligently to ensure Barbados was removed from the blacklist.

Back to the drawing board: UK Brexit compromise talks fail