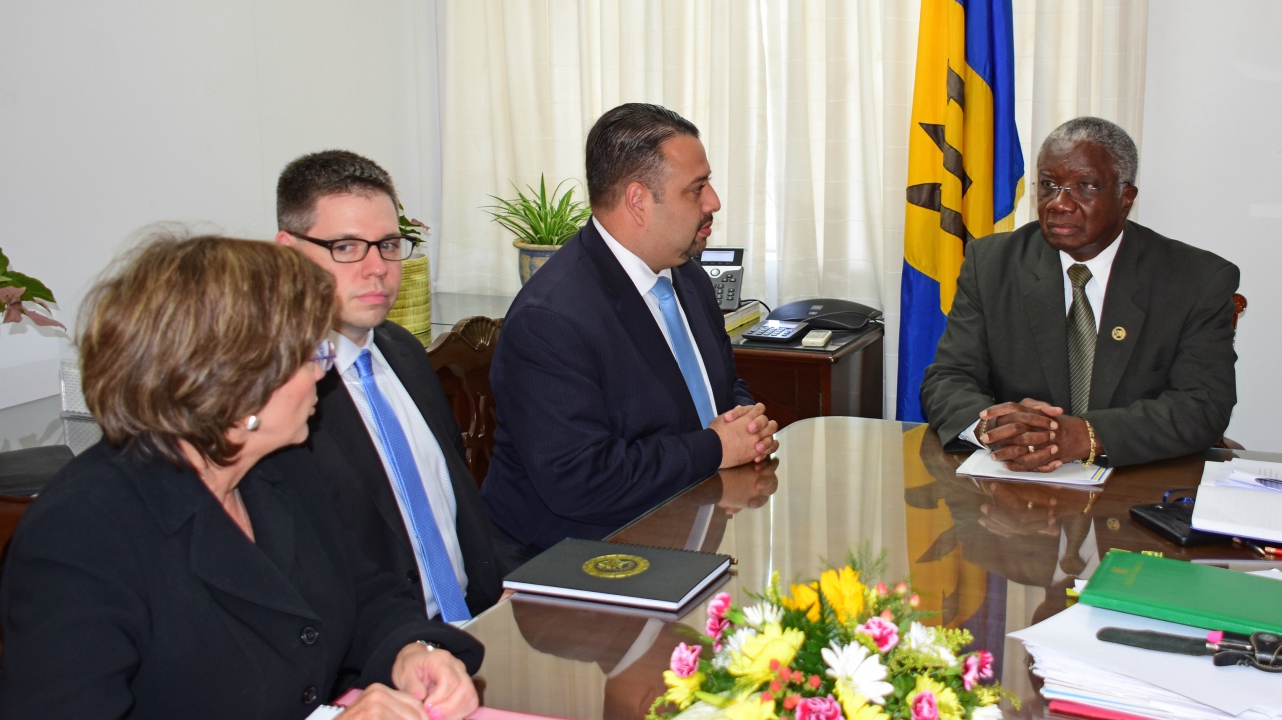 Barbados is a clean, well regulated, low tax jurisdiction and not a tax haven!

This was Prime Minister Freundel Stuart’s firm message when a delegation from the United States of America, including Chief Aides and Policy Advisors to Congressional Members Elliot Engel and Ileana Ros-Lehtinen, Eddy Acevedo and Eric Jacobstein, paid him a courtesy call recently at Government Headquarters.

PM Stuart said from time to time, this country has had to defend its reputation in that area and he called on the US to lend its voice in helping to clear up any misconceptions.

“Because companies pay low taxes here, they repatriate large profits to their jurisdictions and that money is invested there, so there is a win-win situation,” he explained.

According to him, the international business sector accounts for a significant amount of Barbados’ corporate tax revenue, brings in the second largest amount of foreign exchange and offers good quality jobs.

The Prime Minister said another area of concern was Barbados being classified as a high middle-income country and therefore did not qualify for necessary concessional financing. He stressed, however, that all countries in the Caribbean were vulnerable and identified hurricanes as being able to wipe out their GDP within a few hours.

He noted that Barbados was leading the charge for a vulnerability index for small island developing states to deal with those issues and pointed out that New Zealand has joined the cause.

Stuart thanked the US officials for their interest in Barbados, saying that Ambassador Taglialatela had been serving her country and the Caribbean very well. He noted that the relationship between Barbados and the US had deepened as a result of her being here.

“Barbados values very highly its relationship with the US. It is an old relationship that predates our Independence, but there is still scope to deepen relations. The two countries understand that they need each other and that is why there is the US-Caribbean Strategic Engagement Act,” he stated.

During the visit, Mr. Acevedo and Mr. Jacobstein met with key national and regional stakeholders to get a better sense of the impact of US support and assistance to the region.

Acevedo serves as Senior Foreign Policy Advisor and Staff Director for the Subcommittee on Middle East and North Africa for the House Foreign Affairs Committee, under the leadership of Chairman Ileana Ros-Lehtinen. Jacobstein is a senior policy advisor on the House Committee on Foreign Affairs democratic staff, managing the Western Hemisphere portfolio for Ranking Member Eliot Engel and Committee Democrats.

Engel and Ros-Lehtinen have been advocating for adequate funding for Caribbean specific programmes, including the Caribbean Basin Security Initiative.