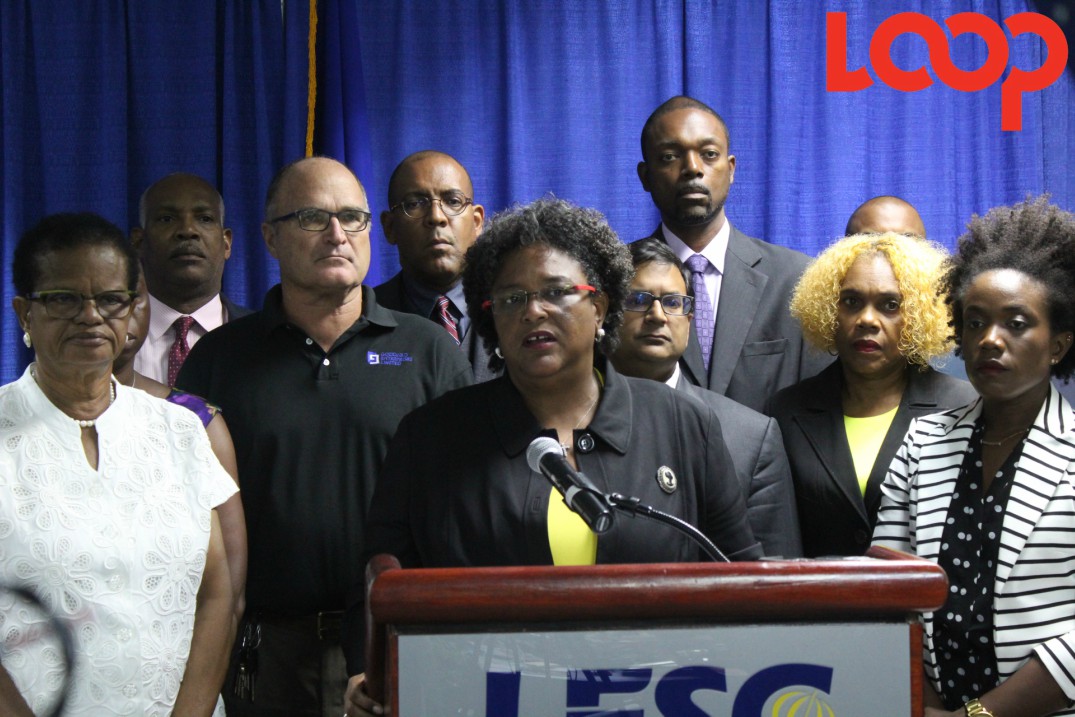 Prime Minister Mia Mottley and members of the Social Partnership during a economic press briefing.

The announcement follows the general election held on May 24, 2018, and an in-depth review of the latest fiscal and external liquidity situation carried over the course of the last week by the incoming administration. The Government announced that this review has identified and quantified substantial arrears that were not previously included in headline public debt figures. When added to the published figures, total public debt reaches over 175% of GDP.

Further, discussions with the Central Bank of Barbados (CBB) have established that gross international reserves stood at only US$220 million as of May 31, 2018, which is equivalent to 7 weeks worth of export cover. The Government of Barbados announced that in light of what it has found, it would be seeking the cooperation of its domestic and external creditors in restructuring its public debt.

This exercise will address the severe challenges presented by current debt service commitments and, in conjunction with corrective economic and fiscal measures to be shortly introduced by the Government, will place the public debt on a sustainable footing, Taking into account the country’s international reserves position and the CBB’s projections for further declines as the year progresses, the Government announced that it is, today, suspending payments due on debts owed to external commercial creditors.

The Government will endeavor to make scheduled domestic interest payments, but domestic creditors will be asked to roll over principal maturities until restructuring agreements are concluded. The Government is finalizing a comprehensive economic reform programme. This programme will seek to stabilize the public finances after years of mismanagement and create conditions for the return of sustained economic growth to Barbados.

The plan is designed to attract balance of payments support from the International Monetary Fund (IMF) and the Government has invited a mission from the IMF to visit Bridgetown shortly. Commenting on today’s announcement, Prime Minister and Minister of Finance, Economic Affairs and Investment, The Hon. Mia Mottley, Q.C., M.P. said:

“My Government and all parts of the Social Partnership agree that there is no avoidance in delay in treating the economic and financial irresponsibility of the recent past. Our national reconstruction starts today. We set course, not on the easy or quick path but the right path. We will protect the most vulnerable, but we will all have to make sacrifices for our country. Today we move forward together in a new spirit of openness and with a new covenant of hope and opportunity. I ask our domestic and external creditors to accompany us on this journey of rescue, rebuilding and transformation.”

“We are members of the International Monetary Fund, and last night I called Madame Lagarde, its Managing Director. I briefed her on the present state of the public finances, the current debt and reserve positions, and assured her that we are committed to taking decisive action to rebuild Barbados. In turn, Madame Lagarde assured me that the IMF stands ready to lend Barbados the necessary assistance and support to these actions.”

The Prime Minister and Minister of Finance noted that “the hour is late, the path ahead is not easy, but dawn is on its way”.

IMF programme will leave the poor behind, warns Paul