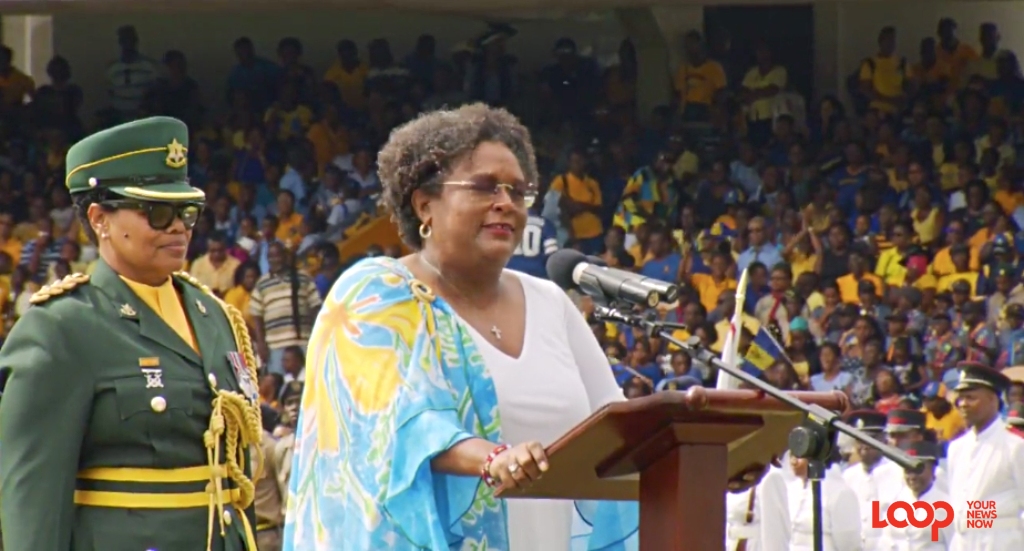 Prime Minister Mia Mottley delivering her first Address to the Nation on a Barbados Independence Day as leader of this country.

The Prime Minister of Barbados Mia Mottley did not let her promise to the late Sir Clifford Husbands die.

When she was the Leader of Opposition, in the Lower House after his passing and funeral service last year, she said that if she ever got the opportunity to influence the nation's youth and youngest citizens to ensure that they know their heritage and participate in the Independence celebrations, she would do it.

And by the power vested in her now as the Leader of country Barbados, she did just that. Hence 'We Barbados - More than a Parade' was born.

She made sure that every young Head Boy and every Head Girl walked before leaders in this great nation and received their badges of honour. School bands played along the parade path. She incorporated from the smallest Blossom and Beaver to the retired Regiment in 'We Barbados - More than a Parade'. She saw that Barbadians and tourists alike could not only see the drills and displays but could have opportunities to see the march pass and parade on Independence Day 2018 as well.

Just as she remembered the words of the departed former Governor General of Barbados, about his traditions as a child when Barbados was still a colony of the United Kingdom, she made sure that every school child and every young Barbadian at home or abroad could be part of this country's 52nd Anniversary of Barbados.

"The thing that stands in my mind the most as an uncompleted task that we may want to pay tribute to Sir Clifford on as we go forward as a nation in the next 50 years was the conversation that he would have with me, ironically every November.”

She said that annually for some four or so years straight he has questioned why today’s generations do not understand the importance of building this nation.

Using himself as an example, Mottley said Sir Clifford told her that as a young child, he had to go out with the Union Jack, and they all had to sing ‘God save the King’ and then the Queen, “and we have broken unto ourselves the notion of independence but we do not ask our children to associate with it on the day on which we celebrate. It makes eminent sense to me.”

And on that day, she said, "And the truth is, if ever I get the chance to influence it, I will.”

Well, in 2018, during the first year of her prime ministership, she kept her promise to the dear departed son of our soil, as she hopes that by way of participating in the Independence ceremony that each child got "a keener appreciation of what it means to be a Barbadian.”