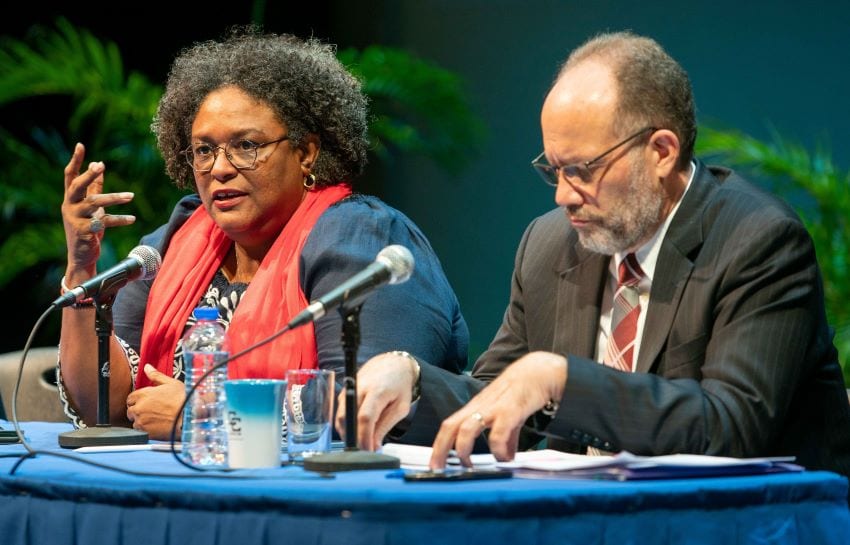 Prime Minister Mia Amor Mottley wants the people of the Caribbean to recognize that Caribbean countries need each other, especially in the area of climate change and business.

Her comments came as she delivered opening remarks at a Town Hall meeting yesterday, under the theme 'The CARICOM Single Market and Economy (CSME) – What is in It for Me?' at the Walcott-Warner Theatre, University of the West Indies, Cave Hill Campus.

Mottley has lead responsibility for the CSME in CARICOM’s quasi cabinet.

She said: “I want to suggest to you that what is in it for you is everything, because your ability to be able to fight off the worst impacts of [the] climate crisis depends on us coming together as one and raising our voice, and even then there is no guarantee.

“Your ability to have a larger market will be critical if you’re going to drive down your prices to enhance your competitiveness to allow for greater profitability.  The ability for us to be able to have the levels of functional cooperation that have been quietly working for us without any big set of noise as we have seen with CXC, as we have seen in other areas of public health and in the testing of our labs.  These things are working for us, but for some reason we don’t believe that if we are stronger together there, that we can be stronger together in the context of the Single Market and Single Economy.”

Mottley noted that the prospect of having eight general elections within the Caribbean over the course of the next 15 months, was cause for concern, as it would affect the pace and progress of the implementation of the Single Market and Economy.

“Now, the sustainability of the integration movement ought not to depend on whether a domestic election is being held or not. And it is one of those issues that we will have to come to grips with in terms of reforming our integration movement,” she added.

The Prime Minister contended that the Heads of Government of the European Union had deliberations “almost every two or three weeks”, but yet CARICOM Heads of Government, although they were faced with pressing issues, only meet twice yearly.

She said this had to change if the CARICOM movement was to be brought fully into the third decade of the 21st century.

Speaking about the need to embrace technology to propel business development, Ms Mottley told those gathered that since the 1980s, growth in the Caribbean had fallen below that of other major regions, who were using the same technology “to leapfrog us”.

She said that in Africa, Kenyans could do their business using digital money, and that technology made doing business much easier, especially over long distances.

She pointed out that it was projected in 2050, that except for those on the South American continent, “the rest of us will fall essentially to constitute one of the poorest performing regions in the entire world with respect to GDP growth per capita”.

“How do we come to accept that we will continue to have a situation where we have surplus liquidity within this region, but those businesses within the productive sector, small, medium, large, even now, have difficulty in accessing funds in the region. How do we believe that our citizens will continue to believe that it can be business as usual to have to file new documents in each territory to form a company or to do business in Suriname, in Guyana, in St Vincent, in Grenada, in St. Lucia, in Barbados, in Jamaica, in Belize?” she queried.

The town hall meeting was organized by the CARICOM Secretariat, the University of the West Indies and the Prime Minister’s Office, with funding being provided by the Caribbean Development Bank.