Skip to main content
Breaking News |
10 Things parents must do on Common Entrance Day 2020
Chefette Restaurants defends new delivery fee on social media
VIDEO: Beenie Man’s mother hospitalised after suffering strokes
Trinibad artiste 'Rebel Sixx' shot dead
7-year-old among 13 killed in weekend shootings in Chicago
Three teens attacked near Browne's beach, two stabbed
Barbadianista Carla is one chic who works outside the box creatively
Fuel prices at the pump going up from midnight
Ministry of Education: No marks for students at the end of Term 3
Coronavirus cases in the Caribbean as of July 6 at 1 pm: 56,175

Police warned not to get caught on camera, nor by lie detector

Carl Cummins (left) was named the Most Outstanding participant amongst the participant. (right) Acting Assistant Commissioner of Police responsible for crime, Colvin Bishop

In a day of social media and smartphones, 21 detectives and police officers from other departments were warned to be on their best behaviour always. 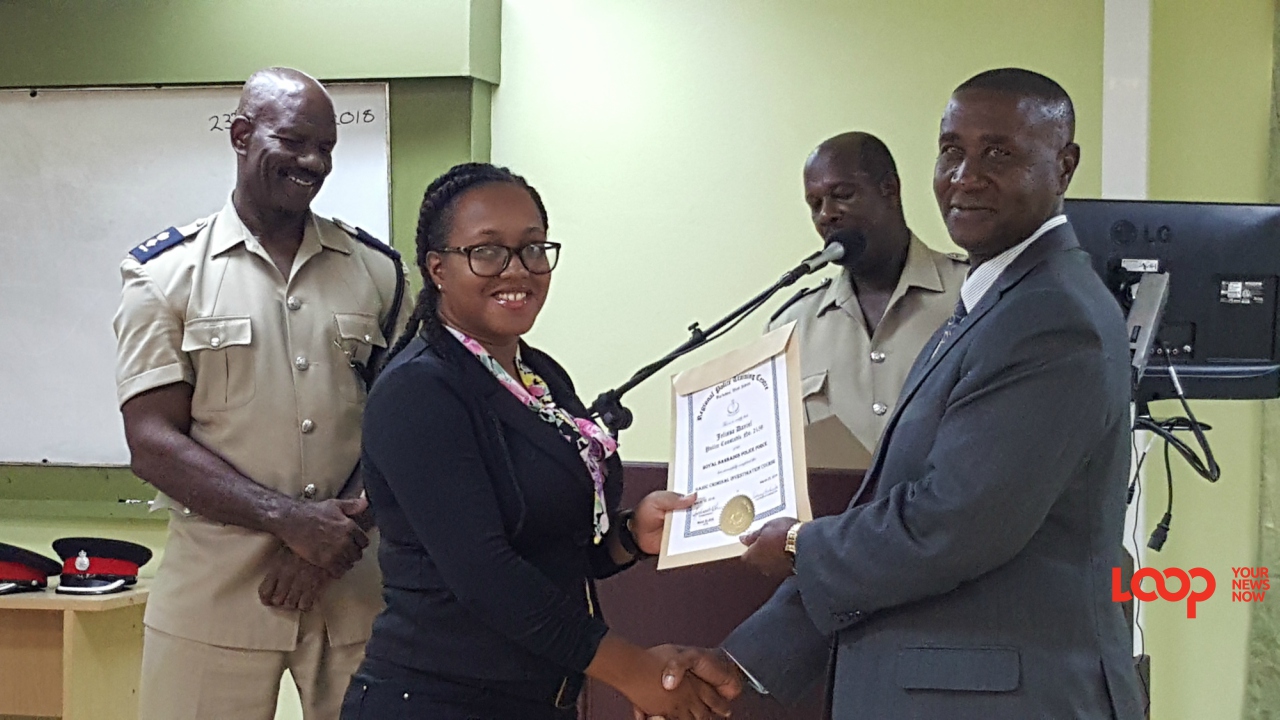 Photo: Jelissa Daniel being presented with her certificate.

He told them that people are watching their every action and even recording them.

“The rights of persons must be protected, it is therefore imperative that you as police officers must be mindful of your general conduct when dealing with individuals and or suspects while conducting investigations.

“Social media can also serve to exhibit any bad behaviour or ill-treatment of others by police officers.”

This warning came on the heels of a video in circulation showing police officers using what members of the public deemed ‘excessive force’ to apprehend a public service vehicle (PSV) operator. The incident was recorded by a bystander.

“Be accountable to the communities you serve, be honest, truthful and treat everyone in a fair, empathic and ethical manner… The public expects the best of you and for you to be courteous at all times.”

And he let them know that their indiscretions if such occurs, will not be swept under the rug if they are found guilty of any wrongdoing.

“There is no room for corruption in your profession as a police officer and I am seeking to impress upon you that if you are caught in any manner of corruption you will be dealt with in accordance with the Code of Discipline and eventually end up before the Law Courts.”

Furthermore, he assured the public that all officers will be held accountable.

“Those of you who now have completed this course and are endeavouring to become detectives will have to undergo a truth verification test. That is to undergo a polygraph examination to satisfy the Administration that you can operate in the area of the Criminal Investigations Department (CID).

“As a matter of fact, all police officers at some point may have to undergo such test.”

Bishop told the media on the sidelines of the closing ceremony held at the Regional Police Training Centre that the use of the polygraph test for CID detectives is not new but it will be done "more frequently" to ensure the public gets the "best police officers."

Carl Cummins was named the Most Outstanding participant amongst the participants.