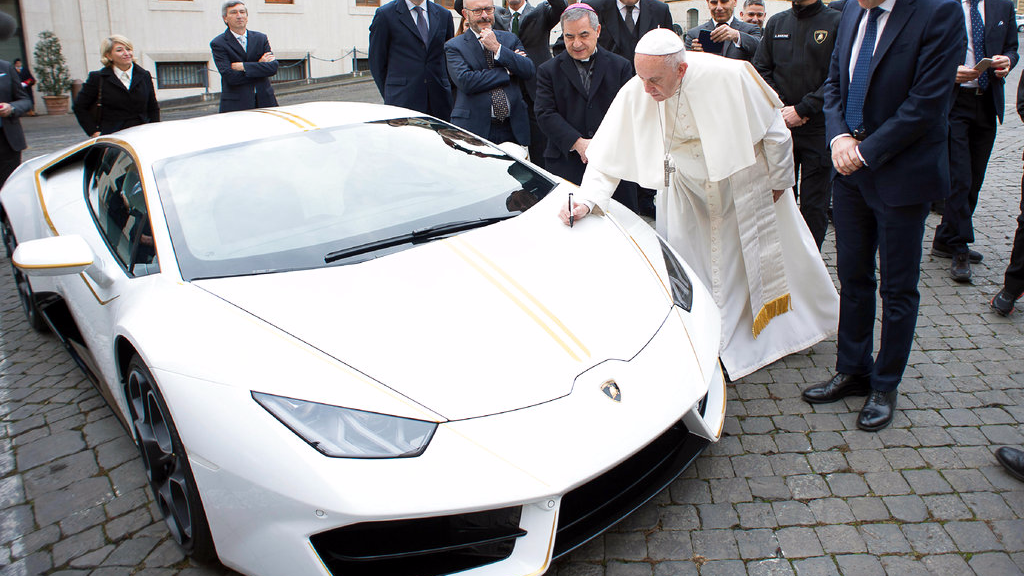 Pope Francis got the keys to a fancy new Lamborghini on Wednesday — but he won't be tooling around the Vatican gardens in it.

Instead, the special edition Huracan will be auctioned off by Sotheby's, with the proceeds going to charities including one aimed at helping rebuild Christian communities in Iraq that were devastated by the Islamic State group.

Officials from the luxury sports car maker presented Francis with the sleek white car with papal yellow-gold detailing on Wednesday, outside the Vatican hotel where he lives. The pope promptly blessed it.

Base prices for the Huracan, which was first introduced in 2014, usually start at around 183,000 euros ($217,000.) A special edition built for a papal charity would be expected to fetch far more at auction.

Francis got around his native Buenos Aires on public transport and has long railed against people who buy the latest model cars or cellphones. As pope, he uses a blue Ford Focus inside the Vatican walls, and he has made a statement on all his foreign trips by shunning fancy, bullet-proof SUVs and opting instead for modest Fiats or KIAs.

Some of the funds raised from the auction will go to rebuilding homes, churches and public buildings in Iraq's Nineveh Plains that were devastated during three years of fighting by the Islamic State group. The Vatican said the aim is to allow Christians who were forced to flee Nineveh "to finally return to their roots and recover their dignity."

Other funds will go to charities that help women who are trafficked and forced into prostitution, and those that provide medical care in Africa.

The Sant'Agata Bolognese-based Lamborghini is owned by Germany's Volkswagen.