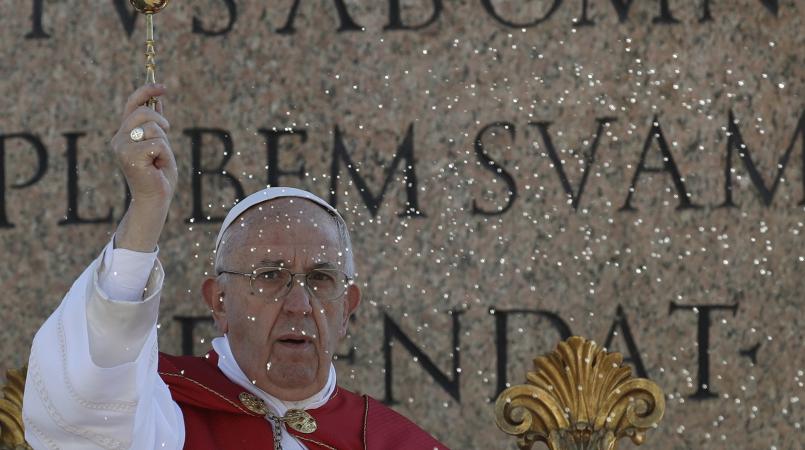 The latest on a church bombing north of the Egyptian capital.

French President Francois Hollande has expressed solidarity with Egypt following a deadly bombing at a church in the Nile Delta, north of Cairo.

In a written statement after Sunday's attack, Hollande says "one more time, Egypt is hit by terrorists who want to destroy its unity and its diversity."

He says France "mobilizes all its forces in association with the Egyptian authorities in the fight against terrorism," and offers condolences to the families of the victims.

The bomb ripped through a church in the town of Tanta that was packed with Palm Sunday worshippers. Coptic Christians make up 10 percent of Egypt's population, and have been repeatedly targeted by Islamic extremists.

No one immediately claimed responsibility for the latest attack.

Pope Francis has decried a deadly attack on a Coptic church in Egypt during Palm Sunday celebrations, just weeks before his planned visit to Cairo.

The pontiff expressed his "deep condolences to my brother, Pope Tawadros II, the Coptic church and all of the dear Egyptian nation," and said he was praying for the dead and wounded in the attack. Word of the bombing came as Francis himself was marking Palm Sunday in St. Peter's Square.

The pope's remarks on the church attack were handed to him on a piece of paper after he remembered the victims of the Stockholm attack Friday night. The bombing killed 25 people and wounded another 71, according to Egyptian officials.

An Egyptian official says a church bombing north of Cairo has killed 21 people and wounded another 38.

Magdi Awad, the head of the provincial ambulance service, confirmed the toll from the bombing of a church in Tanta that was packed with Palm Sunday worshippers.

No one immediately claimed the attack.

Coptic Christians make up 10 percent of Egypt's population and have repeatedly been targeted by Islamic extremists.

Egypt state media says a bomb has gone off in a church in the Nile Delta, causing casualties.

The explosion took place in the town of Tanta as Coptic Christians were marking Palm Sunday. Christians make up around 10 percent of Egypt's population and have repeatedly been targeted by Islamic extremists.