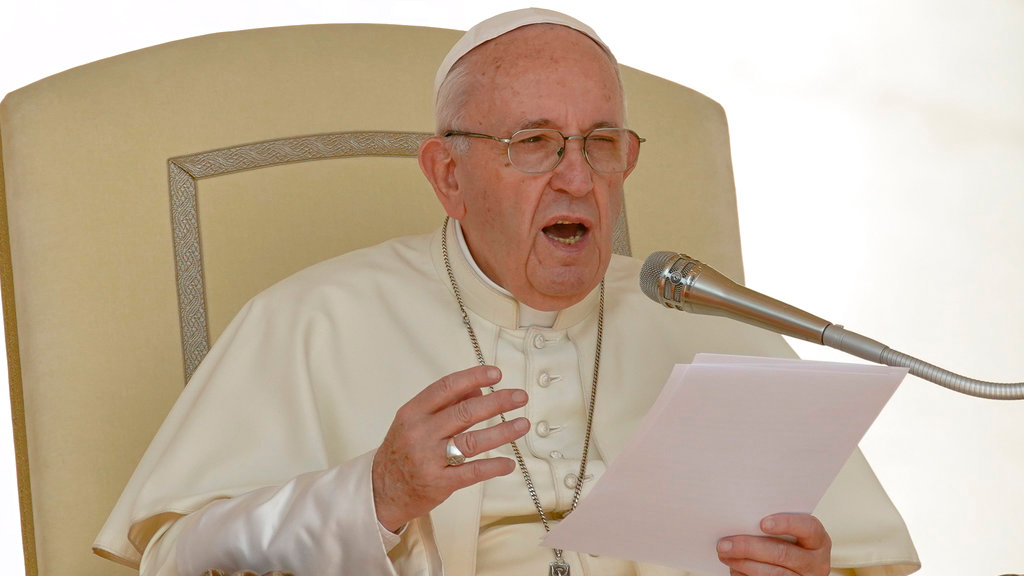 Pope Francis lamented Wednesday how Irish church authorities failed to respond to the crimes of sexual abuse, speaking during his first public appearance at the Vatican after bombshell accusations that he himself covered up for an American cardinal's misdeeds.

Francis presided over his weekly general audience in St. Peter's Square and spoke about his weekend trip to Ireland, where the abuse scandal has devastated the Catholic Church's credibility. The final day of the trip was overshadowed by the release of a document from a retired Holy See diplomat accusing Vatican authorities, including Francis, of covering up for ex-Cardinal Theodore McCarrick despite knowing for years that he regularly slept with seminarians.

The author of the document — retired Vatican ambassador to the U.S., Archbishop Carlo Maria Vigano — said Francis should resign for his complicity in the McCarrick scandal, which has implicated two decades' worth of U.S. and Vatican church leaders.

Francis referred Wednesday to the Irish culture of cover-up, but he omitted from his remarks a line in his prepared text noting how he had prayed in Ireland for the Virgin Mary to intervene to give the church strength to "firmly pursue truth and justice" to help victims heal.

U.S. bishops, as well as rank-and-file Catholics, have called for an independent investigation to find out who knew about McCarrick's abuse and when, and how he was able to rise through the ranks even though it was an open secret that he regularly invited seminarians to his New Jersey beach house and into his bed.

Francis last month removed McCarrick as a cardinal and ordered him to live a lifetime of penance and prayer after a U.S. church investigation determined that an allegation he groped a teenage altar boy in the 1970s was credible.

Vigano's 11-page j'accuse alleges that Francis knew of McCarrick's penchant for adult seminarians starting in 2013, but rehabilitated him from sanctions that Pope Benedict XVI had allegedly imposed on him in 2009 or 2010. The claims have shaken Francis' five-year papacy.

There is ample evidence, however, that the Vatican under Benedict and St. John Paul II also covered up the information, and that any reported sanctions Benedict imposed were never enforced since McCarrick travelled widely for the church during those years, including to Rome to meet with Benedict and celebrate Mass with other U.S. bishops at the tomb of St. Peter.

Vigano provided no evidence that Francis had lifted the alleged sanctions, saying only that McCarrick announced after a meeting with the pope that he was going to China.

But he said McCarrick had become a close adviser to Francis, who was seeking to appoint more pastorally-minded bishops to the U.S. church, which he believed had become too ideologically driven by right-wingers.

Pope on sex abuse: "We showed no care for the little ones"