Portugal faces dire drought, the worst in more than 20 years 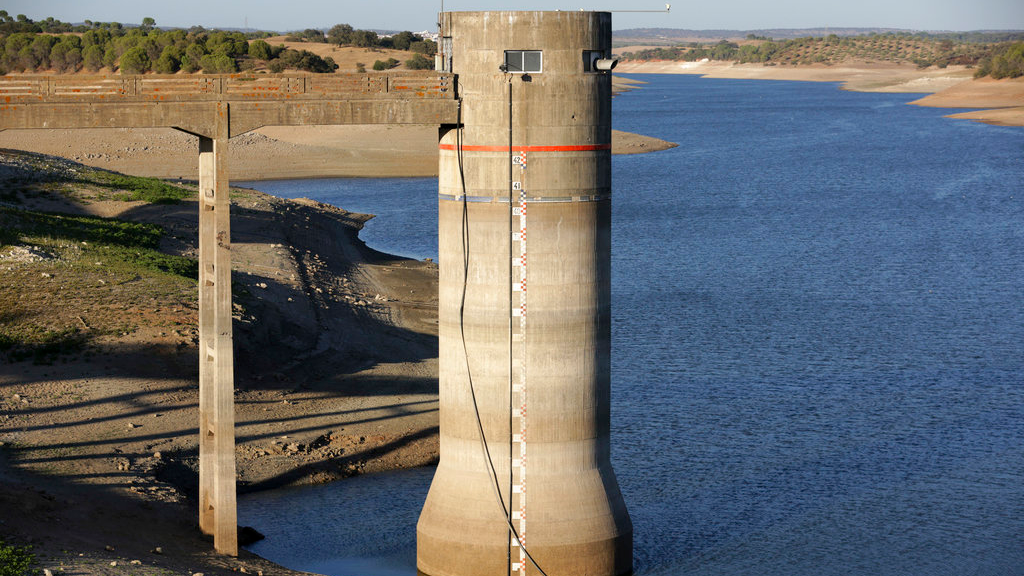 Portugal's Pego do Altar reservoir looks like disused quarry now, its bare, exposed slopes rising up steeply on each side and shimmering in the sun as it holds barely 11 percent of the water it was designed for.

The huge lake where people used to swim, boat and fish has shrunk to a slither of water, surrounded by baked, cracked earth and a handful of white fish carcasses. It is a desolate and disturbing sight — and one that has become increasingly common in southern Portugal.

While parts of the United States and the Caribbean are drowning in water amid ferocious hurricanes, a drought is tightening its grip on wide areas of Portugal.  More than 80 percent of the country is officially classified as enduring "severe" or "extreme" drought — conditions among the country's worst in more than 20 years.

Water has sporadically been scarce in this part of southern Europe for centuries. But Portuguese Environment Secretary Carlos Martins tells The Associated Press that "it has gotten worse with climate change."

The prolonged dry spell is most acute in the Alentejo region, south and east of Lisbon, the capital. Here, the essential river is the Sado,

Portugal's seventh-largest. As its flow has dwindled, so the reservoirs in the river basin, such as Pego do Altar, are drying up. In some places now, the Sado is a thin, knee-deep flow.

The receding water at Pego do Altar has exposed a small, 18th-century stone bridge which was last seen in 1999. Locals have been coming to take photos of themselves next to it.

The dead fish in Pego do Altar's dried mud are the canary in the mine for authorities. Large numbers of fish dying due to depleted oxygen levels would contaminate the area's public drinking water, so a program to scoop out the doomed fish from four Sado basin reservoirs is now underway. It's a race against the clock.

"It's a preventive measure," says Carlos Silva, a spokesman for EDIA, a state company that helps manage the Alentejo's water supply. "It would be a catastrophe if the fish started dying off" in large quantities.

As gray herons watch from the bank and birds of prey glide silently by, fishermen Tomaz Silva, 25, and Miguel Farias, 29, nudge their boat toward silver nets buoyed by empty plastic water bottles that they had strung across the reservoir the previous day. Chatting in a strong Alentejo accent, they throw the fish into a box where they flap around. Some weigh 5 or 6 kilograms  (up to 13 pounds) and are as long as an adult's arm. Many, however, are skinny due to the fierce competition for diminishing food.

With the water level so low, it's a bit like shooting fish in a barrel.

Silva and Farias catch on average between 1 and 1.5 metric tons a day. Their haul is taken away to be turned into fishmeal. Over about six weeks, officials expect to harvest more than 100 metric tons from the four Sado reservoirs.

Martins, the environment secretary, said a government drought monitoring committee is working to reconcile the conflicting demands placed on the region's scarce water resources. Making sure there's enough water for drinking faucets is the top priority, he says.

That could end up bringing a ban on the irrigation of farmland, which uses up 80 percent of the region's available water. Farmers are fretting over their parched pasture land and wilting cereal crops. Cattle breeders are demanding drinking water for their livestock. And energy companies want water to flow to keep up their hydroelectric production at dams.

The Alentejo is a famously pretty part of Portugal, with groves of olive trees, stone pines and cork oaks — native varieties resilient enough to survive its weather extremes. But it's also one of the European Union's poorest regions — sparsely populated, covering 34 percent of the country but containing only 7 percent of its population. Almost half of its residents are more than 65 years old.

Many people here make a living from farming, and cutting off irrigation would sound the death knell for their jobs.

At Torrao, a 15th-century hilltop village with a panoramic view of the Sado basin's Vale do Gaio reservoir, locals live with daily evidence of the drought.

Antonio Sardinha, an 82-year-old subsistence farmer with thick fingers and a sun-kissed complexion, says he has never seen the reservoir so low. Official records say it's at 18 percent of capacity.

The water in his well is so shallow, he says, that his bucket hits the bottom. "Water is the key to everything," Sardinha said. "You need water to create everything else."