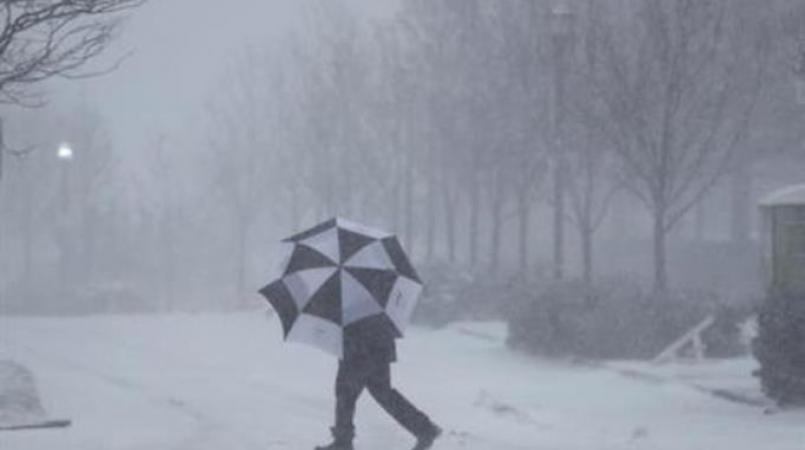 The storm has the potential for more than a foot of snow along the heavily populated Philadelphia-to-Boston corridor, making for a slippery commute and giving millions of people weather whiplash a day after temperatures soared into the 50s and 60s.

Commuters faced windblown snow and slick highways. Forecasters said Thursday's weather had the potential to be the most powerful storm that some areas have seen in a mostly snow-free winter. Schools were closed in Albany, New York City, Philadelphia and Boston, numerous accidents were reported and more than 3,000 flights were canceled.

The National Weather Service predicted that the Boston area and eastern Maine could get 12 to 18 inches of snow, and a blizzard warning has been issued for all of Long Island until 6 p.m. New York City could see 8 to 12 inches and the Philadelphia area 4 to 8 inches. Near whiteout conditions were possible, with the snow expected to fall at a clip of 2 to 4 inches per hour at its peak.

Airlines scrapped thousands of flights by late Wednesday as a precaution, and FlightAware.com reported 3,323 flights were canceled Wednesday through Friday, including more than 2,700 on Thursday.

Massachusetts activated its emergency management bunker in Framingham, where Gov. Charlie Baker was scheduled to provide updates on the storm at midday. Baker urged people to stay off the roads to allow plows and sanders to do their work.

Eastern Long Island braced for up to 16 inches of snow, with a potential for power outages. "The roads are in bad shape ... covered and icy," Suffolk County Police Commissioner Tim Sini said. He said snow was falling at up to 2 inches per hour and was expected to intensify.

"If you need to go out, please, don't use your car," de Blasio said on NY1 television.

Sam Lopresti, of Jersey City, New Jersey, warm and dry in his workplace, said he'd been pleasantly surprised that his early-morning train trip to Manhattan had gone smoothly.

"I fully expected the MTA and PATH to curl into a ball and say, 'Don't hurt me!'" joked Lopresti, an actor and barista.

Lopresti said weather forecasts had escalated from "a run of the mill snowstorm to an apocalyptic deal."

New Jersey's emergency management office reported about 50 accidents before midmorning, and that number was expected to grow. New Jersey Transit trains face delays of up to 15 minute.

State offices in New Jersey were closed, as were the courts in Massachusetts. Government offices in the Delaware, Bucks, Chester and Montgomery counties surrounding Philadelphia were also shuttered.

The storm comes a day after much of the Northeast enjoyed a brief glimpse of spring, with temperatures hitting 60 degrees in some places.

Thursday's storm was expected to last 6 to 10 hours, said Carl Erickson, a senior meteorologist with AccuWeather in State College, Pennsylvania.

The snow was expected taper off by the early afternoon in the Philadelphia and New York City areas, but New Englanders were bracing for snowfall through the evening commute.

FEATURED IMAGE CAPTION: A person shields itself from snow with an unbrella, Thursday, Feb. 9, 2017 in Jersey City, N.J. A powerful, fast-moving storm swept through the northeastern U.S. Thursday, making for a slippery morning commute and leaving some residents bracing for blizzard conditions.