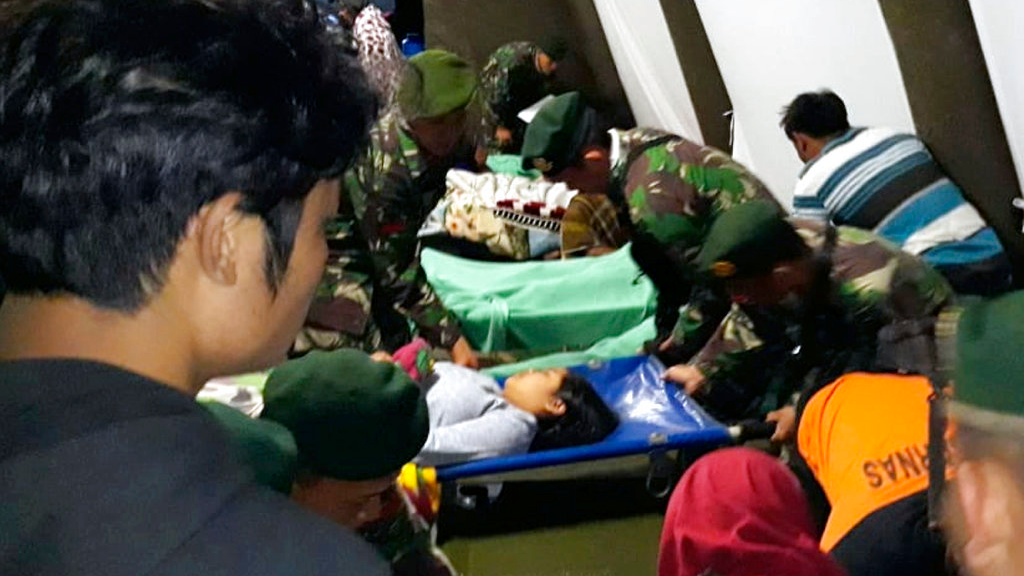 Indonesian soldiers tend to a woman injured in the earthquake at a makeshift hospital in Lombok, Indonesia, Sunday, Aug. 5, 2018. A strong earthquake struck Indonesia's popular tourist island of Lombok on Sunday, triggering a tsunami warning, one week after another quake in the same area killed more than a dozen people. (AP Photo)

A powerful earthquake struck the Indonesian tourist island of Lombok on Sunday, killing at least 82 people and shaking neighbouring Bali, one week after another quake on Lombok killed more than a dozen.

The latest quake, which triggered a brief tsunami warning, damaged buildings as far away as Denpasar on Bali, including a department store and the airport terminal, where ceiling panels were shaken loose, authorities said.

Video showed screaming people running in panic from houses in a Bali neighbourhood and vehicles rocking. On Lombok, soldiers and other rescuers carried injured people on stretchers and carpets to an evacuation centre.

Thousands of houses were damaged, and most of the dead victims were hit by collapsed houses, Nugroho said.

The quake, recorded at magnitude 7.0 by the U.S. Geological Survey, struck early Sunday evening at a depth of 10.5 kilometres (6 miles) in the northern part of Lombok.

"I was watching TV when I felt a big shake," said Harian, a Lombok woman who uses one name. "The lamp was shaking, and people were shouting 'Get out.' I ran out into the dark because the power cut off."

The quake was felt strongly across Lombok and Bali and had damaged houses on both islands, Nugroho said.

Frightened people poured out of their homes to move to higher ground, particularly in North Lombok and Mataram, the capital of West Nusa Tenggara province, said Iwan Asmara, a Lombok disaster official.

The Bali and Lombok airports continued operating Sunday night, according to the director general of civil aviation. There had been a half-hour evacuation at the Lombok airport following the quake because the electricity went off. TV showed crying women consoling each other outside Lombok's airport.

The island was already reeling from a magnitude 6.4 quake on July 29, which killed 16 people.

Like Bali, Lombok is known for pristine beaches and mountains. Hotels and other buildings in both locations are not allowed to exceed the height of coconut trees.

Indonesia is prone to earthquakes because of its location on the Pacific "Ring of Fire," an arc of volcanoes and fault lines in the Pacific Basin. In December 2004, a massive magnitude 9.1 earthquake off Sumatra island triggered a tsunami that killed 230,000 people in a dozen countries.