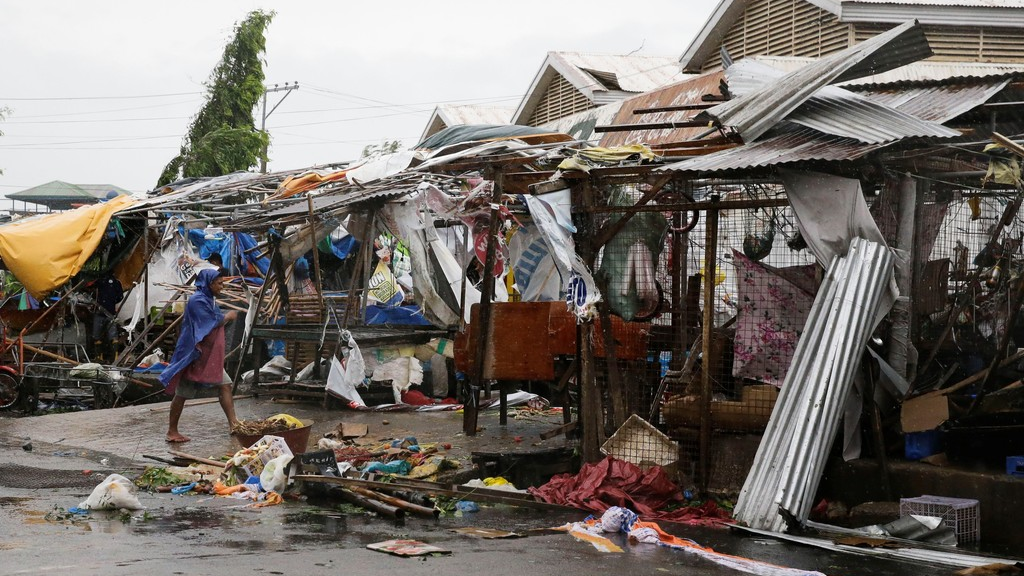 A resident looks at market stalls destroyed by strong winds as Typhoon Mangkhut barreled across Tuguegrao city in Cagayan province, northeastern Philippines on Saturday, Sept. 15, 2018. The typhoon slammed into the Philippines northeastern coast early Saturday, it's ferocious winds and blinding rain ripping off tin roof sheets and knocking out power, and plowed through the agricultural region at the start of the onslaught. (AP Photo/Aaron Favila)

Typhoon Mangkhut lashed the northern Philippines with destructive winds and heavy rain that set off landslides and destroyed homes on Saturday, leaving at least 12 people dead, as Hong Kong and other parts of southern China braced for the powerful storm.

The most ferocious typhoon to hit the disaster-prone Philippines this year slammed ashore before dawn in Cagayan province on the northeastern tip of Luzon island, a breadbasket that is also a region of flood-prone rice plains and mountain provinces with a history of deadly landslides.

China and the Philippines agreed to postpone a visit by Chinese Foreign Minister Wang Yi that was to start Sunday due to the onslaught, which caused nearly 150 flights, a third of them international, to be cancelled and halted sea travel.

Presidential adviser Francis Tolentino said the 12 died mostly in landslides and houses that got pummeled by the storm's fierce winds and rain. Among the dead were an infant and a two-year-old child who died with their parents after the couple refused to immediately evacuate from their high-risk community in a mountain town in Nueva Vizcaya province, Tolentino said.

"They can't decide for themselves where to go," he said of the children, expressing frustration that the tragedy was not prevented.

Tolentino, who has been assigned by President Rodrigo Duterte to help coordinate disaster response, said at least two other people were missing and added that the death toll could climb to at least 16 once other casualty reports were verified.

Mayor Mauricio Domogan said at least three people died and six others were missing in his mountain city of Baguio after strong winds and rain destroyed several houses and set off landslides, which also blocked roads to the popular vacation destination. It was not immediately clear whether the deaths and missing cited by Domogan had been included in Tolentino's count.

Authorities were verifying the drownings of three people, including two children who reportedly died as the typhoon approached. About 70 men reportedly returned to their coastal village in Cagayan to check on their homes as the typhoon drew closer Friday, but Tolentino said he had received no report of the men figuring in an accident. 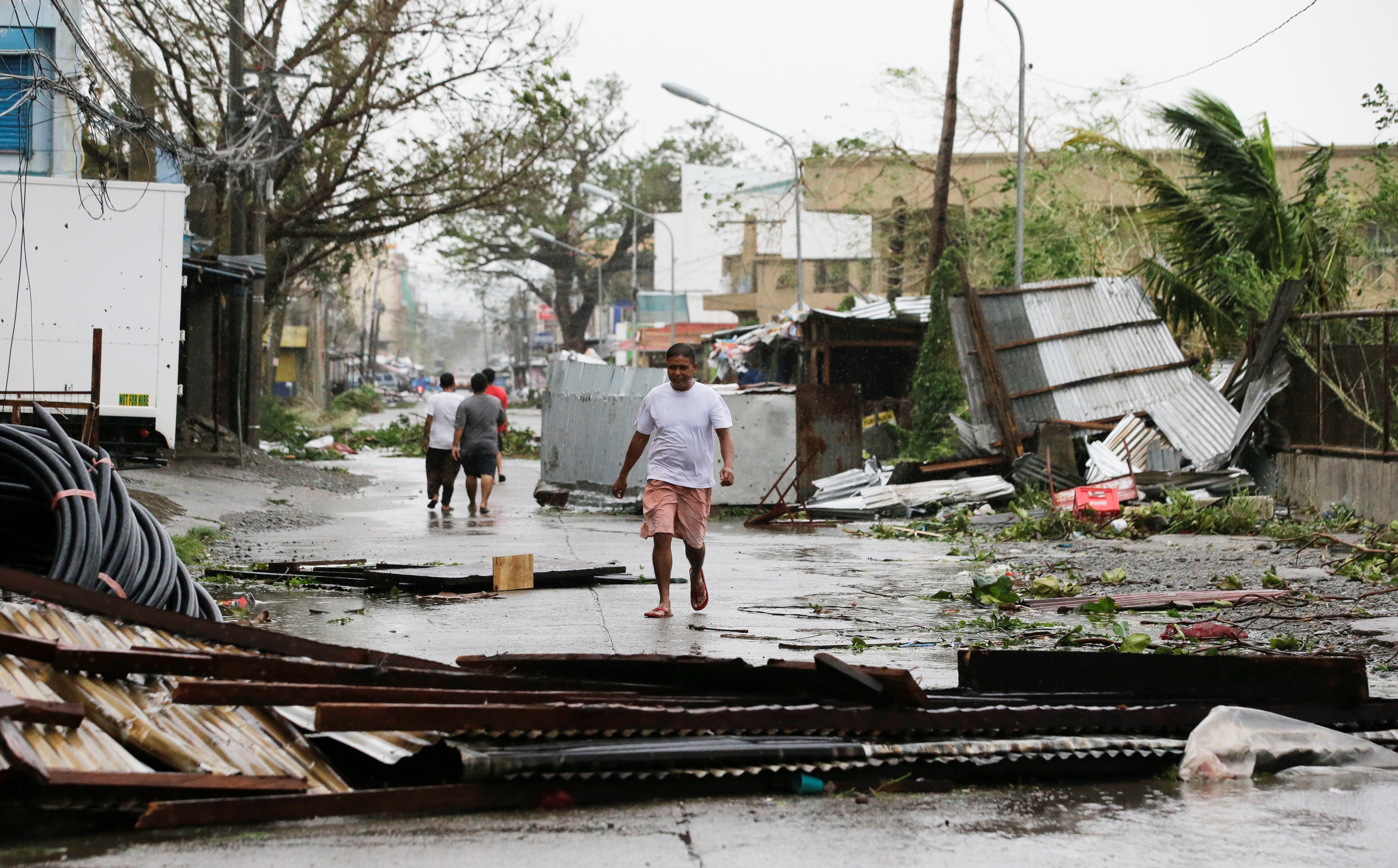 Mangkhut's sustained winds weakened to 170 kilometers (105 miles) per hour with gusts of up to 260 kph (161 mph) after it sliced northwestward across Luzon before blowing out to the South China Sea, aiming at Hong Kong and elsewhere in southern China.

About 87,000 people evacuated from high-risk areas of the Philippines. Tolentino and other officials advised them not to return home until the lingering danger had passed.

"It's still a life and death situation," Defense Secretary Delfin Lorenzana said by phone, citing past drownings in swollen rivers in mountain provinces after storms had passed.

Storm warnings remained in effect in 10 northern provinces, including Cagayan, which could still be lashed by devastating winds, forecasters said. Thousands of people in the typhoon's path had been evacuated.

Many stores and houses were damaged but most residents remained indoors as occasional gusts sent small pieces of tin sheets and other debris flying dangerously.

The Tuguegarao airport terminal was badly damaged, its roof and glass windows shattered by strong winds that also sent chairs, tables and papers flipping about inside, Lorenzana said.

The typhoon struck at the start of the rice and corn harvesting season in Cagayan, a major agricultural producer, prompting farmers to scramble to save what they could of their crops, Cagayan Gov. Manuel Mamba said.

A government damage assessment was underway except in areas still being battered by winds and rain. Two air force C-130 cargo planes and 10 helicopters were on standby in Manila, the Philippines' capital, to help transport rescuers and aid supplies.

More than five million people were at risk from the storm, which the Hawaii-based Joint Typhoon Warning Center downgraded from a super typhoon. Mangkhut, however, was still punching powerful winds and gusts equivalent to a Category 4 Atlantic hurricane.

In Hong Kong, Security Minister John Lee Ka-chiu urged residents to prepare for the worst as the storm barreled toward the southern Chinese city.

Cathay Pacific said all of its flights would be cancelled between 2:30 am local time on Sunday and 4 am. Monday.

"Because Mangkhut will bring winds and rains of extraordinary speeds, scope and severity, our preparation and response efforts will be greater than in the past," Lee told a briefing on Friday. "Each department must have a sense of crisis, make a comprehensive assessment and plan, and prepare for the worst."

In nearby Fujian province in China, 51,000 people were evacuated from fishing boats and around 11,000 vessels returned to port on Saturday morning.

Ferry services in the Qiongzhou Strait in southern China were halted on Saturday and helicopters and tugboats were dispatched to Guangdong to transfer offshore workers to safety and warn ships about the typhoon, China's official Xinhua News Agency reported.

Mangkhut, the Thai word for mangosteen fruit, is the 15th storm this year to batter the Philippines, which is hit by about 20 a year and is considered one of the world's most disaster-prone countries.