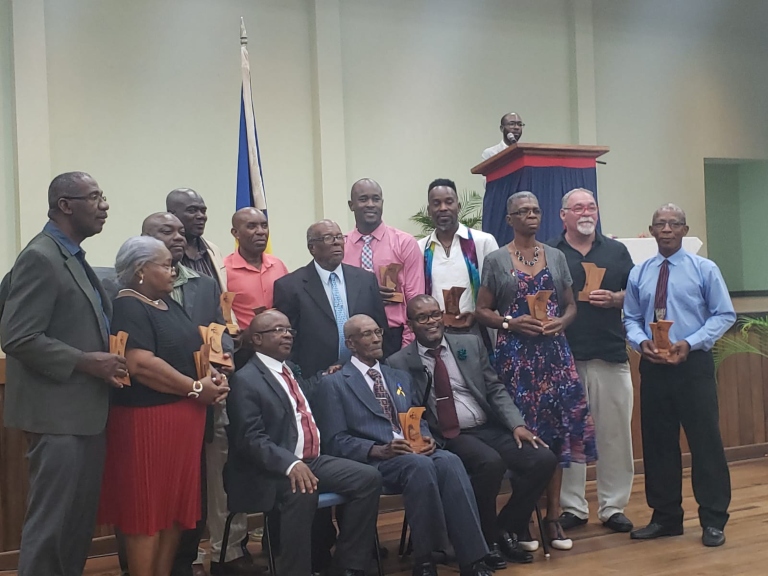 The parish of St Lucy recently honoured twelve of its residents at the first ever Pride of Barbados Awards ceremony.

These individuals were recognized for their sterling contributions to community life, both socially and economically. The presentation took place in the auditorium of the Daryll Jordan Secondary School last Wednesday evening.

Acting on behalf of Prime Minister Mia Amor Mottley, Minister of Housing, Lands and Rural Development, the Hon George Payne was on hand to present the awards.

In a brief address, he lauded the Prime Minister for her vision in conceptualizing the We Gatherin’ initiative. Additionally, he also commended both the awardees and the representative for the parish, the Hon Peter Philips for placing St. Lucy “on the map of excellence”.

Minister Payne praised Minster Phillips and his team in the execution of the events for the parish’s month of activities, which set the tone for the year. “What St. Lucy has done is that it has now set the barometer, and we know now what we have to do and I think it is to the credit of Peter [Phillips] and his team,” he stated.

Minister in the Ministry of Transport, Works and Maintenance Phillips also offered his commendations to the recipients of the awards.

"Your distinguished service to your community and country is well deserving. I congratulate you and urge you to keep making this selfless contribution. I urge others looking on to follow in your footsteps for there is none more honourable than to serve one’s country, one’s community,” he said.

The Pride of Barbados Awards will continue throughout the year-long We Gatherin’ 2020 initiative and continue thereafter each April 28th on National Heroes Day. It can be conferred on persons who reside or have resided in Barbados and who have been nominated by citizens or permanent residents of Barbados living in the respective parish, or who now live outside of the country.

We Gatherin' activities to hit St Lucy on January 1