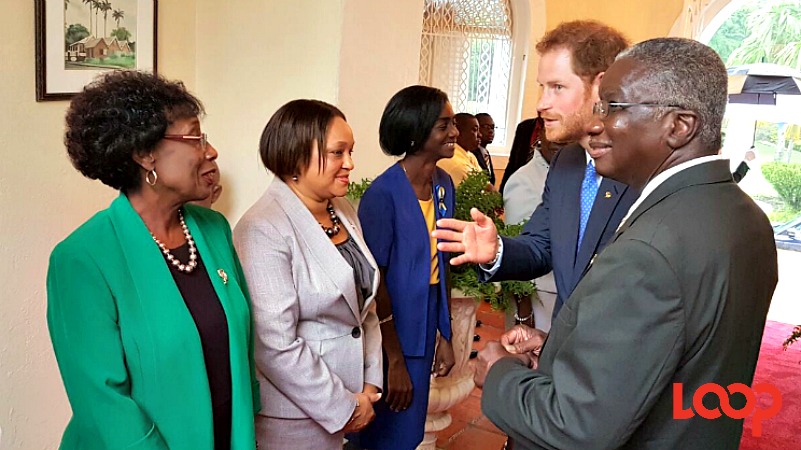 His Royal Highness Prince Henry of Wales, or Prince Harry, arrived in Barbados this morning for a three-day official visit.

After meeting with the Governor General at Government House, he paid a courtesy call on Prime Minister Freundel Stuart at his official residence, arriving at Ilaro Court in torrential rain around the same time that Barbados was placed under flood warning.

As Prince Harry greeted Prime Minister Stuart they chatted about… the weather!  How British!

The prince remarked, “I’ve never seen rain like this – never in my life.”

However, he agreed with Permanent Secretary in the Prime Minister’s Office, Sonja Welch, that at least this rain was “Caribbean rain” – warm!

The rest of the welcome party included Senator Maxine McClean, Chairperson of the National Committee for the 50th Anniversary of Independence; Permanent Secretary in the Prime Minister’s Office, Sonja Welch; and Cabinet Secretary Andrew Cox.

Prince Harry and PM Stuart then conducted their courtesy call and exchanged gifts.

At the end of his visit he greeted members of Ilaro Court staff who have been working there for over 20 years.

Ms. Green told Loop News that the meeting with Prince Harry was “quite pleasant” as he enquired about their tenure at Ilaro Court.

Prince Harry wished them all a Happy Independence before signing the Ilaro Court guestbook and being escorted back to his vehicle to a luncheon at Government House.

Prince Henry’s busy day will continue with a tour of two recently-renovated buildings at the Nightengale Children’s Home in Black Rock, St Michael, after officially opening the facilities.

He is later scheduled to attend one of the most anticipated events of the day, as he is set to place the gnomon on the sundial in the 50th Anniversary of Independence Monument at the unveiling ceremony at the Garrison Savannah tonight. However, with Barbados under flood warning and the Garrison Savannah being one of the locations with flooding, uncertainty hangs over tonight's festivities.